For the seven-year period of 2012 through 2018, airlines lost or damaged an average of three checked bags per every 1,000 air passengers, according to Department of Transportation data. A new report from LuggageHero based on the DOT data found that some airlines do a lot worse than average, however—with mishandled or lost luggage rates that are double the average. 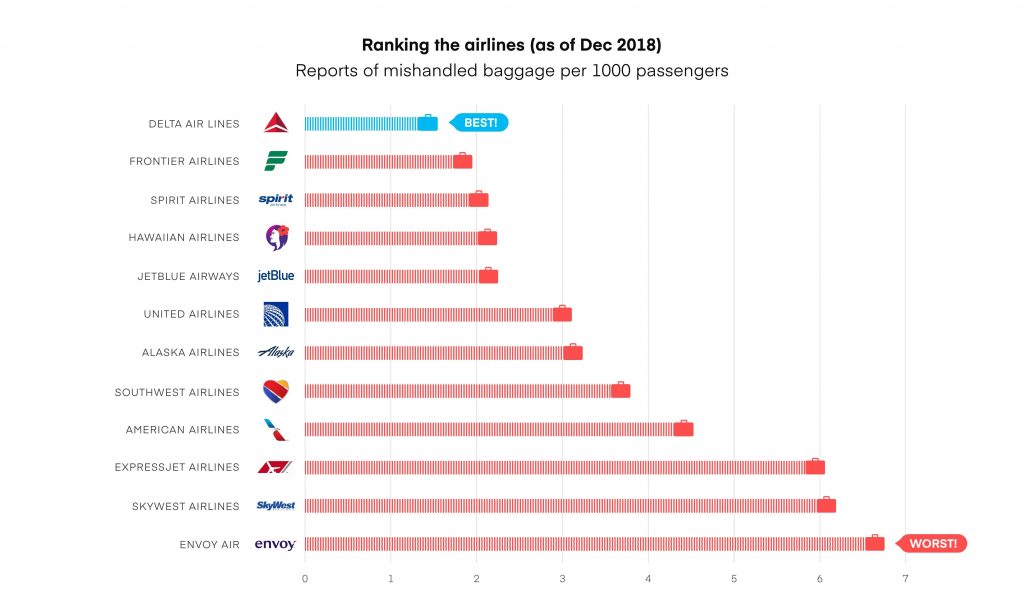 Lost Luggage? Here’s What to Do

Here’s how the other big carriers ranked for damaged or lost luggage:

The regional lines that feed bigger lines at major hubs—Express Jet, Skywest, and Envoy—all clustered at the very bottom of the performance numbers, mishandling six or more bags per 1,000 passengers.

Comparing performance numbers over a seven-year span has an advantage over the more frequently posted yearly or monthly figures: Seven-year data smooth out the uneven levels of performance caused by unusual weather problems, strikes, airplane groundings, and such. The big disadvantage, of course, is that seven-year figures do not allow for genuine improvement over an extended time span.

Still, the most recent almost-annual data from the Department of Transportation show a similar pattern for the period January-November 2018:

Overall, good baggage handling is one of the several customer-service performance metrics that contribute to Delta’s emerging position as consistently outperforming rivals American and United.

LuggageHero, the source of the DOT data analysis, is one of the several new onsite agencies that arrange temporary baggage storage at multiple locations around big cities. It’s a useful service for travelers who need someplace to stash their stuff during those awkward hours between when they have to check out of a hotel and when their late plane or train leaves, or for any of other reasons.

As a methodology note, the Department of Transportation stopped releasing data on mishandled baggage in December, 2018, pending development of new metrics. And as a nit-picking grammatical note, hardly anybody recognizes a distinction between “baggage” and “luggage” these days: The official term in airline tickets and contracts is “baggage,” but lots of people seem to use the two terms interchangeably. The actual distinction is still there, as in this formula: Luggage plus your stuff in it equals baggage.