What’s worse: sitting in the middle seat on an airplane or having a hole drilled in your head? More than half of respondents to a 3M/Global Strategy Group survey a few years back would rather go to the dentist than tell a seatmate, “Excuse me; I need to go to the bathroom.”

The survey also determined the top five airplane middle seat annoyances as follows (the survey allowed multiple answers, so the stats below reflect the percentage of people who chose each option):

As airlines try to maximize the number of people on each plane, continue in the old practice of overbooking, and reduce (or charge for) opportunities to make changes to our airline reservations, frequent travelers are almost doomed to a middle seat experience at some point. On a typical commercial flight within the United States, about 50 unfortunate souls will be relegated to the dreaded middle seat. What can you do if one of those tortured passengers is you? Here’s how to survive the middle seat on a long flight.

6 Things Not to Wear on a Plane 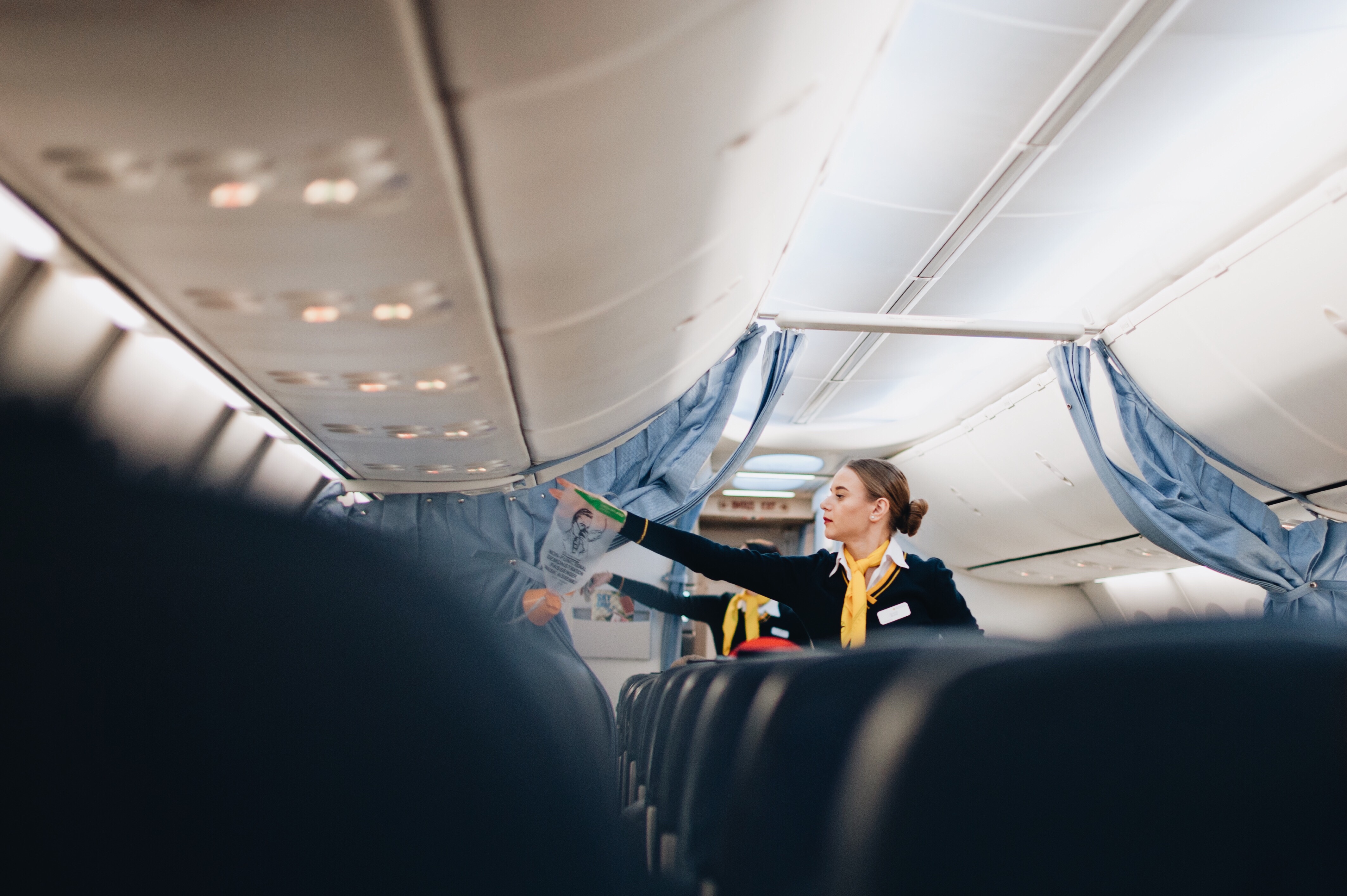 Typically your first chance to avoid the middle seat of an airplane is to select an aisle or window when you first book your flight. (This is free on some airlines and available for a fee on others.) Book as early as possible to land yourself better choices.

If only middle seats are available or you’re pre-assigned to one despite your preferences, it might still be possible to make a last-minute escape not only out of that middle seat but into a far better seat. Check in online as far in advance as you can (usually up to 24 hours) and look at the seat map on your flight to see if any better seats have become available, or even if you can pay for an affordable upgrade. If you hate the middle seat as much as most people do, the fee may be worth it—especially on longer flights.

For airlines that don’t allow advanced seat selection (like Southwest), check in for your flight as soon as you can (in Southwest’s case, as early as 24 hours in advance). Because Southwest assigns boarding groups based on when you check in for the flight, the earlier you check in, the more likely you are to board early and snag a better seat.

If you don’t have any luck online, you can try again at the airport check-in counter—just be sure to arrive early to get ahead of everyone else trying to do the same thing. You can increase your chances by not only asking for a seat change or an affordable upgrade, but also inquiring whether you might be booked into an exit row seat (which often costs extra).

If the check-in agents are unable to do this for you, I suggest you try again at the gate. These folks have final say on seating arrangements, and in my experience this last opportunity is also your best opportunity. Your odds get better if you are among the first in line, are polite, and have some mitigating circumstance (this is the time to speak up if you’re a frequent flyer on that airline or if you’re so tall that sitting in a middle seat is particularly uncomfortable for you).

If you missed your opportunity at the gate, you one last shot at a better seat location by asking the flight attendant. Once everyone’s boarded and the plane’s cruising at a high altitude (but before the drink trolley comes out), politely ask the flight attendant if a window or aisle seat is open. Chances are, the empty seat will move you to the rear of the plane, but at least you won’t be the meat section in a seat sandwich.

10 Ways to Get the Best Airplane Seat

Travelers get confused about proper armrest etiquette on full planes, but my rule of thumb has worked well for me over many years and countless flights: The person in the middle seat has priority when it comes to positioning on the armrests on both sides. If that person prefers to stake out the space closest to the seatback, he or she gets it, and other folks in more comfortable seats get the slightly less comfortable part of the armrest. I’ve only sat next to a few folks who seemed to think they were entitled to all the space around them irrespective of seat assignments, and they had no respect for personal space of any stripe or type—I think a couple of them would have put on my headphones or eaten my food if I had allowed it. (See 12 Annoying Habits of Our Fellow Travelers.)

Speaking of claiming space, do so for your knees as well. In such close quarters, every little inch counts. Politely ask the passenger in front of you to refrain from leaning their seat back if it really bothers you.

Do You Have to Switch Seats If Someone Asks?

Go Before You Go

If ever there was a time to behave like a 4-year-old and visit the lavatory in the airport immediately before leaving, this is it.

Use Sleep and Comfort Aids

By this I mean neck pillows, eye masks, ear plugs, and other products that make it possible to sleep or rest fully while sitting straight up with nothing to lean on.

Also, take advantage of your surroundings. Aside from occasionally holding a drink or a meal, the tray table doesn’t have much to do during a typical flight. Make use of it by taking an in-flight nap. No need to invest in an embarrassing Ostrich Pillow, however. Roll your jacket into a makeshift pillow, fold forward at the waistline, and snooze away. Whatever you do, though, don’t place your face directly on that petri dish of bacteria (a.k.a. the tray table), or at least disinfect it first.

If a tray table nap isn’t your speed, sleeping upright is also a possibility—even in the middle seat. It starts by picking the perfect travel pillow for your body, whether that’s a standard neck pillow, a shoulder-wrapping Travelrest Pillow, or even a candy cane travel pillow. You can also consider space-saving inflatable pillows.

Sleeping on Planes: 13 Tips for Travelers

Ever notice how time seems to fly by when you’re busy? With Wi-Fi being added to more planes all the time, and new netbooks and tablets better suited than bulkier laptops to the confines of coach class, the airplane is more than ever before a place to work, watch movies, and surf the web. Burying yourself in the work directly in front of you can grant you some escape from the close quarters of flesh on all sides.

Invest in noise-canceling headphones. For just a few hours, a pair of good headphones can be a middle-seat passenger’s best friend. The right set tuned to a good movie or music can take your mind off the otherwise muscle-contorting rigors of the middle seat. You’ll also want to keep the following items handy for in-flight sanity in the middle seat: electronics (a tablet, laptop, or handheld game console), a good novel or puzzle book, and snacks.

In a middle seat, your exposure to neighbors is doubled, thereby also doubling your chances of having an overly talkative or prying neighbor. This is great if you’re interested in a long chat, but if not, employ some of the products above, even as a decoy, to telegraph your unavailability to garrulous seatmates. Again, think eye masks, books, magazines, iPod earphones … anything that closes off some of your senses to your neighbor’s invasive utterances will do the trick.

Be aware of the amount of stuff you’re carrying on with you, though—the middle seat is cramped enough without also giving up all of your legroom to a backpack filled with absolutely nothing you need in flight.

10 Ways to Survive a Long-Haul Flight

If you end up in a middle seat for a flight of any duration, it will help if you accept early on that it ain’t gonna be fun, easy, or comfortable, so you might as well make the best of it. Sooner or later you will find yourself on the ground, with no one banging your elbows or slamming your knees. In other words, as the adage says, this too shall pass.

What to Wear While Traveling this Season

Men’s Comfy Outfit to Wear on a Flight

Women’s Comfy Outfit to Wear on a Flight

Men’s Casual Jean on Jean Outfit for the Fall

Women’s Outfit for Traveling in the Fall/Winter

Women’s Casual Oversized Scarf Outfit to Wear in the Fall

Men’s Cool Jacket from Everlane Outfit for the Fall/Autumn

Editor’s note: This story was originally published in 2017. It has been updated to reflect the most current information. Patricia Magaña, Ed Hewitt, and Margaret Leahy contributed to this story.