There’s a silver lining for Britain-bound travelers in the wake of the United Kingdom’s vote to leave the European Union: Insanely cheap flights and hotel rates are springing up. Americans in particular have perhaps the biggest advantage in the post-Brexit bookings race thanks to a strong U.S. dollar and low oil prices.

Here are three simple rules to keep in mind when booking a U.K. jaunt for far less than you could have just weeks ago.

Flying to London from the United States is (on average) the cheapest it’s been in thirty years. Don’t believe me? The data doesn’t lie.

Fares dropped 14 percent after the June 23 vote, and air deal sites have been going crazy alerting their users to steals. I’ve seen flights dip below $300 round-trip on some routes.

Master Google Flights with These 5 Tips

To get the lowest airfare, book based off of these fare alerts. Subscribe to a site that will send you the cheapest options from your airport as they emerge, like AirfareWatchdog, Travel Pirates, or Google Flights alerts. This will ensure that you’re not missing out on great deals that sell out fast. 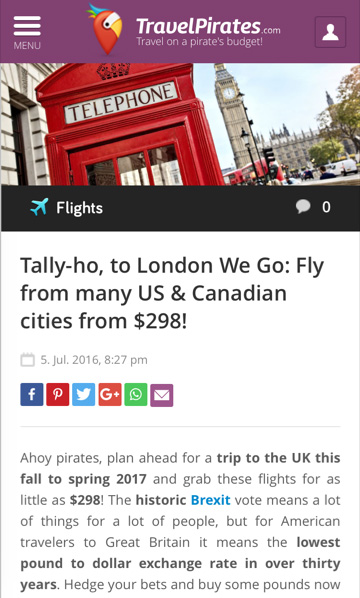 The chances that booking at your leisure will fall during these short-lived sales are very slim. That’s why it’s important to get notifications and book fast once you find a flight that fits your needs. Whether you’re at work or in bed by the time it lands in your inbox, speed is key.

If you already booked a U.K. trip before the Brexit and feel like you’re missing out on these savings, it’s not too late to get a deal on a hotel. The shakeup is making the pound’s value sink, which means everything in the U.K. is basically at a discounted price compared to pre-Brexit costs. Hotels are also slashing prices to fill rooms as their stocks plummet.

Why? U.K. hotels (and the country’s hospitality industry in general) rely largely on workers from outside the U.K., and their futures are now questionable as the country and Europe renegotiate immigration, labor, and trade regulations. According to Skift, the biggest drop in hotel stock after the vote fell on one of the world’s largest hotel companies, Marriott, which took a 5 percent dive.

This means your chances of finding a cheaper hotel are high. If you can cancel a lodging reservation without penalty, do it and follow hotel deal alerts just as people are using fare alerts. Massive cities like London (and even Manchester, and Scottish hubs like Edinburgh) always have rooms available, so you’ve got nothing to lose by waiting for a better rate to come along.

As bad as the chaos of Brexit may be for Britons and Europeans, travel to the U.K. is still important for their economy. There’s no denying that this is likely the best time to get a lot more value even beyond lowest-price bookings.

While a lot of people will be looking to grab the cheapest fares and rates, it doesn’t hurt to take a look at what upgraded lodging and flights will cost. Bumping up to a nicer room or better airline might not be as expensive as you’d think. Non-budget airlines and luxury hotels are not immune from the market chaos.

Think of it as an investment in the U.K. when the country needs it most.