Solo female travel is more popular than ever. Women aren’t waiting around for someone to join them in their pursuit of adventure, they’re going on their own. It’s becoming increasingly easy to join an all-women tour group of like-minded people to explore complex destinations. But many women still opt to truly go it alone, to see what it’s like to see and do whatever you, and only you, want.

I didn’t think twice when I recently had the opportunity to spend some time solo in Amman before meeting up with a tour group to hike the rest of Jordan. But I was surprised at how many of my fellow female travelers were concerned to hear I’d be exploring a Middle Eastern locale alone.

Tips for Solo Female Travel in the Middle East

While every destination is, of course, different, I found out some surprising truths about taking on solo female travel during my time in Amman. And in comparing the journey to a subsequent trip to Cairo, during which I spent the majority of my time exploring with Egyptian friends, I discovered some general tips that tourists and locals seem to agree travelers should keep in mind.

Bring Your Awareness, But Also Your Self-Confidence

While it’s important to know that the Middle East is culturally different than other destinations when it comes to gender dynamics, it’s just as important to be yourself and have fun. Respect the culture by dressing the part (more on that below) and following social norms, but don’t spend the entire time worrying about a misstep. You’ll enjoy the ride more if you bring your sense of humor: having your guard up too high can at best result in missed opportunities and learning experiences, and at worst offend others. Many countries in the Middle East, Jordan and Egypt among them, are known for their generous hospitality and sense of humor—two things you don’t want to miss out on by shutting yourself off.

The biggest social norm I learned about in Amman is one I thankfully didn’t transgress despite my ignorance to it: gendered seating sections. Some restaurants have “family” sections, which are designated for any party that has women and/or children in it. There are different sections for men-only groups and solo men, and sitting in the opposite section (either as a man or as a woman) is a no-no; if you accidentally end up in the wrong section you’ll be asked to move. Restaurants that are popular with tourists typically don’t use these seating arrangements anymore, but if you get off the beaten path, it’s a good idea to survey the tables and wait for an employee to seat you, rather than pick a table yourself. 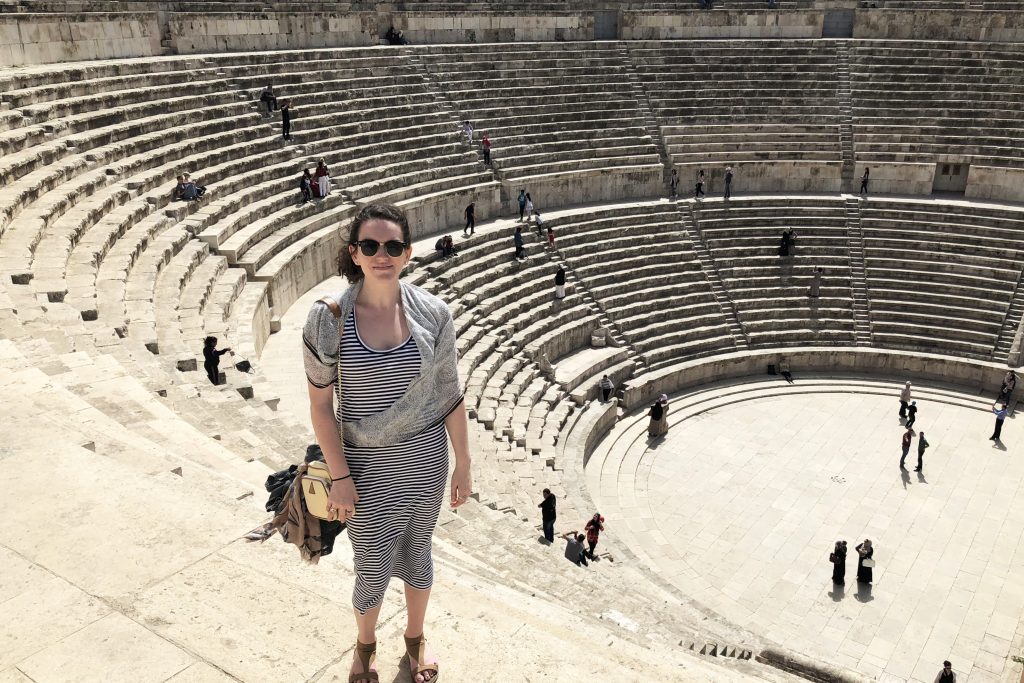 While some might think of solo female travel as a challenge, it’s actually a surprisingly underrated way to meet people—especially local women. When in doubt, a good rule is to seek out other women. Need directions? Ask a group of women. Taking public transit? Sit with or stand near other women.

In my experience, friendly local men seemed to be more likely to go out of their way to ask me if I needed directions, to suggest things to do, or just to chat about where I’d been. But I made sure to seek out women when I felt like I needed help, and I got a lot in return. For example, I asked a woman near me in line at Amman’s Roman amphitheater (pictured above) about the entry fee and, unprompted, she bought me my ticket to save me money. (Tourist rates are typically much higher than the locals’ ticket rates.) The gesture made me feel welcomed and comfortable at a time in my trip when I had been feeling vulnerable.

The best way to deal with moments of doubt or discouragement in solo female travel is to see if a local might be able to help. Some might even go out of their way to help you, as both women and men did for me in Amman.

In Hiking Jordan, a Window to a Peaceful Middle East

Be Ready for Attention

Because it’s not common for women to be out and about on their own in many places in the Middle East, you’re likely to get more attention than you probably do in other destinations. Groups of schoolgirls in Jordan, for example, quickly became my biggest fans—asking for selfies and giddily practicing their English. But that attention can, of course, manifest in less welcome ways: Unwanted staring, photo-taking, comments, and other advances can happen. The best way to deal with such situations is to ignore them, or simply say “no” and move on. If that doesn’t work, or if someone seems to be following you, head to a place like a hotel lobby or a shop where an owner or employees are present. If anything more happens, seek out local tourist police, who can be found in most city centers and at most tourist attractions, and who take crimes and threats against tourists very seriously.

An obvious way to avoid unwanted attention is to blend in. Dressing in Middle Eastern cities is different than in many other destinations, and what you pack should reflect that: Even when it’s extremely hot out, women are expected to cover up. The general rule is to wear modest clothing that will cover you from your neck to your knees, and to carry something like a pashmina for times when you need to cover up your shoulders or hair to enter sites like mosques—which are beautiful historic sites you won’t want to miss. Most mosques that are popular among tourists allow uncovered hair, but it’s a good idea to have a back-up scarf just in case you’re not as covered as you might need to be.

Modest Travel Clothing: What to Wear When You Need to Cover Up

To me, the incredulity about why I wanted to explore Amman alone was a symptom of a larger problem: People love to project other countries’ problems onto themselves, when in reality, it’s locals—not visitors—who are most often affected. Prejudice against women in Middle Eastern countries is largely not directed at tourists, but rather toward the women who live there. It’s often a privilege to be a visitor in the Middle East; most destinations cater to Western visitors because the region depends on tourism, which has greatly diminished for the Middle East in recent years. Of course, it’s always wise to be careful as a tourist in any destination, but it’s also important to remember that people sometimes overestimate the ways in which a problem will actually affect them as a visitor.

Visiting the Middle East as a solo female traveler is a unique learning experience that has both challenges and advantages. There was certainly some must-know advice I didn’t know before I went, but that I thankfully found out from locals before making any faux pas. But that’s the value of travel, and I look forward to exploring another Middle Eastern city on my own one day.