Delays, cancellations, and overbooking seem to be dominating headlines about travel recently. But what should you do when those stories become a reality, and you suspect an airline has violated your passenger rights? A website called AirHelp could be the answer.

Last spring, I took a flight with Norwegian Air from Boston to London-Gatwick. It was one of the first flights on the new transatlantic route, and my parents and I were excited to try the airline, which had been getting a lot of buzz. Things took a turn for the worse when our 9:00 p.m. flight was delayed until 11:00 p.m. Not a huge deal, we thought: We’d still get there pretty much on time. But then 11:00 p.m. passed with no sign of a plane, or even a gate agent. Instead the plane arrived at 1:00 a.m. We took off an hour later.

What Are My Rights If My Flight Is Canceled?

The airline gave no explanation and no point of contact, and only handed us a $5 food voucher at the time of the initial delay. There was no bad weather at play and all other flights that evening went out, so I knew the delay had to be Norwegian’s fault.

Because I work in the travel industry, I knew my rights as a passenger had been violated. Since I didn’t want to ruin the rest of our day or vacation by arguing with the airline at the airport, I decided to do some research when I got home.

After trying on my own to understand the ins and outs of contracts of carriage, transatlantic flight regulations, and different European airline rights, I was at a loss. Then I came across a website called AirHelp. Upon an initial eligibility check, AirHelp said my parents and I were entitled to at least $300 each. That sounded more like what I thought the airline owed us since there was no “act of God” cause for our delay. So I decided to go through with the process.

The Basics: What Is AirHelp?

AirHelp can submit a claim to an airline on your behalf about flight disruptions. The service handles four different types of claims: flight delays, flight cancellations, denied boarding, and luggage problems.

The Process: How Does AirHelp Work?

AirHelp doesn’t cost anything upfront (more on that later), which made my decision to try out the service easier. Users must enter information like departure airport and destination, connecting flights, flight numbers, and dates of travel, so have your itinerary handy.

If AirHelp thinks you have a case, it’ll submit a claim directly to the airline. If the airline denies your initial claim (as Norwegian did for mine, and many airlines do), AirHelp takes it to court for you. This mostly requires you to sign off on some legal documents. AirHelp kept in constant communication during my case.

Due to the nature of my case (transatlantic flight, international airline, etc.), I was told my claim would take a little longer than average. It took about 10 months. However, I didn’t have to do much else after signing Power of Attorney documents, and I was pleasantly surprised to get an email recently with my final claim amount. The website says the average time to resolve a claim is two months or less.

If AirHelp wins your claim, you can choose to have the money delivered to you electronically (for no additional fee) or by check. I selected the electronic transfer option, and the money was in my bank account the next day.

How Much Does AirHelp Cost?

AirHelp charges a 25 percent administration fee based on your claim amount, which is pretty steep. However, it takes a lot of work, knowledge, and time to file a claim, and many average passengers don’t have the prowess to do it on their own. Additionally, if AirHelp takes your claim to court, there is an additional legal fee that is taken out of your final claim amount.

Basically, AirHelp only gets paid if you win your case against the airline and receive compensation, so either you get compensated (minus the administration fee and in some cases legal fee), or you don’t lose anything if your claim is denied and/or you don’t go through with the legal process.

If you’ve experienced a delayed flight and receive zero (or very little) compensation for it, try an AirHelp eligibility check. If you’re entitled to a few hundred dollars, you don’t have anything to lose by submitting a claim.

Here’s the breakdown of my final settlement for three passengers: 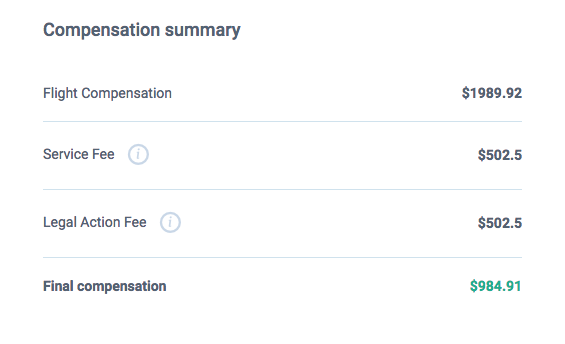 Yes, the service fees and legal action fees add up, and seeing how much you could have gotten is a tough pill to swallow. However, there was no way I would have filed a claim or gone to court for compensation from the airline without AirHelp. Being able to file a joint claim with my parents instead of three different ones helped streamline the process.

Don’t just take it from me. I spoke with a few other AirHelp users who all said the same thing: that the process was easy, well managed, and worth it in the end.

The company also provided me with a few stats on compensation amounts and success rate with its claims: AirHelp has a 95 percent success rate so far, winning more than 30,000 cases that have gone to court.

How Can I Prevent Lost or Delayed Bags?

AirHelp also reports that it has helped more than two million air passengers regain a total compensation of $195 million since 2013, with an average payout of $600 per individual passenger. The average compensation for lost or damaged checked luggage ranges from $1,500 to $3,500.

Even if you’re not eligible to file a claim, AirHelp’s website is super-helpful. It has resources and explanations for your rights on European airlines, U.S. airlines, and more. AirHelp even ranks airlines and airports worldwide.

Moral of the story: Don’t settle for a $5 food voucher next time your flight is delayed.

You Tell Us: Would you try a service like AirHelp?