London and New York aren’t just two of the most famous cities in the world—they’re also prime competitors for the same tourism dollars. So when it comes down to London vs. New York, which city should you visit? The answer depends on what you’re looking for in a vacation. Here’s how to choose. 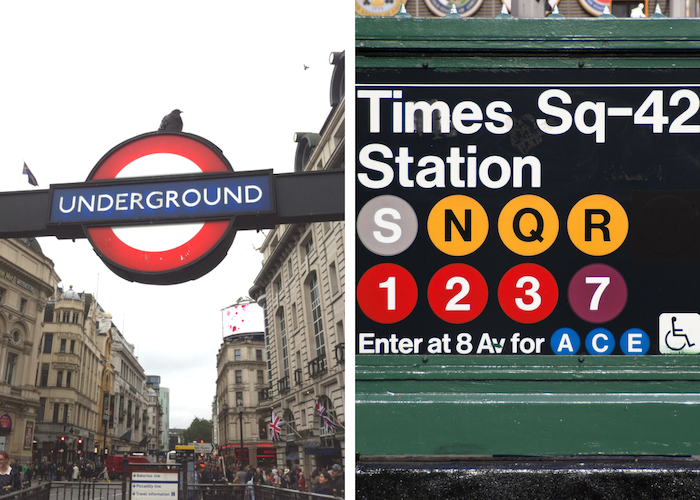 Cost: A ride to anywhere on the MTA system in New York will cost you a flat $2.75. In London, you’ll have to do some math to calculate your fare, as it’s broken down by zones. You’ll also need to swipe your ticket in order to exit the tube, which is highly annoying.

Interior Design: I will never understand why London’s tube has carpeted seats. At least when things go awry in the biohazard department on New York City’s subway, you can just hose down the plastic seats. Although you’ll be uncomfortably packed into the cars in either city during rush hour, the tube is significantly narrower and shorter, adding to the claustrophobia.

Delays/Construction: There’s no real winner between London vs. New York here. Expect random delays and plenty of construction work in both cities.

Safety: If you’ve ever feared being pushed under a subway train, you’ll appreciate the sliding glass doors at some London tube stations that won’t open until a train is in the station. New York offers no such safety measures.

Hours: New York, the city that never sleeps, runs its subway 24-hours a day. London offers limited “night tube” 24-hour service, with many lines shutting down earlier in the evening. When the tube isn’t running, you’re left to the mercy of the unreliable and often rowdy “night bus.”

Tickets: Simply tap your plastic Oyster card to the barrier to open the doors without breaking your stride in London. In New York, you’ll have to fumble to slide your flimsy paper card in order to get in.

London Vs. New York Transportation Winner: New York, for not making us do math in order to ride the subway and for being open 24-hours. London Vs. New York Food Winner: New York, for both its variety and overall quality. 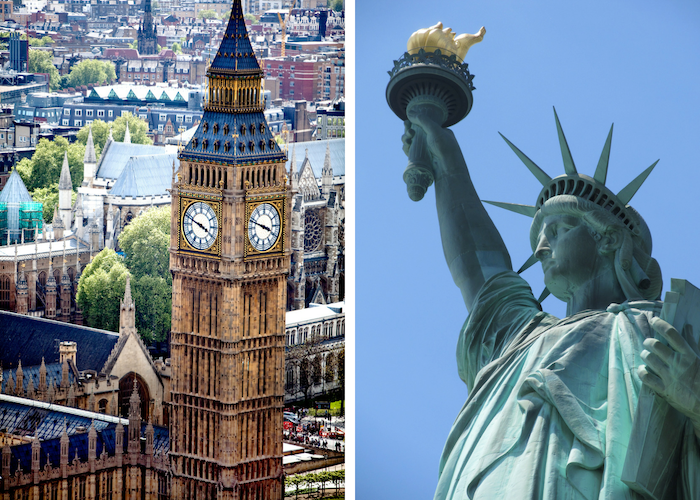 History: London has been around since approximately 50 C.E., whereas New York City didn’t come along until 1624. So London definitely crushes New York on the historical culture front—at least if you’re interested in ancient history. New York’s history is obviously shorter, but there’s plenty of it squeezed into a few centuries.

Museums: London has the British Museum. New York has the Met and the Museum of Natural History. In terms of quality, it’s a toss-up, but based on sheer quantity the edge goes to London. It has more than double the number of museums vs. New York City.

Accessibility: Much of London’s great culture is accessible to anyone—most of its museums, concerts, and some theaters are free.

London vs. New York Culture Winner: This one’s close, but the edge goes to London for, once again, sheer quantity of options. 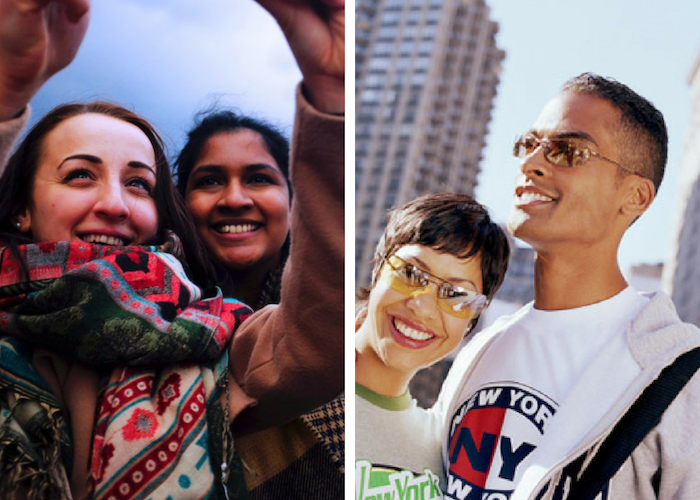 Locals in both cities have no patience for hapless tourists who get in their way and commit egregious errors like standing on the wrong side of the escalator or stopping on the sidewalk for pictures. But if you stop a local on the street to ask for directions, both Londoners and New Yorkers are likely to help you get where you need to go.

Traveling alone and looking to have a chat? I bet you’ll have much better luck in a London pub than in a New York City bar, so my vote here goes to London. 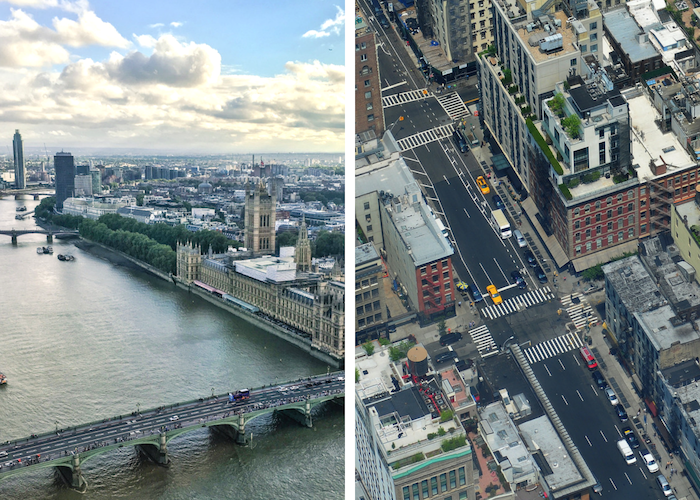 Before Google Maps became ubiquitous, Londoners relied on an A-Z street map book which helped them find random street names. That’s because London’s street names have no logical design to them.

In New York, at least some of the city is designed in an easy to navigate grid system. (You’re on your own in Lower Manhattan and some of the outer boroughs, though). 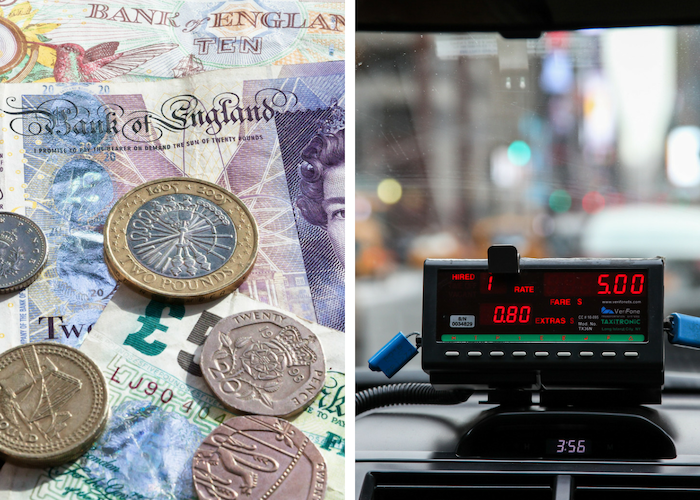 Brexit kind of changed the game on this one. London used to be a serious investment for vacationing Americans, since the exchange rate so strongly favored the GBP. Now things are a little more even with 1 USD equaling 0.76 GBP (check current exchange rates at xe.com). You’ll still be taking a hit, but it’s a much smaller hit.

The cost of living is about equal, with New York City being slightly more expensive. According to Numbeo.com, you’d need about $7,748.16 to maintain the same standard of life in New York that you could have in London for about $6,050.47. With the currency exchange, it winds up fairly even.

London Vs. New York Cost Winner: This one’s a tie. Both cities are about equally expensive. 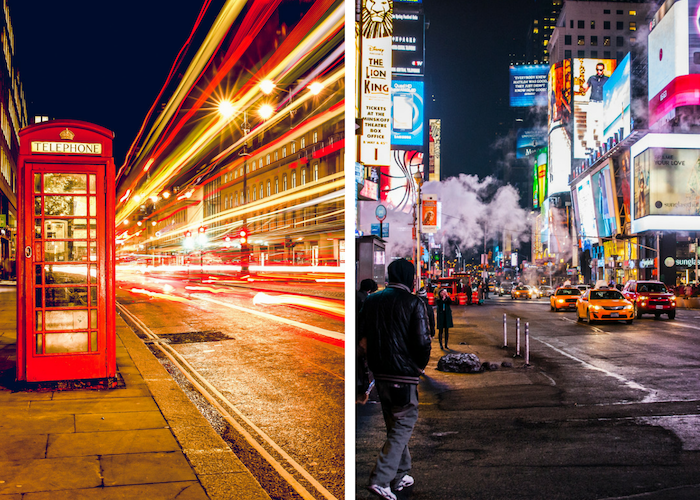 In New York, there are really only three hours that you can’t be out partying (legally) if you so desire. Bars close at 4:00 a.m. and reopen at 7:00 a.m. (except on Sundays).

Many pubs in London have last call at the shockingly early hour of 11:00 p.m or midnight. After that, you’ll have to search out a spot (mainly the bigger dance clubs) that are open until 2:00 a.m. or have a 24-hour license.

At least in London, you’re allowed to drink in public (except on the tube), so you can always take your party to the streets.

London vs. New York Nightlife Winner: New York. It’s not called the City That Never Sleeps for nothing! 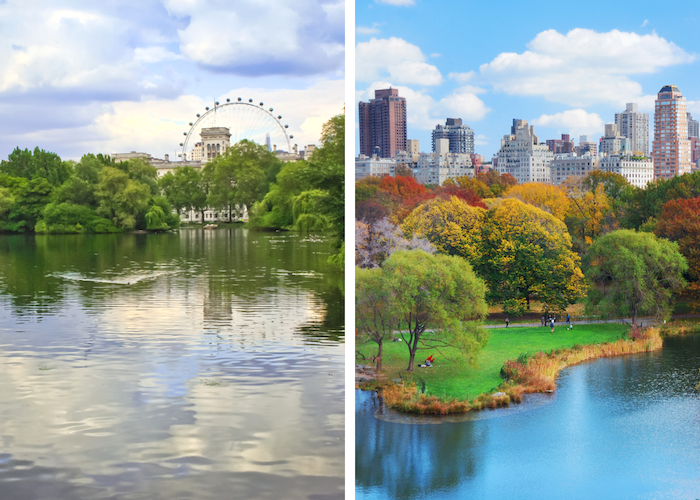 Both London and New York do “urban oasis” well. But only London’s parks have lounge chairs to rent, ponds that you can swim in, beaches,  and a professional outdoor theater.

Also, London is actually made up of 62 percent green space vs. New York’s paltry 14 percent. Then again, New York has Central Park. 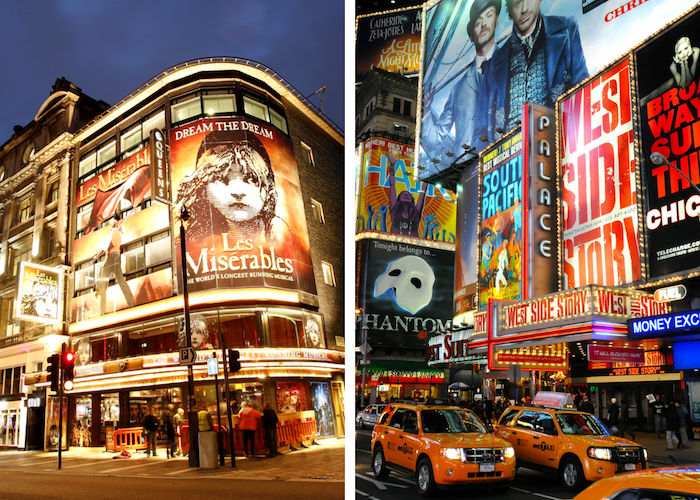 It’s theater vs. theatre in this showdown. London wins it again on the historical front, having hosted history’s most famous playwright, William Shakespeare. Now you can watch his works (and others) at Shakespeare’s Globe Theatre, a reconstruction of the original, which was destroyed in 1613 by a fire. For more modern works, the West End district is the equivalent of New York’s famed Broadway, with numerous theaters hosting plays and musicals.

New York takes it on the iconic front—most actors say they’re going to make it on Broadway, not in the West End, and you can’t get more famous than having your name in Broadway lights.

Both cities put on free plays in public parks, and both attract world-famous stars to tread their boards. 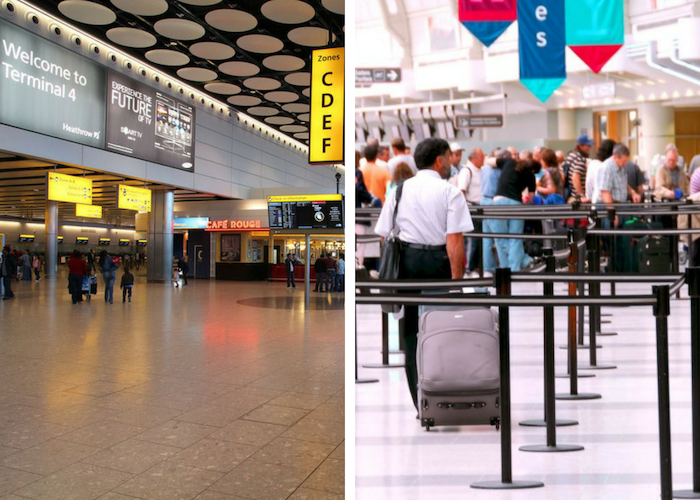 London is served by five major airports (Luton, Stansted, City, Heathrow, and Gatwick). New York only has three (LaGuardia, JFK, and Newark). New York loses another point for having LaGuardia, which consistently earns a place on every “worst airports” round-up. (Probably because it only has two runways.)