Setting out on a long-haul train journey has been dubbed ‘land cruising’ for good reason. The unique mode of transportation, not just the destination, is the focus—similar to ocean and river cruises. Traditionally, rail “cruises” include at least two overnight stays onboard, with a private compartment in a sleeping car.

If you’re willing to pay north of $1,000 (per person) per night, you can find lots of ultra-luxe rail excursions. With private train operators such as Belmond and Golden Eagle, you can ride in refurbished heritage cars or new purpose-built cars, many including compartments with private showers, along with elaborate lounge cars and opulent dining cars. These trips can be up to two weeks long—and can cost a fortune.

But a few long-distance train journeys, operated by regular railway companies, provide a “land cruise” option at prices comparable to those of ocean cruises. Here are a few of the best that run for at least two nights, and offer two-person sleeping compartments.

Amtrak fares are capacity driven, meaning that cheap seats sell out early. For a test trip in mid-April, a two-person roomette on the California Zephyr is $656, but fares at other times can be close to double that figure. The roomette has two bunked beds, (one is an upper, so at least one person must be nimble enough to climb up the small ladder); the room has a washstand, and the shower is at the end of the car. The fare includes all meals. Amtrak offers minor senior and other discounts, but only for the base rail rate; discounts do not apply to sleeper accommodations.

Canada: VIA Rail, The Canadian 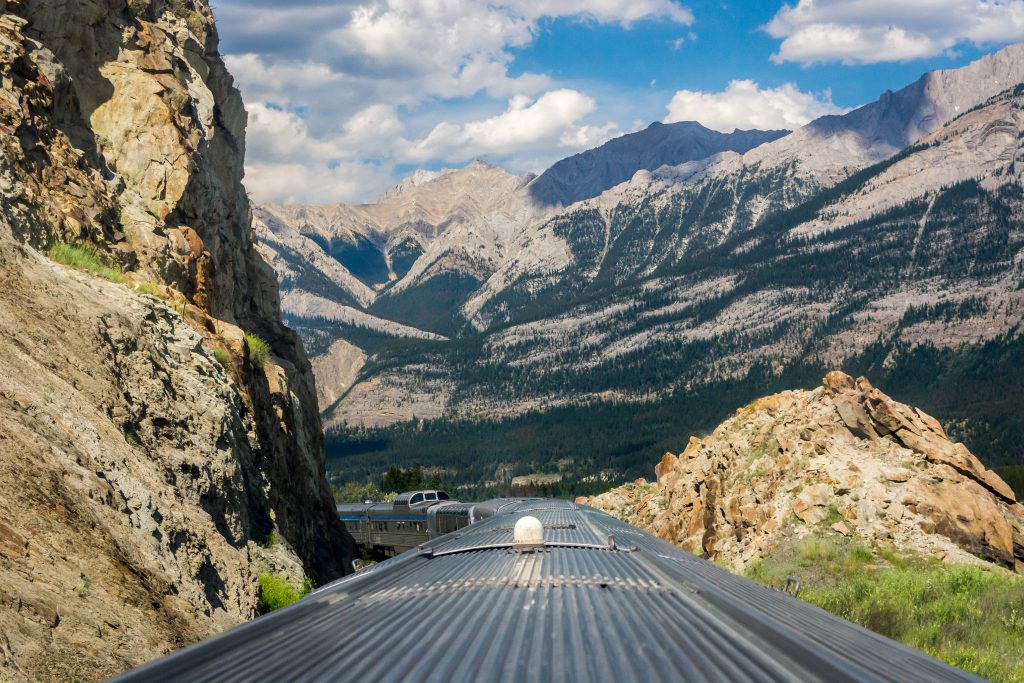 The top land cruise in North America, VIA Rail’s The Canadian, runs twice weekly from October 14 to May 1, and three times weekly during the summer. The most scenic portion of the three-night, 82-hour trip is riding through the Canadian Rockies, with a bit more daylight viewing eastbound rather than westbound. Two-person cabins on VIA Rail are bigger than roomettes on Amtrak, with a lower and upper bed and a toilet; the Canadian also includes some one-person cabins. The fare for a sample trip in mid-April is $2,883 for a couple, including all meals. Discounted tickets are typically available as last-minute deals, at around $2,000 USD for two people.

The Canadian also offers a few “Prestige” cabins that include a full-size double bed, a private washroom with a shower, and other high-end benefits. Fares—never discounted, says VIA Rail—are currently around at $7,440, on a par with some private luxury train journeys.

Europe’s premier two-night trip is currently the 39-hour Paris-Moscow Express, operating once a week. Early spring prices for a couple are $2,938 in a deluxe VIP cabin with a private shower, or $1,207 in a four-person first-class sleeper compartment that you can usually limit to two people by paying a supplement. These fares do not include meals, and trips depart Paris on Thursdays and Moscow on Tuesdays. A similar train operates weekly between Nice and Moscow.

If you’re looking for spectacular mountain, river valley, or coastline scenery, this isn’t the trip for you. It’s mainly plains and rolling hills, but you’re unlikely to geto to see this part of the world in any other way. The train journey passes through France, Germany, Poland, Belarus, and Russia (you’ll need appropriate visas for Belarus and Russia) and is operated by Russian Railways.

Although China, like Europe and Japan, is focusing on developing an extensive high-speed network, it’s big enough that overnight travel is still necessary on many travel routes. And among them, the 40-hour trip from Beijing to Lhasa, Tibet, is the most outstanding and is available via China Highlights. It features the highest railway in the world, reaching an altitude of 16,640 feet, and ending at 11,950 feet at Lhasa. Needless to say, the train passes through some unique scenery. The train is equipped to provide oxygen to passengers, which many will need at that elevation. So, if you have a problem with high altitudes, this train journey might not be for you.

The two-night trip runs daily from Beijing; through trips from other main Chinese cities run to Lhasa less frequently. The best accommodations are in a four-person cabin “soft” sleeper, which costs $195 per person. Fares do not include meals, but the train carries a dining car. This is far from a “luxury” trip even by regular-rail standards, but its unique route makes it worthwhile.

A long-haul train of superlatives, the pricey trans-Siberian is the world’s longest and most varied single-train rail journey: It crosses almost all of Russia, passing mountains, rivers, the world’s deepest lake, and just about any other kind of scenery you can imagine. To do it in luxury, the Golden Eagle makes its 15-day trip four times each way in 2018, with opulent private rooms, high-end dining, and extended stops and excursions along the way—starting at $31,000 per couple.

For something more economical, the Russian Railway Rossiya train journey takes six nights, with a few short stops to stretch your legs. For a land cruise, you’ll want the top accommodation, a two-berth compartment, for which the Russian Railway website currently posts $767 per person, or $1,534 per couple (for travel in mid-March).

Australia’s long-haul rail system is something of an outlier: Trains operated by a private company, Great Southern Rail, are the only passenger services on three main long-haul routes, including the country’s two longest. The Indian Pacific operates weekly three-night trips each way between Sydney and Perth, and the Ghan operates two weekly two-night trips each way between Adelaide and Darwin. A third trip, the Overland, is a day trip between Adelaide and Melbourne.

The Indian Pacific crosses mountains and deserts, with several off-train excursion stops along the way: at Broken Hill, Adelaide city, and Nullarbor. It’s the only long-haul rail trip to cross an entire continent completely, shore-to-shore. It also traverses the world’s longest stretch of absolutely straight rail line—some 297 miles across the Nullarbor (“no trees”) Plain.

11 Things You Should Never Do in Australia

For your land cruise, you will want to travel in Platinum service, with large cabins that feature either a double bed or twins (not bunks), private toilet and shower facilities, in-cabin breakfast, an exclusive dining car, plus a bunch of other special services. The price for travel in mid-April is $3,400 per person ($6,800 for a couple) including all meals. Twin cabins in the less-opulent Gold Class provide upper and lower beds and a private shower and toilet (in a smaller space than Platinum) with an exclusive dining car. The fare for travel in mid-April is $2,342 per person, including all meals and beverages. The Ghan offers a similar service, with an extended excursion stop in Alice Springs.