Oh, the silly, insulting, and downright rude places you can go! These 10 town names made us snicker like middle schoolers. Here’s a quick look at how Tightwad, Middelfart, and others got their names—and what else there is to do once you’ve snapped your photo beneath the roadside sign.

Chances are you don't know anyone who lives in Tightwad (population: 64), but you could probably name a few cheapskates who should. As the story goes, in the early 1900s the postmaster of this town southeast of Kansas City was cheated in a watermelon deal at the local store. Out of spite, he took advantage of his postmaster privilege and renamed the town Tightwad. The main attraction here is Tightwad Bank, which happens to be FDIC insured and classified as "well capitalized." Proof that these 64 Tightwaders are still penny-pinchers?

If You Go: Stop in at the bank or go online to buy a Tightwad Bank hat, shirt, or coffee mug. Nearby Truman Lake is known for boating, fishing, and swimming.

Chances are you don't know anyone who lives in Tightwad (population: 64), but you could probably name a few cheapskates who should. As the story goes, in the early 1900s the postmaster of this town southeast of Kansas City was cheated in a watermelon deal at the local store. Out of spite, he took advantage of his postmaster privilege and renamed the town Tightwad. The main attraction here is Tightwad Bank, which happens to be FDIC insured and classified as "well capitalized." Proof that these 64 Tightwaders are still penny-pinchers?

If You Go: Stop in at the bank or go online to buy a Tightwad Bank hat, shirt, or coffee mug. Nearby Truman Lake is known for boating, fishing, and swimming.

When you live in a desolate unincorporated community between No Name Canyon and No Name Creek, apparently you accept your destiny of sharing the same name—or lack thereof. No Name, near Glenwood Springs, got its name after Interstate 70 was built. A Department of Transportation official noticed that the area didn't have a name and wrote "No Name" for Exit 119, the ramp accessing the community. It drew some attention for its absurdity, locals started to accept it, and it stuck. Later, when given the opportunity to change No Name to a proper name, the community chose to remain nameless.

If You Go: Go rock climbing in No Name Canyon or soak in the nearby Glenwood Hot Springs; at more than two blocks long, it's one of the world's largest.

If you haven't already been to Hell and back, head for West Bay on Grand Cayman Island. You can take a picture with the devil-disguised owner of Hell's souvenir shop and send a wish-you-were-here postcard from Hell to family and friends. Don't miss seeing the jagged black limestone formations that earned this tourist village its name. Most accounts recall someone saying, "This is what hell must look like." Luckily, this one is in a tropical paradise.

One of the country's best forks in the road has to be in southwest New Mexico, where your choices are either Elephant Butte or Truth or Consequences. Tough call. Do you head for a herd of escaped circus performers, or do you take the double dare? Actually, the name Elephant Butte refers to a volcanic cone island (loosely resembling the animal's silhouette) in the middle of a reservoir that is the largest lake in the state and a favorite vacation spot.

If You Go: Fish for record-breaking bass, crappie, or bluegill in Elephant Butte Lake. Boating and watersports are also popular in the state park of the same name. Discover area history along the Geronimo Trail Scenic Byway. Soak in the hot springs in Sierra County's Truth or Consequences.

So many ptarmigans populated the area in the late 1800s that this little community of miners wanted to name the town after the bird. The only problem was that nobody could agree on the correct spelling. To avoid embarrassment and ridicule, they decided on "Chicken."

Fortunately, finding gold came easier than spelling. Chicken, 279 miles east of Fairbanks, is one of the few remaining gold-rush towns in Alaska. There's no electricity (only generators), central plumbing (just an outhouse), or phone service in this town whose population fluctuates between 17 and 37.

If You Go: There are still active gold mines nearby, and you'll likely find gold seekers and geologists at the bar in downtown Chicken. Stop in at the gift shop and the cafe known for its cinnamon rolls.

After downing the Leg O' Mutton, it looks like you'll make it three fourths of a mile before you'll need to hit a toilet. Hopefully, you've got both mint sauce and granny's Imodium in the glove box. The consensus in the small country village of Crapstone is that there's no vile history behind the name's origin. Crapstonites speculate it has something to do with rocks or the soil. Still, when ordering things by phone, these residents on the southeastern edge of Dartmoor have to answer the inevitable address question: "Yes, that's right, c-r-a-p, as in crap."

If You Go: Check out Dartmoor's archaeological remains and ancient villages. See the Dartmoor ponies on the moor or explore the filming locations of the Oscar-nominated War Horse, originally a novel written by Devon-based author Michael Morpurgo.

Countless origin theories abound, but this Ohio River town's name is said to have originated when the flood of 1847 swept away most everything but the general store and the prolific rabbit population. (Insert your multiplying-like-rabbits joke here.) Driven to higher ground, the cottontails ended up becoming a staple ingredient in hash. It must've been about as appetizing as it sounds: There aren't any restaurants in Rabbit Hash serving the dish.

If You Go: After a Cincinnati Reds game, take a riverboat cruise to Rabbit Hash from Covington, which is directly across the river from Cincinnati. Pick up postcards, pottery, or a namesake T-shirt at the original Rabbit Hash General Store. You can also spend an afternoon at the historical MainStrasse Village in Covington or in Newport on the Levee, located right on the Ohio River.

Yes, there's lots of cheese cutting in this Funen Island town where one of Denmark's largest dairies is based. But the name Middelfart (website in Danish only) actually means "central passage," referring to a ferry link that used to connect the island with the Jutland peninsula. Whale hunting was big business in the strait until the late 1800s; now it's sailing and whale watching. Charters and yachting Middelfarters happily harness the abundant breaking wind.

If You Go: Take a whale-watching cruise on a sailboat. The South Funen Archipelago is a popular place for yachting, and small ferries connect many of the islands with the mainland. Visit author Hans Christian Andersen's house stationed along the narrow cobblestoned streets in Odense, Funen's largest city.

Historians figure the name of this town, which sits 35 miles east of Eugene, is a nod to the biblical character Nimrod, who was a mighty hunter, and the excellent trout fishing here on the McKenzie River. Somehow, though, when you pose for a photo beneath the Nimrod sign, you look more silly than mighty. Forget trying to steal the popular icon, though. Apparently enough Nimrodians and visitors have succeeded that it is now bolted down.

If You Go: Just for laughs, hike the one-mile Hehe Trail in Oregon's Willamette National Forest, a 110-mile stretch of woodland along the western slopes of the Cascade Mountains. It climbs up to the ridgeline and offers great views over the valley. Go rafting on the Upper McKenzie River or fishing near McKenzie Bridge.

Where's Mary Poppins when you need her? Pronouncing "Supercalifragilisticexpialidocious" is a cinch compared to this 58-letter Anglesey island village name. Thankfully, there's an iTunes song for that. Since you must know, the name translates to "St. Mary's Church in the Hollow of the White Hazel Near to the Rapid Whirlpool of Llantysilio of the Red Cave." But it's not authentic Welsh. The name was an 1860s publicity stunt created so the local railway station would have the claim to fame of longest name in Britain.

If You Go: Head to the namesake church for a photo next to the railway-station sign. For great views over the island and Menai Strait, climb the 115 steps to the top of the Marquess of Anglesey's Column.

You Might Also Like:
Click on the image below to see our Uncensored: World's Dirtiest Town Names slideshow. Warning: The following contains content that is appropriate for an adult audience onlyâthat is, an adult audience with a sophomoric sense of humor. 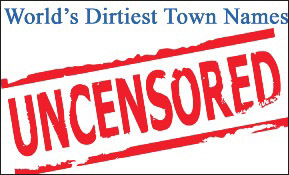