A city people want to live in is a city people love to visit. Copenhagen is just that. Crowned (again) as the most livable city in the world by Monocle magazine, the Danish capital has garnered points for its smart urban design, stellar public transportation, and unfettered access to nature (thanks to its swimmable harbor and extensive park system). But this year, the city has an added edge: the designation of European Green Capital.

As it pioneers the ultimate sustainable lifestyle, Copenhagen is sharing its ideas and solutions with the rest of the world through special eco-themed events in 2014. And while the idea of being green can sometimes seem more prosaic than cool, in Copenhagen, it comes equipped with the rocket boosters of pleasure (sustainably powered, of course).

Where else can you pedal through the city on a GPS-decked electric bicycle, dine alfresco at an organic hot dog cart, and even twirl high above the city at a wind-powered amusement park? All eyes are on Copenhagen this year, so now is the time to see just how this once-Viking village has evolved into one of the most progressive capitals ever. 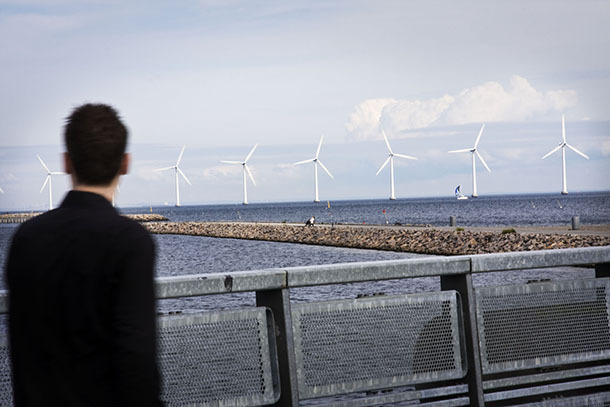 In Copenhagen, climate change matters … a lot. And the city’s dedication to reversing the trend is sure to leave an impression, as sustainability is infused into everything you encounter in town: the architecture, food, activities, and modes of transportation. Here, the bike culture is so pervasive that the city’s concept of urban planning—specifically designed to encourage cycling—is referred to around the world as “Copenhagenization.”

Copenhagen’s supreme penchant for all things eco has led to its role model status, and the European Commission has noticed, awarding it the Green Capital title for 2014 (other recent winners include Nantes, France, and Vitoria-Gasteiz, Spain).

During the celebration year, the city gets to show off its progressive edge, but it has also pledged to share its passion and innovations with locals and visitors alike through its Sharing Copenhagen theme, which is divided into five parts: The Good City Life of the Future, Resources and Sustainable Lifestyle, The Blue and Green City, Green Mobility, and Climate and Green Transformation. Each segment runs for several months and includes free tours and events (300 in total), from urban-farming workshops to guided tours of new sustainable neighborhoods. (Follow #sharingCPH on Instagram.)

For example, the open-air photo exhibition “Copenhagen Green” tells the story of the city’s 100 green spaces in picture form; choose your favorites then explore the actual sites on your own. A harbor tour offered by the Danish Architecture Centre will take you on an informative journey to Nordhavn, a new city area, in an electric boat. And in August, Copenhagen Cooking will feature more than 100 food events, with an entire evening dedicated to sea buckthorn, the new Nordic super fruit.

Copenhagen might have the limelight in 2014, but its commitment to sustainability will continue long after the celebrations are over. Taking on the ambitious goal of becoming the first carbon-neutral capital by 2025, the city has a bit more work planned, including retrofitting old buildings in sustainable ways, getting more organic food into public kitchens, converting the city’s power plants to biomass, and installing new onshore wind turbines.

And although green heating systems and progressive waste management won’t entice most people to visit, the city’s efforts will not only inspire other destinations to upgrade but will also be a boon to tourists who come to enjoy the spoils associated with the Copenhagen lifestyle. 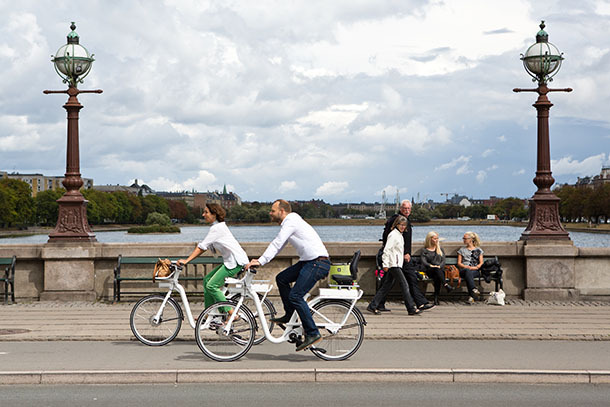 If you want to experience Copenhagen like a local, get a bike, pronto. Propelling yourself on two pedals is standard here, as bicycles don’t emit CO2, and it’s the most efficient way to get around the compact city. Beyond that, biking is simply part of the culture. Currently, 36 percent of Copenhageners cycle to work or school, and by 2015, the city aims to reach 50 percent by widening bike lanes and building bicycle superhighways.

Stand at any crosswalk and you’re sure to feel the whoosh of peddlers flying past in “Copenhagen lanes” (bike lanes with protective raised curbs on either side). And with so many options—free coin-deposit bikes, rickshaw-like bicycle taxis, Christiania cargo bikes, etc.—there’s no reason not to join them. Choose the new edition Copenhagen City Bycyklen, fitted with touch-screen tablets and built-in GPS, and you can tour the city almost effortlessly. The continuous low-grade pulse of electricity gives the bike a boost, so you can focus on seeing the city (and navigating with your touch screen) rather than getting a major workout.

And for when you really can’t bike, take the bus: The CityCirkel buses (Bus 11) run on rechargeable batteries. 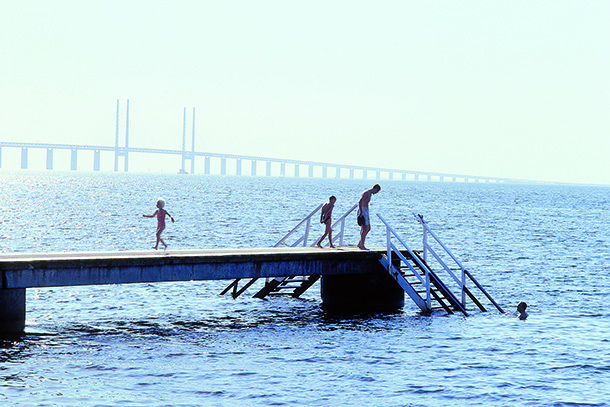 Step—or shimmy—aside, Little Mermaid statue. With water so clean you can swim—and farm shellfish—in it, the harbor itself is becoming Copenhagen’s main portside attraction. Virtually unpolluted and bustling with new development, Copenhagen Harbour is rapidly transforming from industrial port to major recreation area. So you can fearlessly take the plunge at one of four public bathing areas, such as the popular Islands Brygge pools or the new architect-designed harbor bath Sluseholmen, which opened in 2012.

If the thought of diving safely into city water isn’t shocking enough, consider dining on harbor-raised mussels or oysters at one of Copenhagen’s top restaurants. Through the city’s Harbour Farm project, experiments with aquaculture aim to take shellfish from dockside to plate in a matter of minutes.

The revitalized harbor is also the locus of some of Copenhagen’s most exemplary sustainable architecture and urban-planning projects. For example, the new platinum LEED-certified UN City complex (free tours are available) is outfitted with solar panels and a seawater-cooling system, and the new city district Nordhavn (North Harbor) is the largest city-development area in Northern Europe, setting the standard for sustainable living, working, and playing. 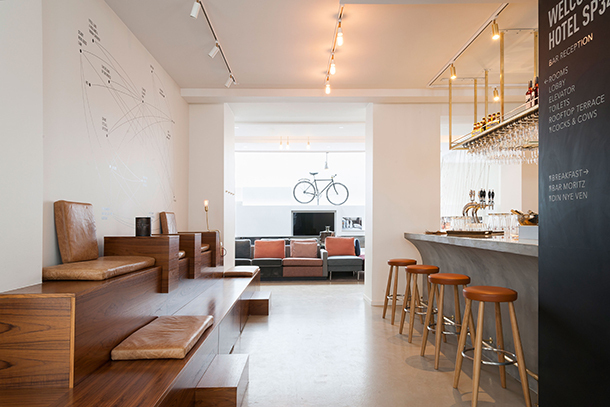 Sustainable architecture also makes an appearance in Copenhagen’s hotels. In 2013, 71 percent of all hotel rooms citywide were eco-certified, with Crowne Plaza Copenhagen Towers getting the top honor as Denmark’s greenest hotel. However, the luxe property’s crown might be challenged as new contenders come to town.

In April, Hotel SP34 opened its doors on Sankt Peders Stræde. The brand-new four-star boutique property by Brøchner Hotels, which is the world’s first carbon-neutral hotel chain, respects the architecture of the three classic town houses it’s comprised of and blends seamlessly into the surrounding bohemian neighborhood. Minimalistic but warm, rooms invite in muted claylike tones brightened by tall arched windows and exposed filament lightbulbs. Several on-site restaurants offer comfort foods such as burgers and Spanish tapas, and an organic breakfast buffet is served every morning. Downstairs, the lobby offers comfortable nooks for gathering, reading, using the free Wi-Fi, and relaxing by the fireplace. Weary travelers take note: The reception desk doubles as a bar.

You can pore over the Commandment-like New Nordic Kitchen Manifesto or simply go to Copenhagen and dig in to the food. The city holds the world record when it comes to organic food products, and “locally sourced” and “nose to tail” are common buzz phrases at nearly every restaurant, from hyper-local trailblazer Noma (plus others on the scene such as Geranium, Relae, Radio, and Amass) to an unassuming organic hot dog stand (actually, there are two, DØP and Pølse Kompagniet).

At Rub&Stub (a name derived from the phrase “lock, stock, and barrel”), local “foraging” is taken to a whole new level. Opened in summer 2013, the nonprofit’s battle cry is to tackle the city’s food-waste problem (Denmark as a whole is rated as one of the worst offenders in the world) by using surplus foods—including unsold bread from bakeries, crooked carrots from farms, and excess (but fresh) seafood that can’t be frozen in time for sale—in its kitchen.

Urban farming has also taken hold, and Byhøst has recently launched a city-harvest app to help people more successfully eat their way through Copenhagen (and beyond). Visitors looking for a one-stop shop for Danish food—including artisan cheeses, charcuterie, seafood, beer, breads, and chocolates—need look no further than Torvehallerne, the city’s new food hall and one of its trendiest culinary hot spots.

Need more reasons to explore the Copenhagen lifestyle? The GoGreen smartphone app leads (or is it LEEDs?) the way to the city’s sustainable restaurants and hotels, plus cycling routes, green spaces, and other eco-themed activities.

If you have a question for Anne about her trip to the Copenhagen or want to share your own Copenhagen experience, leave a comment below! You can also follow Anne on Google+.