Vienna might be a musical city, but if you love food as much as I do, Franz von Suppé’s famous overture Morning, Noon, and Night in Vienna easily translates into a more culinary-themed “breakfast, lunch, and dinner.” Yet, in a place that boasts some of the most well-known pastries in the world, the best interludes are the sweet ones between meals. And while the ever-popular Sachertorte awaits, a few surprises add new notes to Vienna’s seemingly endless libretto of standout confections.

In Austria’s capital, cake (and coffee) is simply part of life. More than 800 coffeehouses line the city’s romantic cobbled streets and public squares, attracting locals and visitors en masse. And while a regular cafe offers a more grab-and-go experience, the kaffeehaus imbues a particular culture (recently recognized by UNESCO) that invites you to linger with a cream-infused espresso, pore over a newspaper, relax to the sounds of a grand piano, and, of course, sink a fork into a luscious torte. 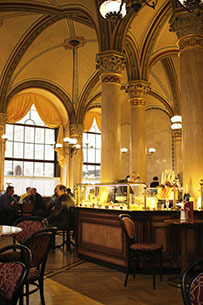 Of the many coffeehouses in town, Cafe Central takes the cake as one of the most classic. First opened in 1876, the elegant, cathedral-like hall inside the Ferstel Palace was recently renovated but still maintains its vintage-Vienna vibe. Red Thonet chairs make the vast space feel more like an intimate salon than a bustling dining room, and polished parquet floors intensify the warm glow from chandeliers above.

While late 19th-century thinkers like Freud and Trotsky confabbed here, the only thing you have to contemplate is which dessert—made at the cafe’s in-house pastry kitchen—to pair with your Viennese roast. My choice: the signature Cafe Central Cake, with layers of chocolate, orange, and marzipan, all soaked to the crumb with intoxicating rum.

Similar to a coffeehouse but a bit more bakery than cafe, the konditorei is Austria’s answer to the French patisserie. Demel, Vienna’s Imperial and Royal Court bakery, started selling frozen treats in 1786 and has come to define the canon of fine Austro-Hungarian desserts. And although it’s one of the oldest pastry shops in town, time hasn’t taken a toll on Demel’s obsession with quality.

Head chef Dietmar Muthenthaler ensures that all the sweets are handmade with natural ingredients from Austria. Apfelstrudel is prepped throughout the day—three at a time on a cloth-covered bench—so that it’s always served fresh from the oven. You can watch Muthenthaler and his team making the apple-stuffed pastry, as well as cakes and tea biscuits, from small marble-topped tables at the back of Demel’s rococo-style cafe—that is, if you can make it past the elaborate displays of alcohol-spiked russische-punschtorte; marmorgugelhupf, a type of coffee cake; and the widely sought-after Sachertorte, a chocolate sponge cake coated in apricot jam and chocolate icing. 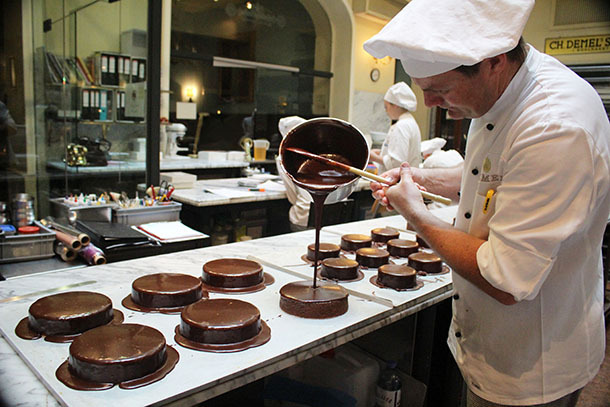 Enrobed in as much controversy as chocolate, the Sachertorte is the most famous cake in Vienna and likely the world. And although it’s a staple at Demel (as well as other bakeries and cafes in town), the title of “Original Sacher-Torte” was awarded to Hotel Sacher in the ’60s after a contentious legal battle. As the story goes, Franz Sacher created the cake in 1832, and his son Eduard perfected it while working at Demel, later bringing it to the hotel, which he opened in 1876.

The two businesses claimed the original recipe (Demel’s one-layer version versus Hotel Sacher’s two), and an intense cake drama ensued. As a result of great marketing, most visitors to Vienna make a mad dash to Hotel Sacher’s luxe cafe and dining room, but consider trying both shops’ variations and determining your own favorite. Only then will you be able to have your cake and eat your other cake, too.

(Can’t make it to Vienna? Then bake the Sachertorte at home. While Hotel Sacher won’t reveal all its secrets, it has published a recipe for the cake, which I’ve adapted.)

Like the Sachertorte, the apple strudel is an Austrian tradition that finds its way onto nearly every bakery shelf in town. If you’ve ever yearned to create it yourself, the chefs at Cafe Residenz in Schönbrunn Palace will teach you how (in German and English) during an hourly Apfelstrudel Show. If baking isn’t your thing, you’ll still get the chance to taste the flakey, just-sweet-enough pastry as you watch it being kneaded and stretched until it’s so thin you can read a newspaper through it.

The entertaining bakers pile the dough with tart apples and a mixture of breadcrumbs, cinnamon, sugar, and raisins, roll it, and then brush it with melted butter and then more melted butter.

Traditional Viennese desserts, in all their glory, will always draw people to Vienna. However, just as newspapers have largely given way to tablets and free Wi-Fi in coffeehouses, the pastries are evolving, too. And while classic atmosphere and tradition make up one window into the world of Viennese sweets, another is emerging: One that combines sustainability, health consciousness, and hyper attention to choice ingredients.

Adelheid Horvath brings a love of the earth to time-honored Austrian cookies. Although many chefs use natural ingredients, her attention to detail takes things a step further. Biodynamic spelt flour, eggs from heirloom chickens, raw-milk butter, and salt extracted from a local salt mine make up the ingredients list at her confection company, Adelheid. She believes it’s important to be conscious about what we eat, even when it comes to sweets. Horvath, who trained at Demel more than 30 years ago, started her company in Vienna’s 6th district in 2010 and has since won a citywide contest for the best vanillekipferl (vanilla crescent), a melt-away mix of flour, butter, nuts, and powdered sugar. Currently, she is looking for a storefront in the city center, but she sells boxes of cookies from her workshop. 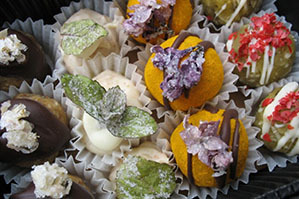 For the past seven years, Michael Diewald of Blühendes Konfekt has been incorporating locally sourced flowers and herbs (as well as unusual fruits) into his chocolate confections. His goal is to explore the “unknown fields of taste” by inventing unique flavor combinations. Gilded with edible flowers, signature bonbons come in flavors such as rose, violet, lilac, citrus blossom, and rose-geranium, but the offerings on any given day change with the seasons.

With a strong focus on health consciousness, more and more Viennese chefs are also paying attention to dietary needs and preferences such as gluten-free, lactose-free, and vegan. As people take more responsibility for their eating habits, Vienna’s raw-food scene, in particular, has seen a boost with two new pastry shops.

Simply Raw Bakery, led by mother-daughter team Gabriele and Shanna Danek, sells cakes and pastries that are made without processed sugar and flour. Believing that foods should nourish and energize the body, the Daneks use nuts, fruits, coconut, and cocoa as some of their main ingredients, and nothing is ever heated above 108°F to preserve nutrients and enzymes. Gabriele and Shanna started selling their raw sweets at an organic farmers’ market in 2012 and just opened a storefront in Vienna’s city center in April. Look for gourmet cupcakes in favors like chocolate-matcha and banana-pecan. I found the apfelstreuselkuchen, pistachio nougatine, and “Dutchess of Raw” torte (made with poppy seed and lemon) to be particularly tantalizing.

In the 6th district, Raw Shop invites visitors into its playfully natural world of raw sweets. Just step on the grass welcome mat and walk through the pale yellow door into a delightful playground of cupcakes, walnut tarts, and honigkuchen, a type of honey cake. And if you’re one to honor the classics, don’t rule out raw. The shop makes a version of the Sachertorte with dates, nuts, coconut oil, cacao, and natural apricot filling.

Like a great concerto, Vienna’s timeless pastries will endure, while new approaches offer reasons to return again and again. Whether you come to savor a rich torte (or two) at a traditional coffeehouse or konditorei or are looking for a unique twist, there will be something sweet waiting for you morning, noon, and night.

Have a question for Anne about her trip to the Vienna? Want to share your own Vienna experience? Leave a comment below! You can also follow Anne on Google+.

Read the original story: Vienna’s Best Cookies, Made with Heart and Soul by Anne Banas, who is a regular contributor to SmarterTravel.