From arts, architecture, and parks to dining and nightlife, New York attractions set the standard in all categories. This limitless blur of activity can be overwhelming, especially for first-timers. When deciding which places to visit in New York, plan to tackle one must-see sight per day; then save time for wandering the city’s diverse and unique neighborhoods. For as every local and frequent visitor knows, the easiest way to slip into the dream state known as a “New York state of mind” is simply by walking one densely fascinating block after another.

The Best Places to Visit in New York City

Here’s your guide to the most essential places to visit in New York City. Note that you can save money by purchasing a CityPASS, which offers discounted admission at select New York attractions—including many of the ones below.

Ellis Island and Statue of Liberty 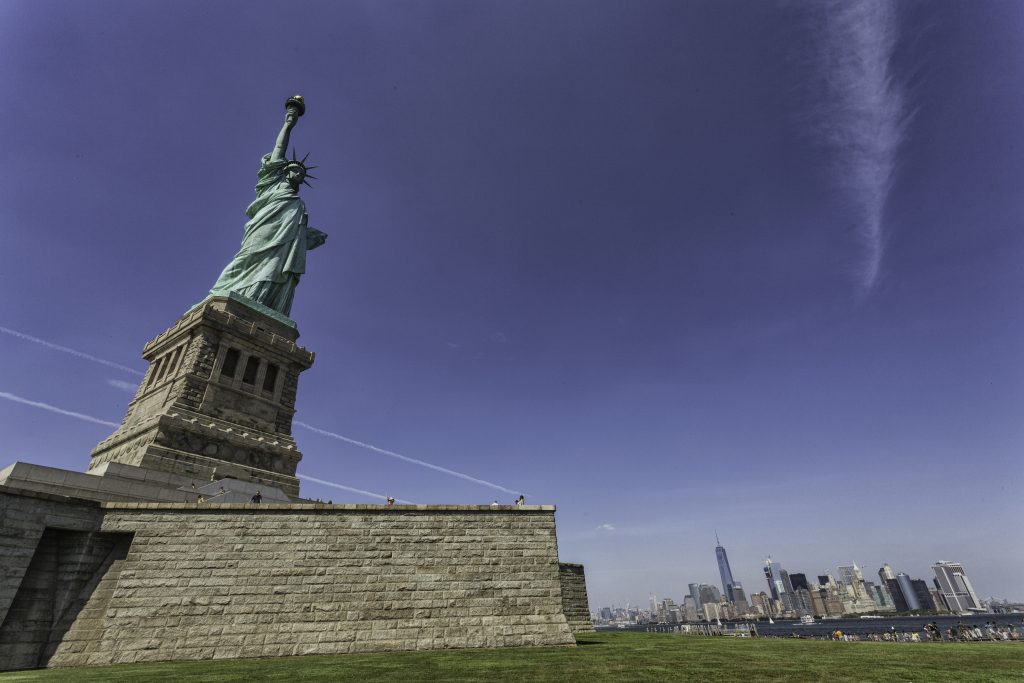 In a city chock-full of iconic sights, no place symbolizes the spirit of the great melting pot like Ellis Island. Between 1892 and 1954, the isle located off the southern tip of Manhattan in New York Harbor served as the gateway to America for more than 12 million immigrants hoping to begin life anew. Through passenger records, arrival interviews, and exhibits displaying clothing and baggage, visitors gain a deeply personal perspective on those who entered the Great Hall and the hardships they faced.

Immerse in the experience with a 45-minute audio tour, available in nine languages (there’s also an engaging version for kids). Combo tickets are the best deal and include the round-trip ferry ride to Ellis Island and the Statue of Liberty, along with admission and an audio tour of the Ellis Island Immigrant Museum. Tickets to the base and crown of Lady Liberty can be reserved separately; keep in mind that a trip to the top involves more than 400 steps.

With cameo roles in more than 350 films, America’s first public park is embedded in our collective consciousness, yet experiencing Central Park in person is always awe-inspiring. These 843 acres of serene green represent one of the most relaxing places to visit in New York City.

Visit the Great Lawn or Sheep Meadow to see New Yorkers at play, throwing frisbees and soaking up the sun. Rent a bike or go for a run on miles of mixed-terrain trails incorporating hills, flats, and a motivating buzz of activity. Rent a paddleboat at Loeb Boathouse or go fishing in Harlem Meer. In winter, take to the ice at Woolman Rink.

For a window into the daily life of New Yorkers, there’s no better vantage point than the longest waterfront park in the U.S. This 550-acre riverside park, anchored by a series of historic piers, serves as a communal backyard and recreation spot.

The bounty of active and leisure pursuits is as diverse as the city’s population. Golfers take swings at Chelsea Piers’ driving range with a view. Water lovers paddle, kayak, and sail from multiple pier-side outfitters. Circus-wannabes learn to fly at the Trapeze School of New York. Cyclists soak up river views along four miles of bikeway (and beyond, via a connector to Riverside Park on the northern end). And, of course, you can simply sit on a park bench or lie in the grass to watch the city in perpetual motion.

A scenic stretch of 5th Avenue, from 82nd Street to 105th Street along Central Park, packs in more artistic treasures than any other mile in America (and possibly the world). Whether your taste is contemporary or classic, history or design-inclined, this is one of the essential places to visit in New York City.

Don’t overlook smaller institutions like the Jewish Museum, the oldest museum in the world dedicated to Jewish art and culture; El Museo del Barrio spotlighting Puerto Rican, Caribbean, and Latin American art; and Cooper Hewitt National Museum of Design for all things design-centric. Learn more about the story of NYC with a visit to the Museum of the City of New York.

Empire State Building or Top of the Rock 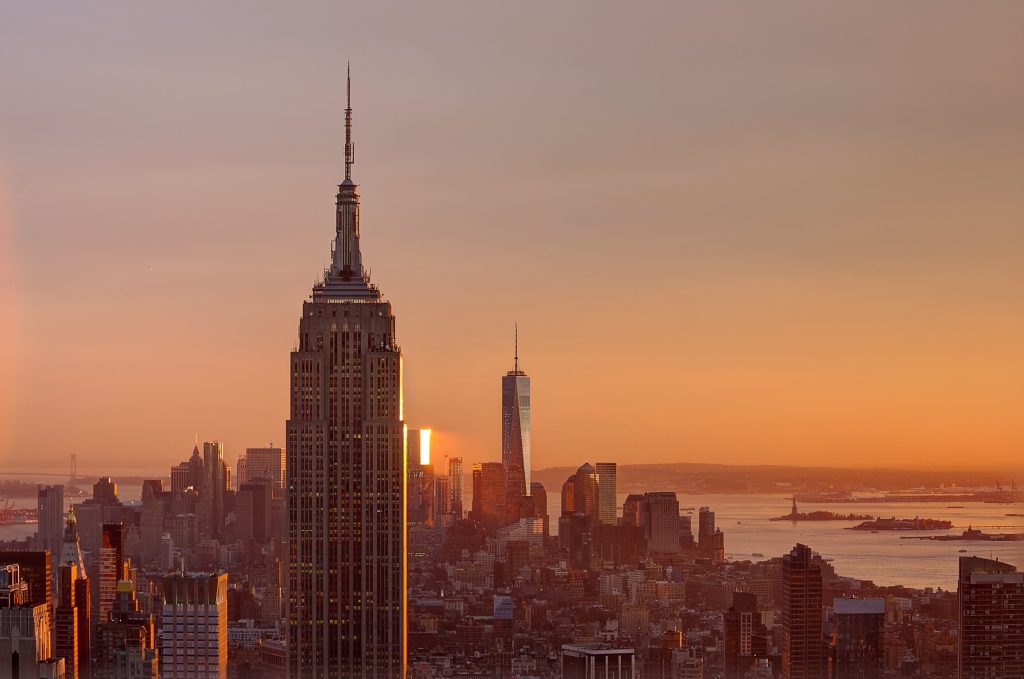 Two iconic New York attractions provide bird’s-eye views of the city’s glittering skyline and dense urban tangle. Queues can be long to visit the Empire State Building, so snag a VIP Express Pass to fast-track up to the 86th- and 102th-floor observation decks. Don’t miss the magnificent art deco architecture in addition to the stunning views. For an over-the-top New York sightseeing experience, reserve a sunrise ticket (just 100 passes are granted each day).

Another art deco masterpiece, Rockefeller Center opened in 1933 with the aim of being a city within a city. That mission is intact today, as the space is home to NBC TV studios, acclaimed restaurants, a seasonal ice-skating rink, and a world-famous Christmas tree. From Top of the Rock’s three viewing platforms, including an open-air 70-floor observation deck, the Big Apple skyline shines. Epic views of Empire State Building, Chrysler Building, and Central Park make the short wait for timed admission tickets worth every minute.

Freedom Tower, aka One World Trade Center, soars skyward where the Twin Towers once stood, defining Lower Manhattan in view and spirit. A visit to the site’s 9/11 Memorial & Museum provides insight into the tragedy while honoring the sacrifice of nearly 3,000 people, including first responders, killed in terrorist attacks on September 11, 2001, and February 26, 1993.

Plan your time so there’s no need to rush through the gardens. In the footprint of the original twin towers, two beautifully designed reflecting pools feature the names of those lost and provide a serene setting for quiet contemplation following the emotional exhibits. 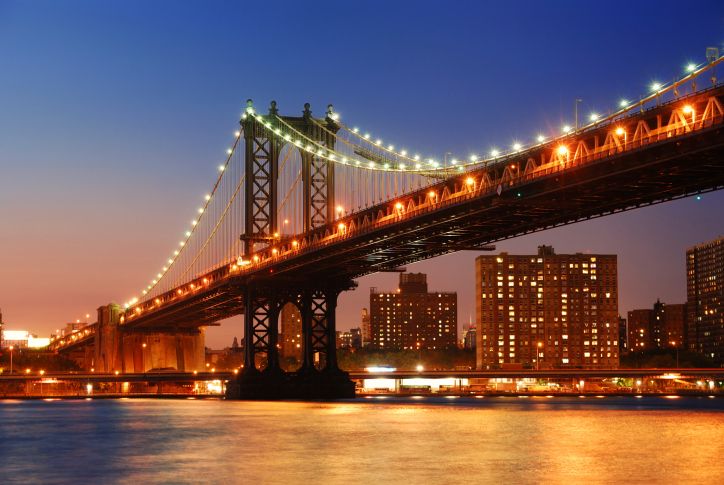 For a quintessential New York experience, join the flow of traffic gliding along the elevated pedestrian walkway on one of the world’s most celebrated bridges. Since 1883, the steel suspension bridge—an engineering marvel—has soared above the East River, connecting lower Manhattan and Brooklyn. Every day, a blur of cars, bicycles, and feet traverse the 6,000-foot span while taking in unrivaled views of the city as well as Lady Liberty.

Sunrise and sunset are magic, but there’s never a wrong time to pedal a Citi Bike or walk 2.6 miles across and back. Indulge in a delicious pit stop on Old Fulton Street, under the bridge, at Juliana’s Pizza—often heralded as the best pizza in America.

Moving from one New York neighborhood to another sometimes feels like entering a new country, and entering lively Chinatown is a good example. At street level, underneath shop signs illuminated with Chinese characters, fish and vegetable markets spill onto sidewalks and exclusive sunglass and jewelry shops share walls with trinket stalls and dim sum parlors.

In 1904, fueled by advertising genius and electrical currents, the first lighted billboard went live and the phenomenon known as Times Square launched. More than a century later, the lights and action are even brighter. The very mention of this neon neighborhood causes many a New Yorker’s eyes to roll, but every first-time visitor should see Times Square—especially at night (with the caveat that you should also venture well beyond this tourist mecca). Watch the show unfold from an elevated seat on the red steps near Duffy Square.

New York’s wackiest and most wonderful characters enter the stage as costumed superheroes such as Batman and Lady of Liberty. When snapping Instagram-worthy shots with your favorites, be sure to offer a tip.

Skip the plethora of chain eats and try local favorites like coal-oven pizza at John’s or brisket sandwiches in the historic bar of Joe Allen Restaurant. Experience a rarity in today’s Times Square, an old-school dive bar with cheap drinks and a good jukebox, at Jimmy’s Corner.

The heart of New York City’s Theater District runs along a historic stretch of Broadway that became one of the first electrically lighted streets in the U.S., earning it the moniker “the Great White Way.” No visit to the city feels complete without experiencing at least one Broadway or off-Broadway show.

For the best deals, plan for Tuesday nights or matinee performances and check out same-day discount ticket offers at one of four TKTS booths around the city. If you have a specific show in mind—hello, Hamilton—check individual theaters’ policies for day-of-show lottery tickets and last-minute rush deals.

Theater lovers should visit during Broadway Week, a biannual event in January and September, when most shows offer two-for-one tickets.

NYC’s evolutionary nature is embodied in this abandoned freight railway line transformed into one of the city’s most beloved parks. Elevated tracks running above West Side streets and alongside industrial and residential buildings now serve as a dramatic setting for self-seeded gardens and lush landscaping. Works of art including site-specific sculptures, benches made of repurposed materials, and eye-popping murals that add visual interest along every stretch of the nearly 1.5-mile expanse.

The balance of natural beauty and urban grit is in perfect harmony, and views of the Hudson River are hard to beat. Take a seat in the amphitheater space at 10th Avenue to breathe in the city’s rhythm and color. While you’re here, don’t miss other prime places to visit in New York, including Chelsea Market and the Whitney Museum of American Art.