Sure, fuel costs, maintenance, layovers, and employee wages can drive up the price of an international flight. But the surprising cost center behind those exorbitant fares is actually … government taxes? It’s true, especially on shorter international routes, which have the same taxes tacked on as longer routes.

This analysis comes from the consumer value watchdogs at ValuePenguin, which recently conducted a study analyzing airfare taxes on the top 15 overseas destinations for Americans and found that U.S. travelers paid nearly $3.5 billion in taxes to these international hot spots in just one year. Here’s a look at each destination’s airfare tax: 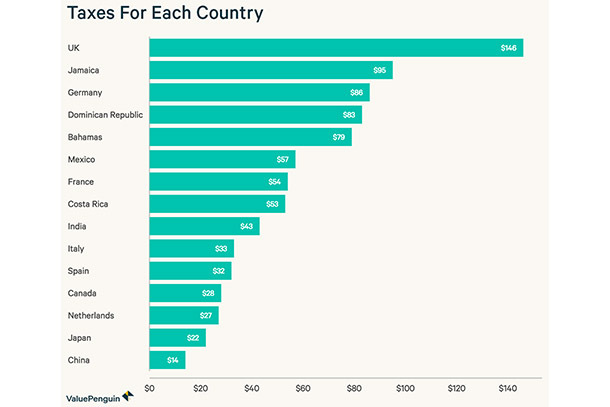 ValuePeguin compared this to a base airfare in each country to find out which countries take the highest percentage of your fare. It’s no surprise that the U.K. has the highest tax after the 2013 increase on its Air Passenger Duty tax. Three Caribbean hot-spots—Bahamas, Jamaica, and the Dominican Republic—also have high taxes, especially since flights are on average pretty short from the U.S., making them almost half the percentage of a base airfare to these countries. Here’s the full breakdown: 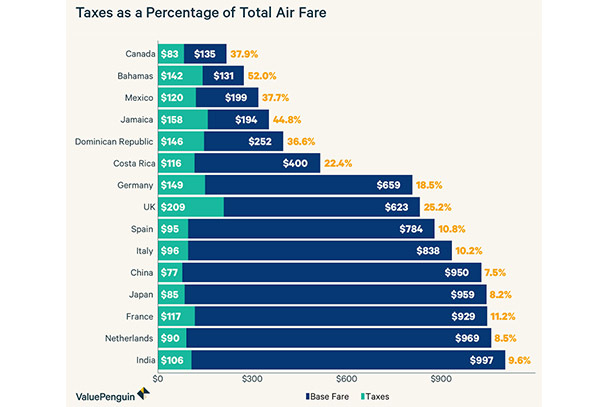 So, how can you avoid taxes like these? Spain, Canada, the Netherlands, Japan, and China go easy on airfare taxes, with taxes only making up around 10 percent of your total airfare to those countries.

You can also avoid high taxes by researching the taxes by airport (smaller airports often have smaller charges); however, this only works with direct flights. Obviously flying budget airlines will also lower your total fare. For example, if you’re feeling extra savvy you can fly direct to Ireland and then fly on a budget airline to London to avoid the $145 tax, since Ireland only charges a $23 tax.

It’s also important to note that international taxes are not covered by miles or rewards. So, while you think you might be getting your “free” flight, you could still be left paying more than $100 to the foreign government of your choice.

Think you can avoid these taxes with stopovers? Think again … stopovers can actually add up pretty quickly. The U.K. charges $80 for a stopover, compared to just $26 in the Netherlands or $34 in Spain. View the full list of taxes charged on a stopover below: 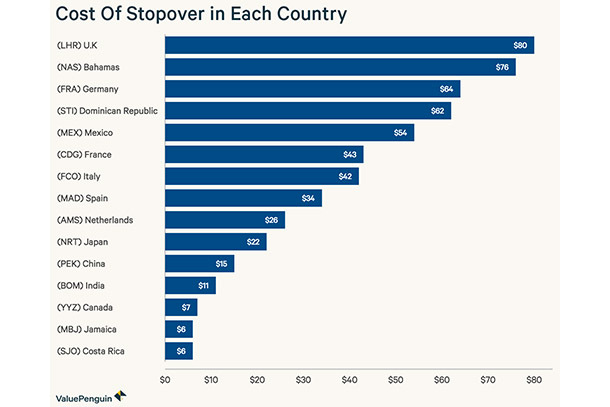