You know going into it that Christmas travel can be exasperating: crowds and winter weather often do not play well together. But some trips are worse than others, so Treetopia dug through Department of Transportation data to identify the best and worst airports, routes, and days for Christmas travel, based on the number and length of delays encountered in last year’s holiday season.

The Best and Worst Days for Holiday Travel 2019 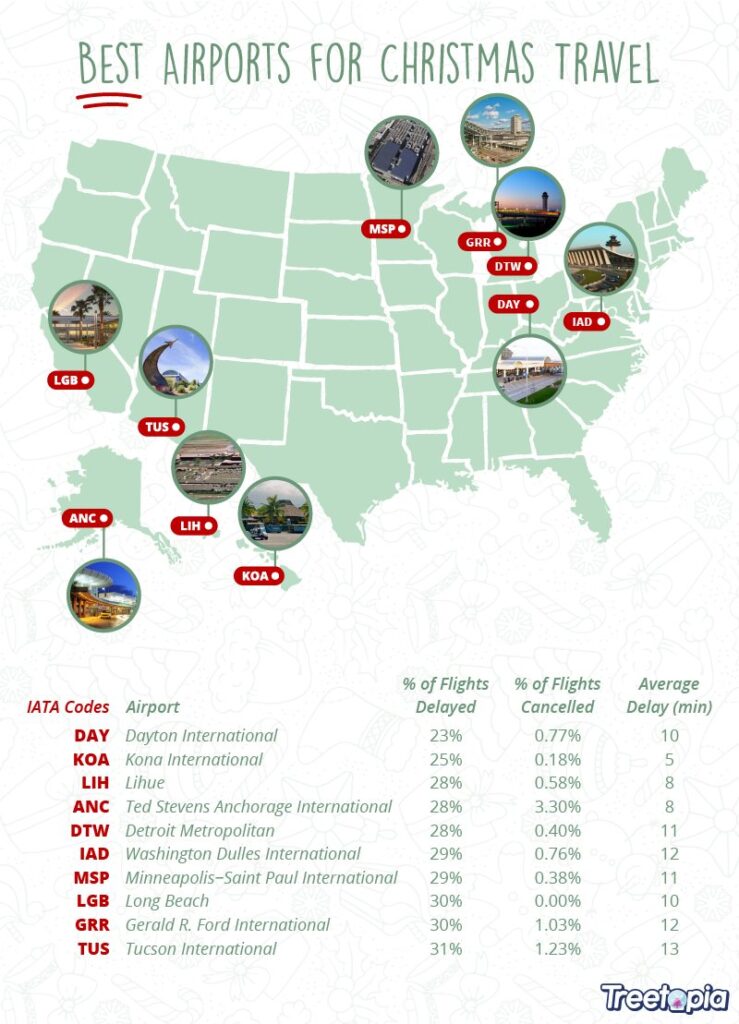 You can probably ignore the two airports in sunny Hawaii, where delays are almost always short and cancellations rare. Otherwise, it’s a mix of location and size that doesn’t show much of a pattern. The top 10 list includes three important connecting hubs—Detroit, Minneapolis/St. Paul, and Washington/Dulles—which makes those who chose one of them to connect, very lucky.

The Worst Airports for Christmas Travel

The 10 worst airports averaged really heavy delays, with just over half of the flights to more than three-quarters of all flights delayed. The delays weren’t trivial, ranging from 13 to 25 minutes. And four of the 10 averaged more than one percent of all flights cancelled.

Best and Worst Days to Travel

No surprises here: Just look at a calendar or our prior story. But basically:

Delta Airlines beat legacy lines United and American, as it seems to do by most measures these days. And American scored well below Delta and United.

Southwest scored the highest percentage of delayed flights, at 64 percent; this jibes with the poor scoring at airports where Southwest is the biggest player.

JetBlue didn’t cancel any flights, but suffered relatively high percentage of delays and long delays. People speculate that JetBlue’s frequent poor scores on delays are due to the fact that its two main bases, Boston and New York/JFK, are notoriously overcrowded and susceptible to winter difficulties.

Treetopia also tabulated the best and worst point-to-point routes, but that information is of little relevance to most travelers. If you want to fly from Dallas to Miami, for example, you probably wouldn’t switch to flying from Detroit to Minneapolis because the delays are fewer and shorter. This tabulation falls into the “possibly interesting but irrelevant” category.

If, as is likely, you’ve already made your Christmas travel flight arrangements, these tabulations probably won’t affect your plans. At best (or worst, depending on your viewpoint), they may make you worry a bit more if you’re heading to/from/through one of the worst airports on one of the worst days.

But if you still haven’t made arrangements, still plan to fly somewhere, and have to make connections, you can expect less misery at Detroit, Minneapolis-St Paul, or Washington/Dulles than at other hubs. And you can try to find flights on the low-traffic days, if your schedule permits.

The main take-away from the “10 worst airports” list is less about airports and more about Southwest. It may be one of the nation’s favorite airlines, but it seems to be more prone to delays than the other big lines.