David Rothblatt and Fia Hargil are lifelong New Yorkers, but they don’t remember much about September 11.

That’s because they were just preschoolers then. Still, what happened that horrible day changed their lives and the lives of many their age.

Today, the two believe that it’s important for those their age and younger to appreciate the gravity of what happened. “Kids need to know, even if it is hard,” Fia said. David agreed. The two attend high school just a few blocks from the site.

“It’s hard for kids to understand … but 9/11 affects all of us, and it is important to know what happened,” David said. “To honor those who risked and gave their lives for strangers … and all of those whose lives were taken for no reason.” He adds that his dad’s best friend was badly injured that day.

The two are among the six members of the inaugural class of teen ambassadors trained to work with children who visit the National September 11 Memorial & Museum, which opened at the new World Trade Center this past May. Since then, nearly 2 million people from 140 nations have visited. (Tip: Purchase tickets online several weeks in advance to get the time slot you want.)

Every Saturday, and more often over the summer and during school break weeks, there are free programs for children as young as six, often led by the teen ambassadors. They may talk about the first responders and make first-responder badges or make a painting of the blue sky. There is a massive artwork titled Trying to Remember the Color of the Sky on that September Morning that is composed of 2,983 squares, each painted a unique shade of blue, to commemorate those killed in the attacks. “You can’t understand the world today without understanding what happened on 9/11,” says Noah Rauch, the museum’s director of education, who oversees the Junior Ambassador Program, which encourages students to help their peers to understand what happened.

“For many young people, 9/11 is primarily another historical event,” said Annalee Tai, 16, another of the teen ambassadors. Thus, it is hard to understand the repercussions of 9/11, how it changed the nature of global interaction and the protocols of national security—a tragedy that, by launching movements in antiterrorism and religious tolerance alike, has truly defined our times.

There is also guidance on teaching children about 9/11 and a special museum guide for visitors with children. Museum officials suggest encouraging kids to closely look at an artifact and then asking them: “What do you notice?”

Answer their questions with basic facts and be specific. The story of 9/11, museum officials stress, is really thousands of individual stories. Avoid stereotypes and share your own feelings honestly. Most important, if you can’t answer a child’s question, be honest and say so—explore the subject together. 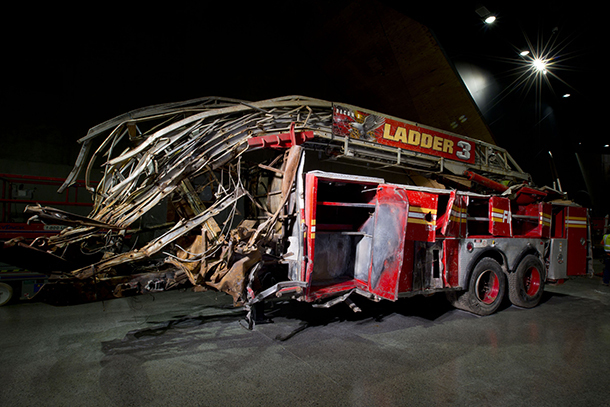 Docents are assigned at major sites to help interpret their meaning—like the Survivors’ Stairs, one of two outdoor flights that served as an escape route for hundreds, or the mangled Ladder Company 3 truck, which sustained some of the heaviest casualties of any fire company that day, losing all of its men. Three hundred forty-three firefighters died on September 11.

This is not an easy museum to visit. “The museum not only houses artifacts, but it is itself an artifact. Its location is authentic because it is the final resting place for thousands of victims,” said Annalee.

Museum officials suggest kids be 11 or older to visit the main historical exhibition, which presents the events of September 11, 2001, including what prompted the attack and what happened in its aftermath.

There are media installations with personal reflections from survivors and family members of those who died, along with heartbreaking artifacts—shoes worn by survivors, a purse with change that Patricia Mary Fagan always kept on hand for the less fortunate, ID cards and pieces of paper that fluttered down to the pavement, a fireman’s hat. There are more than 10,000 artifacts in the museum’s collection. One of the survivors recalled, her voice breaking, telling one young fireman not to go inside, that there was nothing he could do. “It’s my job, lady,” he replied.

More than 1,970 oral histories have been recorded. (There is also a booth at the museum to record your memories.) 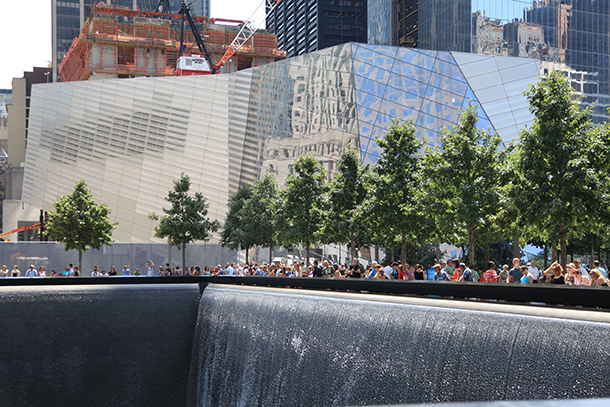 The memorial’s twin reflecting pools feature the largest manmade waterfalls in North America and sit within the footprints of the original Twin Towers. The names of every person who died in the 2001 and 1993 attacks are inscribed into bronze panels edging the pools.

In the “In Memoriam” exhibition inside the museum, there are portraits, spoken remembrances, and mementoes contributed by family members of the 2,983 victims. It’s a powerful reminder, David says, that “each person’s life had a story.”

On a recent rainy Saturday, Fia and David were tasked with showing the museum to a group of boys who attend a suburban high school under the auspices of a national program called A Better Chance. They didn’t remember that day at all.

The group agreed their visit was that much more meaningful because two of their peers interpreted the exhibits. “You can’t come to this museum and not leave a different person,” said Christopher Morales, who is from Los Angeles.

They checked out the massive mangled elevator motor and learned that the World Trade Center was famous for its express elevators—the most advanced in the world, yet they couldn’t save those who were trapped on high floors after the planes hit. 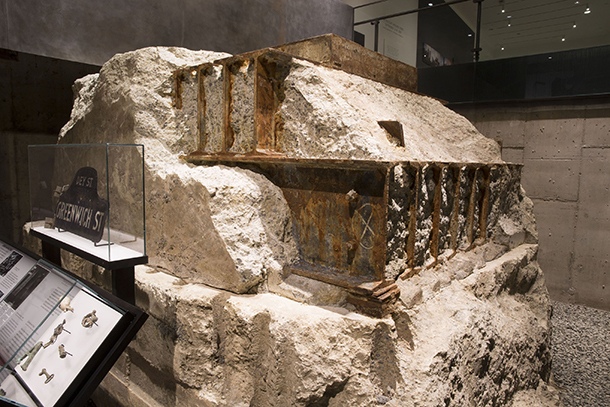 “No one thought those buildings would collapse,” David said soberly. That’s why so many firefighters and police officers—441 total—died. The Foundation Hall contains remnants from the Original World Trade Center, including the famous 36-foot-high “Last Column,” which became an ad hoc memorial of sorts, displaying poignant inscriptions and pictures. When the column was finally removed, it was given a hero’s funeral, complete with bagpipes. “It had become a symbol of strength,” David explained.

We couldn’t stop talking and thinking about what we’d seen—like the desperate notes and photos posted by families looking to see if their loved ones had survived. The majority had not.

“If you don’t remember what happened, these people all died in vain,” David and Fia said.

“The story hasn’t ended,” David added. “It’s hard to say if it will ever end.”