Can that feeling of helplessness you get when you’re stranded at the airport or stuck in traffic be alleviated by an app? Building America’s Future, a bipartisan association of elected officials, votes yes.

The group has partnered with the U.S. Travel Association to release an app that aims to ease travel frustrations by allowing Americans to quickly and easily complain to elected representatives. This is essentially an app for griping to the government about your poor transit experiences, from plane and train delays to traffic jams. Criticize your local administration via a swipe or two on your smartphone!

According to Governor Rendell, co-chair of Building America’s Future, “Usually commuters think traffic is like weather—it is something that happens to them and they have no control over it. But that isn’t the case at all. The policies we put in place, or the lack of a coherent long-term infrastructure plan, directly impacts the daily experience of Americans trying to get around their communities. This app gives commuters and passengers a tool to voice their frustrations to Congress. It is called ‘I’m Stuck,’ but the truth is America is stuck until Washington takes action.”

Let’s give a slow clap for Rendell.

Here’s how it works: When you open the app, first you will get a safety warning telling you not to use the app while driving. This is a good idea.

Now it’s your turn to tell the app how you’re “stuck”: 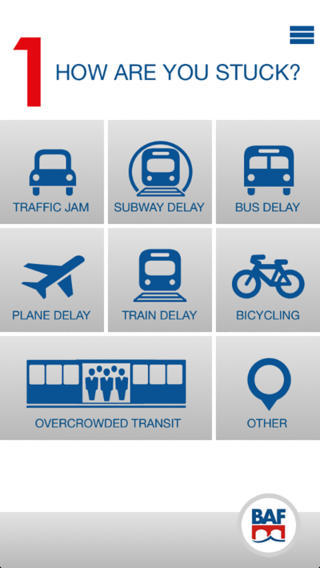 The bike option is a little puzzling to me. If you are stuck in a bicycle traffic jam, you are probably not in the United States.

The app will automatically fill in your location information, so your elected representatives will know exactly where the problem is. Next, provide more details on your personal hell. The program comes with pre-loaded complaint messages, but you can write your own if you want. Here’s an example given on the app’s iTunes page: 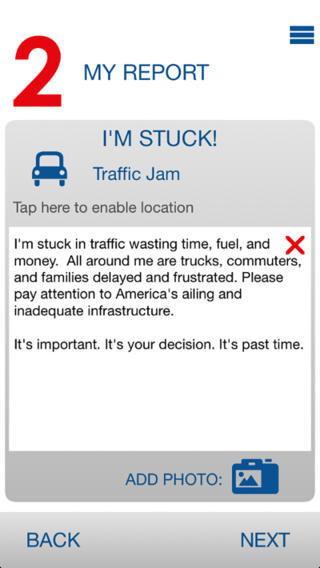 Once you input your home address, the app will display a list of local representatives to whom you can complain. I live in Boston. The app asked me if I would like to complain to Elizabeth Warren, Edward K. Markey, Stephen F. Lynch, or all of the above. Feeling vindicated, I sent my test complaint to all of the above. It’s important. It’s past time.

Would you use this app?