Last year, I spent my first holiday season away from my family, in warm weather, and in a foreign country. I’d moved to Sydney, Australia, in September, and I knew a holiday flight home would be too expensive. I wasn’t completely alone—there are super friendly groups of expats in Sydney, after all—but it was still the first time I wouldn’t see my family for Thanksgiving or Christmas. And it was wonderful.

As summer began in Australia, my family and friends at home were comfortably settling into fall. I found myself at the beach while friends were sipping hot cider and apple picking in New England. And while I missed them, I was completely satisfied sitting on my beach towel every weekend during “winter”—especially as it grew colder back home.

My Thanksgiving became a “Friends-giving,” and while I didn’t get to see my family, I still had all the turkey, sweet potatoes, pumpkin pie, and stuffing I could have imagined—on a rooftop overlooking the Sydney Harbor while wearing shorts.

There was no Black Friday madness following my Thanksgiving festivities, no bombarding holiday commercials, no crazed shoppers at the shopping malls, and barely any lines at the grocery store on Christmas Eve. This is not to say Australians aren’t festive and don’t celebrate the holidays. They do, but they don’t do it in the massive commercialized (and often absurd) ways we do here in the U.S.

Instead of waking up Christmas morning at my parent’s house to gifts under the tree, I woke up, put on a bathing suit and Santa hat, and headed to the beach. Christmas Day is the busiest day of the year at Bondi Beach, as groups of friends and families head to the popular spot with coolers and food to grill. Yes, this would be an appropriate time for the “Shrimp on the barbie” joke (although they call them prawns).

The simplicity of the day was a nice contrast to the years I’d spent with dozens of younger cousins and crazed family members on Christmas. Since Australia is mainly expats, immigrants, and first- or second-generation Australians, there’s an overall welcoming feeling, especially during the holidays. 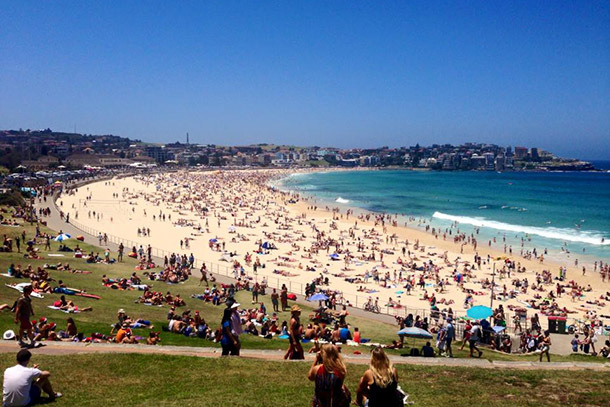 During the holidays, Australians simply refer to the months of December and January as “Silly Season,” which typically starts with the Melbourne Cup and ends with Australia Day at the end of January. Most people take time off, and work subsides as vacations and time with family and friends take place during the summer months. While I will always prefer snow and cold weather on Christmas, it felt refreshing to celebrate the holidays in a completely different way.

I wouldn’t want to do it every year, but every once and awhile it is nice to just pick up and leave everything behind. Sometimes breaking with tradition can be a great way to renew your holiday spirit.

Have you ever spent the holidays away from family and friends? Tell us in the comments below.