Update 1:42 p.m. ET: Southwest Spokesperson Olga Romero-Rios gives us the airline’s side of the story. “Employees in Houston have a vastly different account of what happened,” says Romero-Rios, who explains the decision to remove Erinn involved customer service agents, flight attendants, and the pilot; as a group, they believed that she was intoxicated.

Romero-Rios says that it is against federal aviation rules to let a visually intoxicated person fly, for the safety for themselves and other passengers. Romero-Rios alleges that Erinn “continued drinking beer during the conversation with the customer service supervisor,” and that she had “slurred speech.”

Finally, Romero-Rios notes that there were 60 empty seats on the flight, indicating that overbooking was not a factor in the airline’s decision. Romero-Rios says that Southwest “stands by their employees, and they know they made the right decision” by not letting Erinn board the plane.

Original story: Erinn, who has asked us to use her first name only, just wanted to fly home from New Orleans with her daughter and three colleagues on Monday. But, she says, Southwest refused to let her board her Philadelphia-bound flight. The shocking reason: She claims a Southwest employee accused her of being intoxicated. Erinn says she was sober, and she has the toxicology report to prove it.

Erinn tells us her side of what happened on Monday:

“Flight 657 (New Orleans to Houston) was delayed; there was about 15-20 minutes between departing 657 and boarding flight 3506 (the connecting flight to Philadelphia). The arriving/departing gates were in close proximity. I decided to use the bathroom and then, with my colleague, went to Buffalo Wild Wings for a beer, to go. The bar attendant put it into a clear plastic cup and we walked across to the boarding gate.

“I sat with my daughter and we both fiddled with our cell phones as they charged. I approached the counter to inquire if flight 3506 had been delayed and to verify that we were at the correct gate. Many passengers’ gates were changed (last minute), and the personnel looked frustrated in dealing with the overcrowding and standby situations. I struggled to limp to the counter because of leg pain. When I approached the counter, [the Southwest Customer Service representative] stated that our flight would be boarding in 10 minutes, however I would not be allowed to fly. I actually thought she was joking. 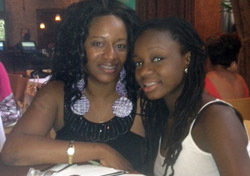 Erinn and her daugher

“She stated that I was drunk. I asked her if she was kidding. I offered to recite the Gettysburg address or to say the alphabet backwards. She asked me if I was on any medication. I disclosed that the only medication I take was for ADHD. She remarked that that medication should not be mixed with alcohol … She handed me a piece of paper with writing on it and instructed that I take it to the Hilton and that they would give me a room. She also questioned if I wanted her to call the cops. I responded that was exactly what I wanted her to do.

“When the police arrived he spoke with me and informed me that the airline reserves that right to refuse passengers. He also told me that he knew I wasn’t drunk but could not give me a breathalyzer, as they are only used in traffic situations. I was advised by an observer that the situation was not fair and suggested that I go to the hospital for a toxicology report for proof of random mistreatment. The hospital personnel and hotel staff were equally in shock when learning of the situation. They were so embracing. They helped alleviate the distress of the situation.”

Erinn says that she called Southwest, but was again told that the airline reserves the right to refuse passengers for boarding. She also received an automated e-mail response from Southwest saying that they are looking into the incident. She says that she feels “so dis-empowered; as a patron, customer, and a citizen. I just couldn’t believe this mistreatment could be legal.” She says she will never fly Southwest again. 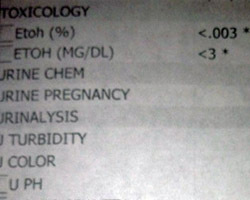 We asked her why she thought she was singled out, and she responded, “Southwest terminals were over-crowded, as Southwest is the ‘official’ airline of the Essence music festival we had just attended. There were many customers on standby. The counter agents [were] frustrated … I had asked my daughter, after being singled out, if my eyes were red due to the nap I had just taken. I had just departed the first flight and slept that entire flight. I did not have anything to drink on that flight, including soda. She stated that she didn’t remember but probably would have noticed if they were remarkably red.”

Erinn’s blood toxicology level was less than 0.003 when she had it tested at the hospital a few hours later. (She showed us the documentation.) Legal intoxication is 0.08 in most states.

Readers, what do you think of Southwest’s actions here? Was the airline justified, or is this just another example in a pattern of Southwest going too far? Share your thoughts below.