From obscure tropical islands to African deserts, volcanoes exit in almost any geographical climate. At many destinations, treks and tours often promise orange-red fireworks, but few actually deliver on live, flowing lava. And while a volcano’s behavior is extremely unpredictable, these 20 active ones give you a good chance to see some magma. 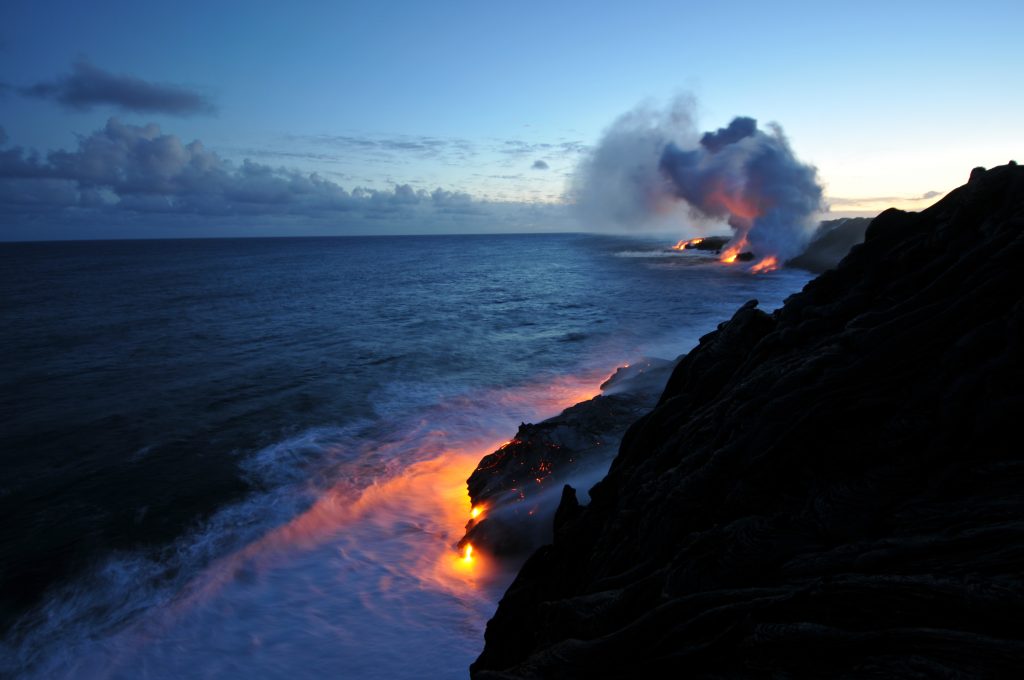 Located on the Big Island, Kilauea has been erupting since 1983 and it’s one of the most well-known places for volcano tourism. It’s located in the Hawaii Volcanoes National Park and monitored by the U.S. Geological Survey (USGS). Check in at the Kilauea Visitor Center near the park entrance and view the action from the Thomas A. Jaggar Museum‘s observation deck. There’s also a Lava Viewing Area accessible from State Route 130, as well as access via the Chain of Craters Road, Hilina Pali, and the Crater Rim Drive. You can even stay in the national park at the Volcano House or at a campground.

Before you go, check the NPS website about the current state and for any warnings. I also recommend reading the USGS’s fact sheet. 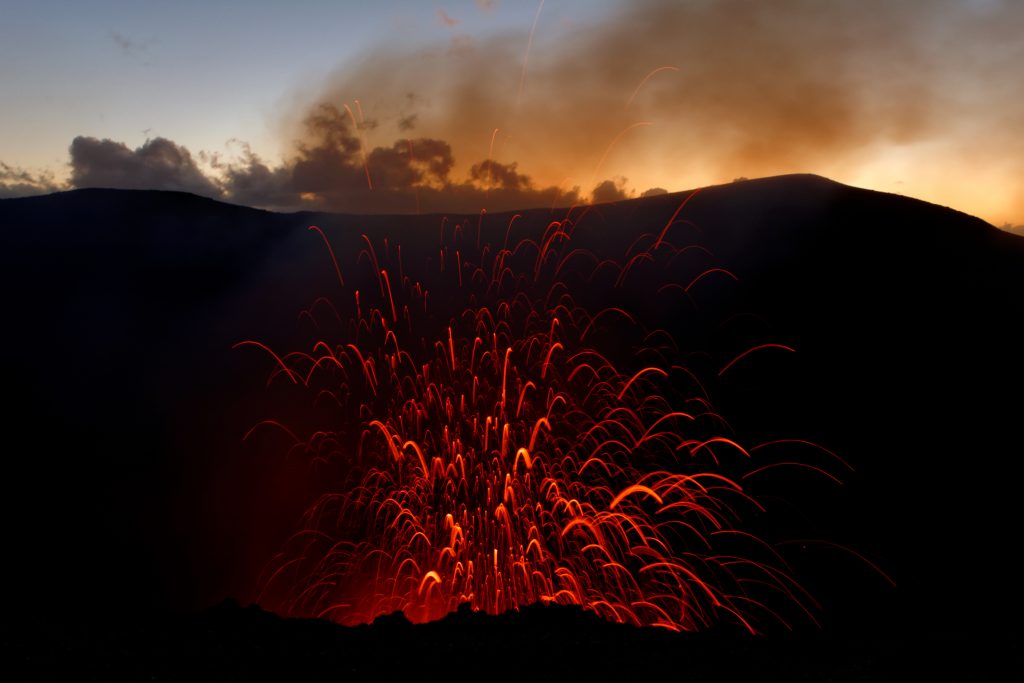 You’ll find Mount Yasur on Tanna Island in Vanuatu, an island chain in the South Pacific located between Australia and Fiji. The volcano is actively erupting, producing strombolian (firework-like sparks) eruptions visible from the ocean. It’s an easy climb to the summit—about a 15-minute walk—from the access road. Also consider going at night so you can see the orange sparks contrast the night sky.

Also in Vanuatu … Ambrym volcano’s most active craters often have small lava lakes and are popular tourist spots, too. 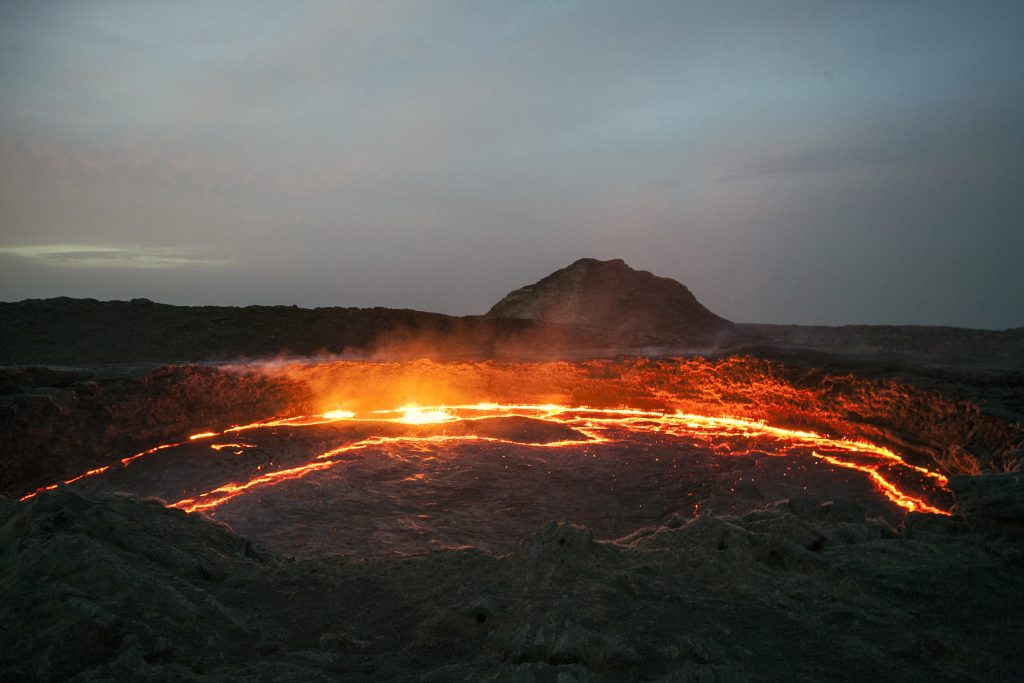 Famous for its boiling lava lake, Erta Ale is located in the Danakil Depression and has been mostly active since the 1960s. Getting there is not easy though, the base is about a six-hour drive from Hamedela (where most tours stay the first night) and the ascent to the crater takes around three hours and is usually done at night. It is highly recommended to go on a tour expedition as Ethiopia is politically unstable and has ongoing terrorist threats. Many tours will also explore the nearby salt mines, desert landscape, and crater lake. 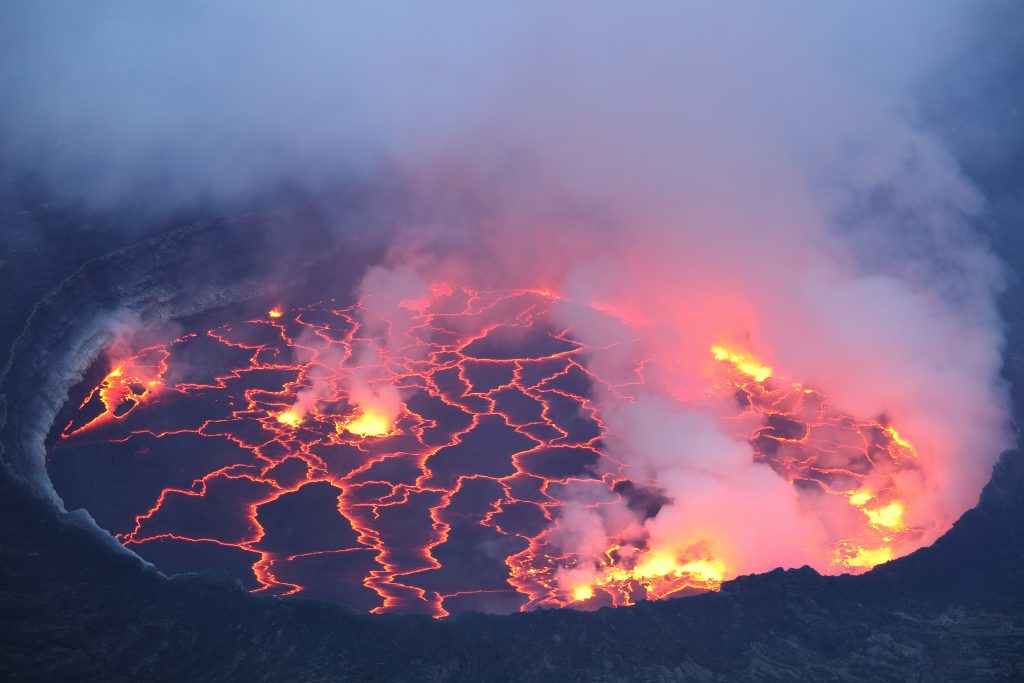 Located in Virunga National Park, this volcano sits at the border of DR Congo and Rwanda. It’s the world’s most active and largest lava lake that runs like water when it drains. In 2002 an eruption devastated the surrounding city of Goma, leaving 200,000 people homeless. After being closed for the past two years, the national park, also well-known for gorilla sightings, is open again and you can camp on the crater rim—the hike to the crater takes five to six hours.

8 Ways to See Wildlife Responsibly When You Travel 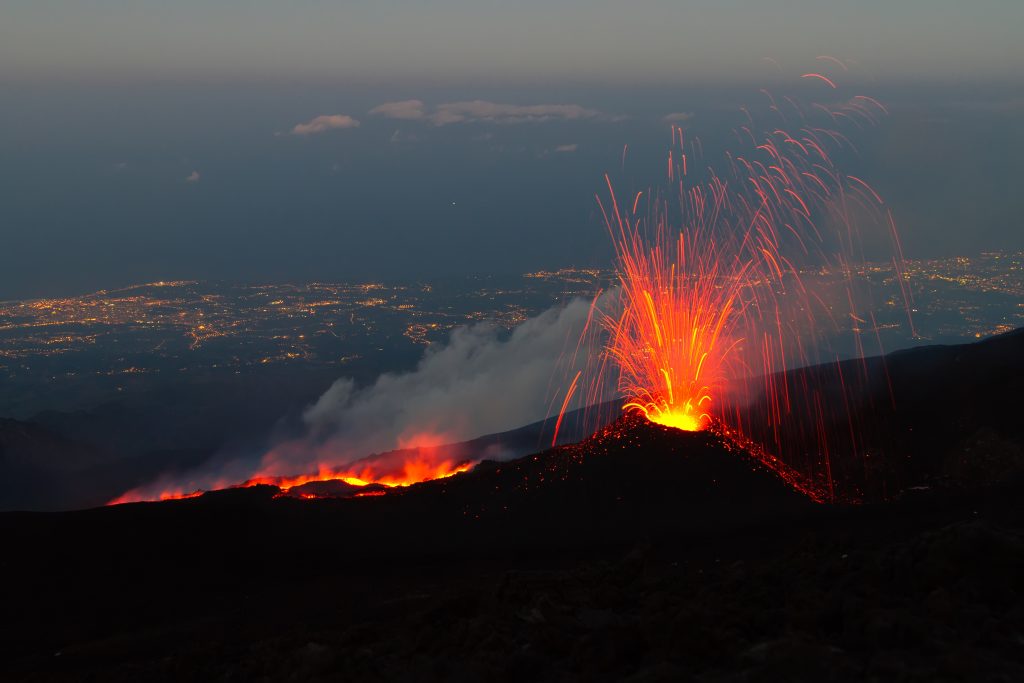 You’ll find Mount Etna on the coast of Sicily, and it’s the tallest active volcano in Europe as well as a UNESCO World Heritage Site. The last few years have seen various eruptions, from earthquakes to ash plumes, but are somewhat irregular. It is a huge tourist attraction, and the crater area is accessible via the Sapienza Refuge ski area where you can take a cable car up.

Also in Italy … Stromboli volcano, a small island north of Sicily has constant, small lava explosions (and is where “strombolian activity” got its name). It’s only legally accessible by guided tours and takes about three hours to climb. 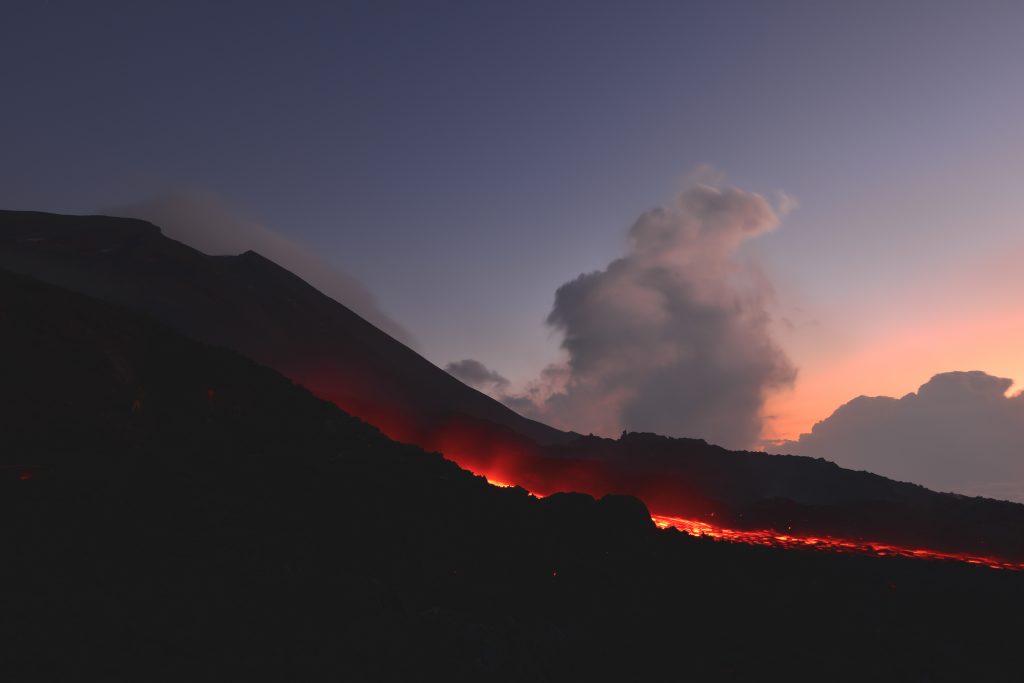 Located near Guatemala City and Antigua, Pacaya is one of the country’s most active volcanoes and has seen lava flows and strombolian activity in recent years. It is about a two-and-a-half-hour climb to the top and a guided tour is recommended as the hike requires some expertise. Trek on cooled lava flows and find hot-spots where you even can roast marshmallows. Horseback riding both ways or one-way is also possible.

Also in Guatemala … Santiaguito and Fuego volcanoes are also both active and have guided tours and camping options.

In March of 2015, there was a large eruption at Villarrica, but the mountain is now open again and is still currently erupting with reported increased activity and an active lava lake. It is located in Villarrica National Park, and ascents to the top are common, but be advised that they require a guide, proper equipment, and skill, as part of the trek includes an ice sheet. For more information on what the ascent is like, read this article from InterPatagonia so you know what to expect.

Patagonia and Torres del Paine: Hiking at the Edge of the World 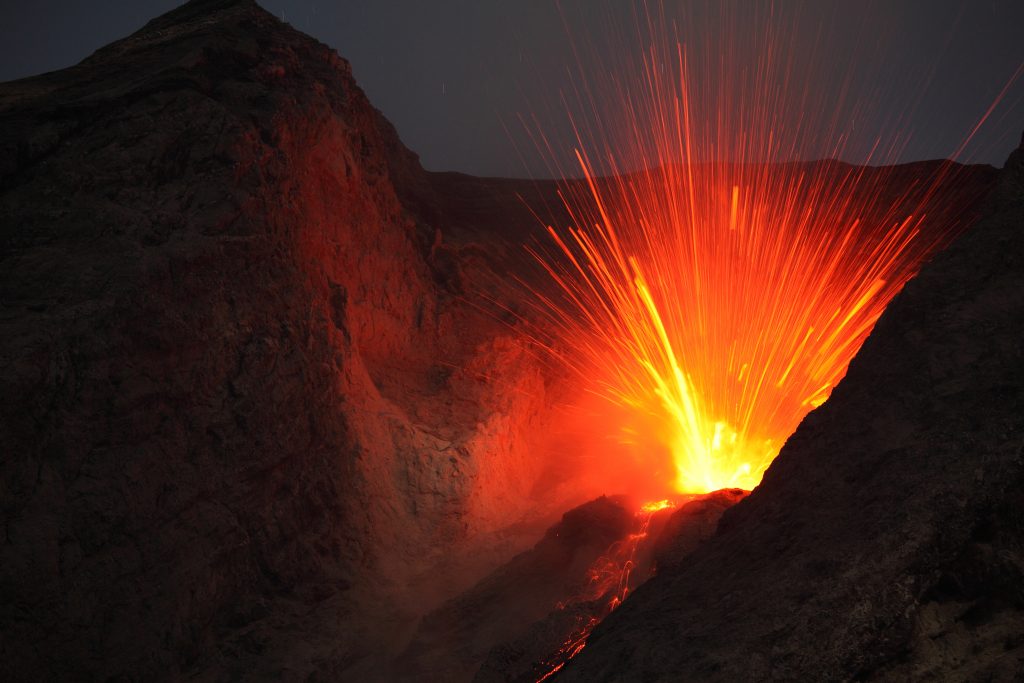 Batu Tara is a small island volcano that is frequently active with strombolian eruptions and ash plumes. Right now it has low activity, but is subject to change at any time. It typically has persistent strombolian activity like Stromboli in Italy. A guided tour is the only way to get to the volcano, and includes camping on the island. Many tours depart from Bali and include other Indonesian islands.

Also in Indonesia … Lokon, Soputan, and Karangetang erupt frequently and are included on most Indonesian volcano tours, like this one. Indonesia has 147 volcanoes in its island chain, making it a great destination overall for lava hunters. 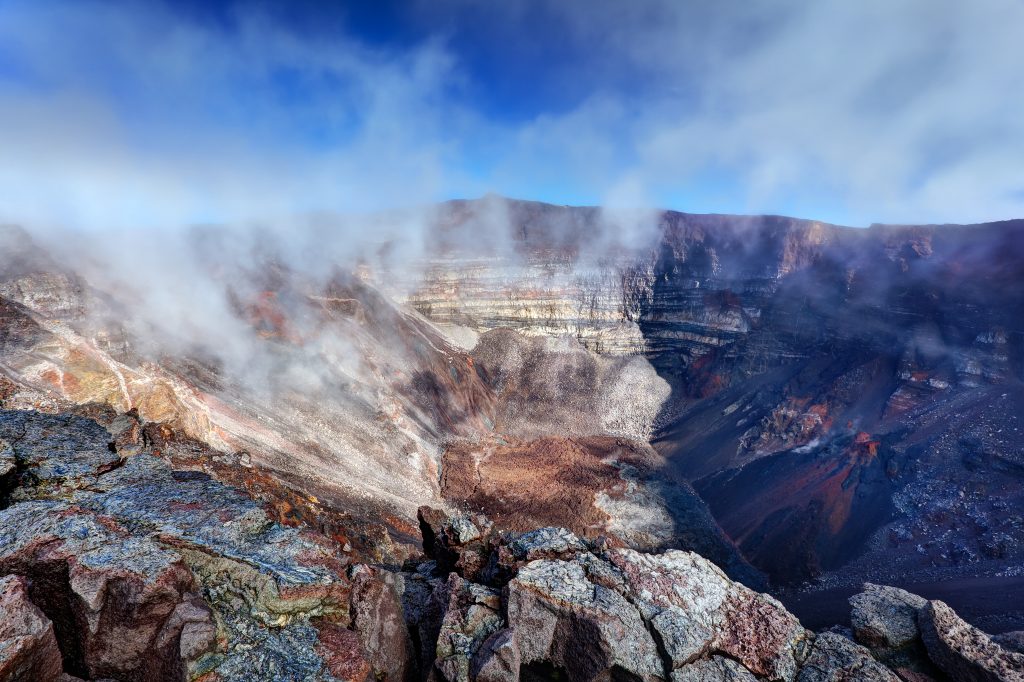 Its name translates to “Peak of the Furnace” and this active volcano is found on the French Reunion Island, west of Madagascar. You can hike inside the caldera via access from a coastal road, or view it from a tourist helicopter or airplane. Guided tours are available, otherwise you will need a car to get to the access road (Pas de Bellecombe). Check local conditions to make sure the path to the crater is open, if it is, the walk takes about five hours total.

Located in Turrialba National Park, this volcano is currently erupting (as of September 2016), so right now you cannot hike into the main crater. For now, you can view the volcano from the city of Turrialba until it is more stable.

Also in Costa Rica … While you won’t find flowing lava here, Poas Volcano National Park is one of the most visited volcanoes in the country due to its acidic crater lake, which sometimes acts like a geyser. 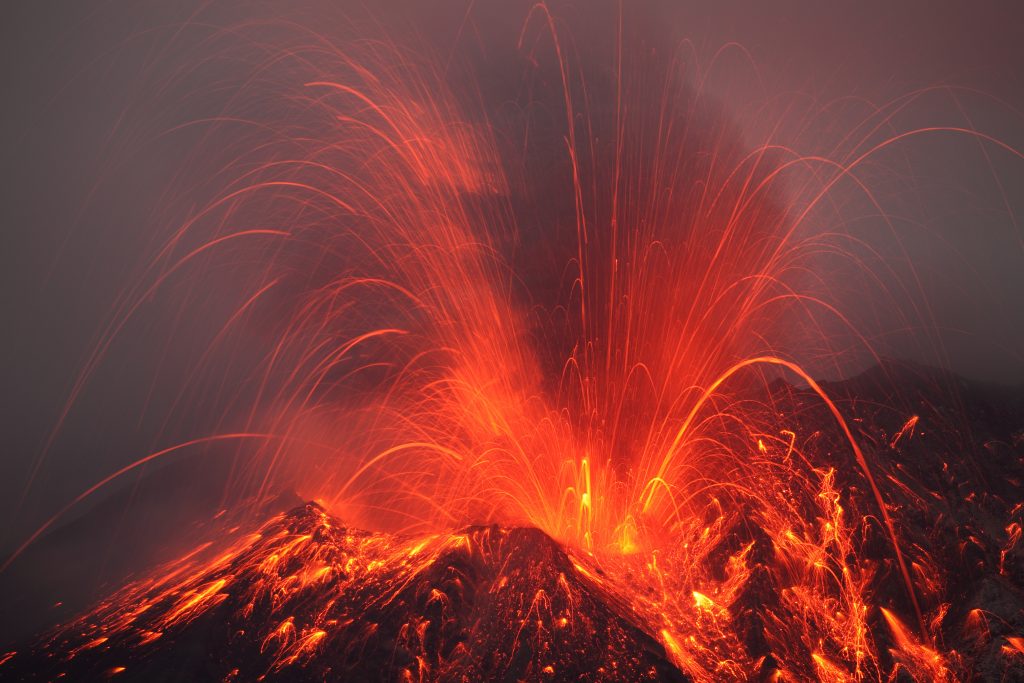 Sakurajima is one of the most active volcanoes in the world and has constant activity consisting of a variety of explosions—including volcanic lighting. It’s also located near the city of Kagoshima (accessible via ferry), which has a population of over 500,000 people, so it’s closely monitored. You can view the volcano at the Yunohira Observatory (the closest you can get to the crater), Karasujima Observation Point, along the Nagisa Lava trail, and at the Arimuar Lava Observatory. Check the visitor’s center for more information. 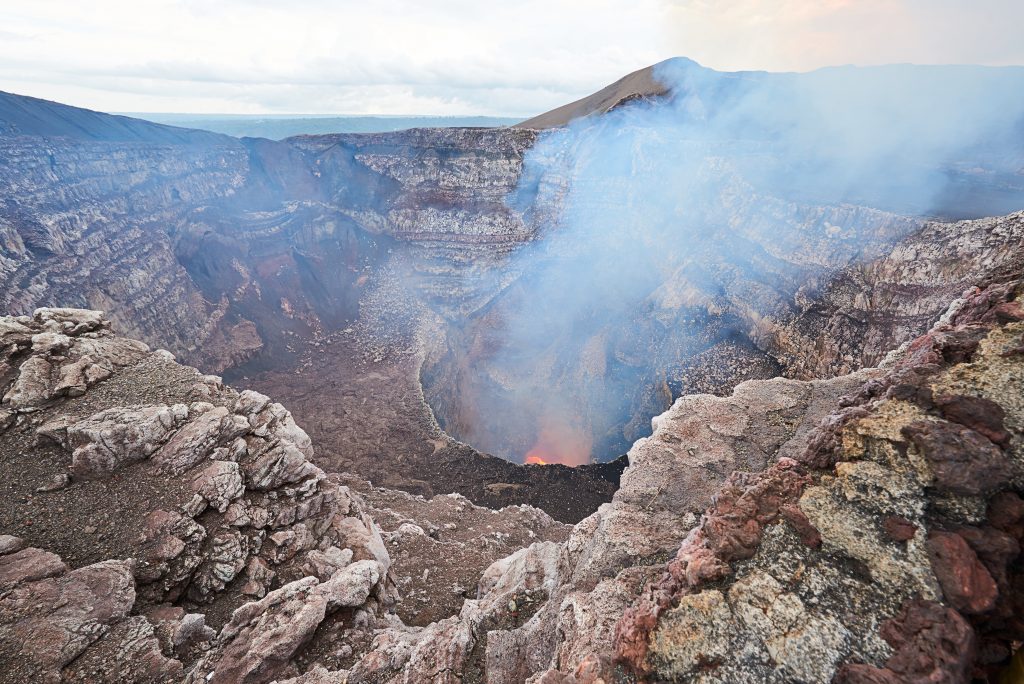 Masaya currently has a surface lava lake, making it a very popular tourist attraction. It’s located inside Masaya Volcano National Park, which has a visitor’s center and park guides. The park is accessible via car (tour buses and taxis will take you up there) or hiking (but only under ideal weather conditions). Night is a very popular time to go, so you will most likely experience long lines and a limited viewing period—it’s recommended to make reservations at least one day in advance. Make sure you stay up to date with the conditions as certain areas and tours operate depending on the volcano’s activity.

Also in Nicaragua … Telica volcano has a live steaming crater, and if you go at sunset or night you can see glowing magma. The hike is about one hour to the crater and tours are offered.