It’s a clear and sunny morning on Miami’s North Beach when I walk out to the balcony of my family’s vacation rental to do my morning scan of the beach below. There are some joggers and a few early-risers lounging in the post-sunrise glow, but all I can focus on is the thick line of brown separating the sand from the waves. The sargassum seaweed invasion that has been affecting North America’s tropical zones, from as far south as Trinidad and Tobago to as far east as Belize, was just as bad in Florida as I had feared it might be.

With the advantage of height, I spent my mornings in Miami surveying the beach from the balcony for our spot where the seaweed was not as thick. Once on the beach, I would tip-toe over the squishy and twiggy-feeling seaweed, trying to get to the water as quickly as possible. Occasionally, I’d miscalculate and enter the ocean only to be caught in a tangled mess of the stuff. Eventually, I’d give up, forcing myself to be satisfied with a quick dip and then retiring to my beach towel to close my eyes, listen to the ocean, and pretend the seaweed wasn’t there.

Sargassum seaweed blooms have been a regular occurrence in this part of the world for years, but 2018 has been the worst year yet. Throughout the Caribbean, seaweed is washing up in massive amounts, and while hotels and cities are doing their best to clear it from the beaches, more keeps on coming. This year, Cancun made headlines for its endless deluge of seaweed; in June, the Quintana Roo Secretary of Ecology reported that the region had removed 717 tons of sargassum seaweed so far in 2018. The clean-up in Cancun and other major destinations throughout the Caribbean and along the Gulf Coast is ongoing, but on islands and beaches with fewer resources, the seaweed is piling up faster than anyone can keep up.

8 Places Where Air Pollution Can Ruin Your Trip

If you’re in the midst of planning a beach vacation in Florida, the Caribbean, or anywhere along the Gulf of Mexico, you’re likely to encounter this invasive vegetation. Here’s everything you need to know about sargassum seaweed, so you can be prepared and plan your beach vacation accordingly. 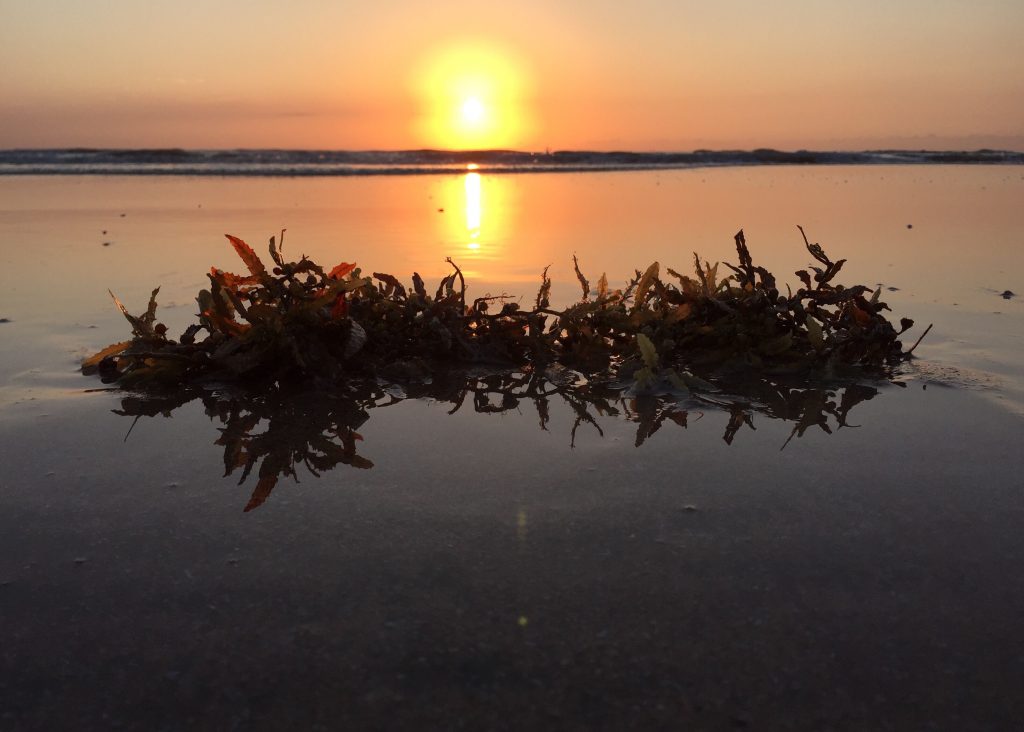 The sargassum seaweed invading the beaches is a new kind of natural disaster. It was only in 2011 that this region of the world began seeing an influx of seaweed. Not much is known about what caused the seaweed blooms, but scientists agree that this new phenomenon is not entirely natural. In 2016, a team of researchers tracked the blooms to an a tropical region near the northeast of Brazil, where the massive originating bloom has been thriving thanks to a rise in ocean temperatures and nitrogen pollution. Nitrogen pollution is caused by fertilizer and sewage runoff that is known to feed algal blooms. Ocean currents have carried the blooms northward, and because sargassum is a plant that reproduces on the surface of the water (unlike other kinds of seaweed that plant themselves in the sand), the blooms have been able to keep growing as they travel.

8 Ways to See Wildlife Responsibly When You Travel 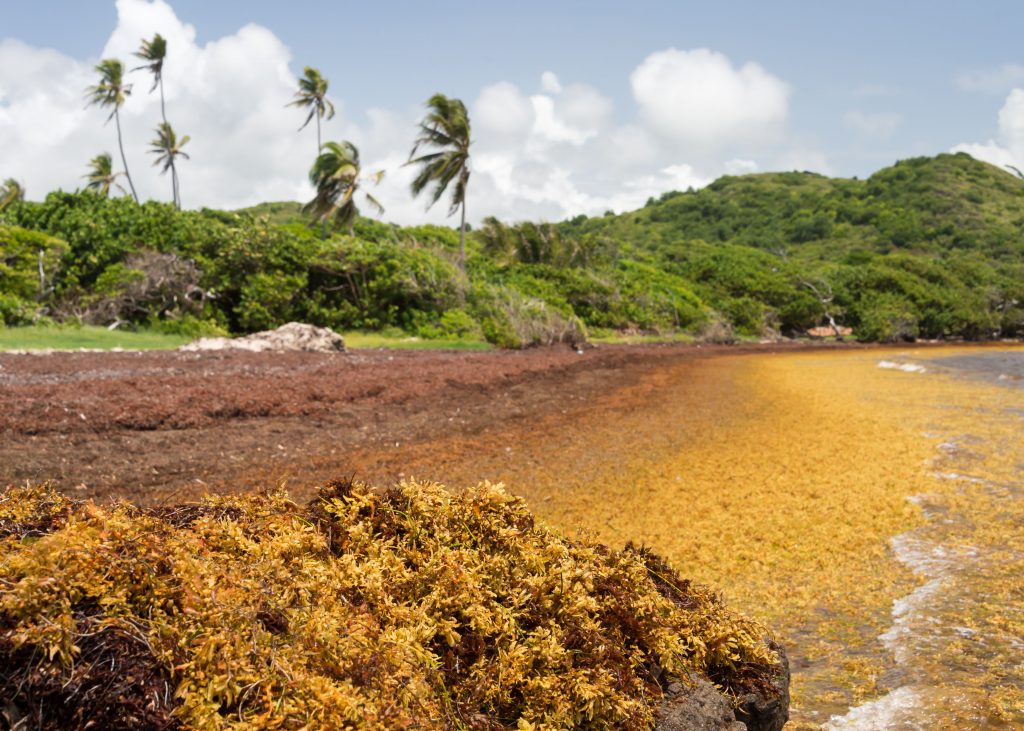 According to this map created by a professor at the University of Sydney, sargassum has been spotted on the beaches throughout the tropical Gulf and Caribbean, sometimes floating as far north as Cape Cod and Nova Scotia. Over the years, researchers have tracked the movements of the sargassum and discovered that there is somewhat of a consistent pattern. In the spring and early summer, the seaweed flourishes and accumulates in the Caribbean and Gulf of Mexico, before being exported into the Atlantic by way of the Gulf Stream, where it will eventually die off in colder waters.

For a beach vacation in the Caribbean, Florida, or the Gulf of Mexico, you will be hard-pressed to find a beach not enduring the onslaught of seaweed. However, beach destinations like Colombia and Panama that sit on the southwestern edge of the Caribbean Sea have not seen the massive amounts of seaweed endured by their northern neighbors.

Beaches Overrun by Smelly Seaweed Could Be the New Normal in Florida, Caribbean 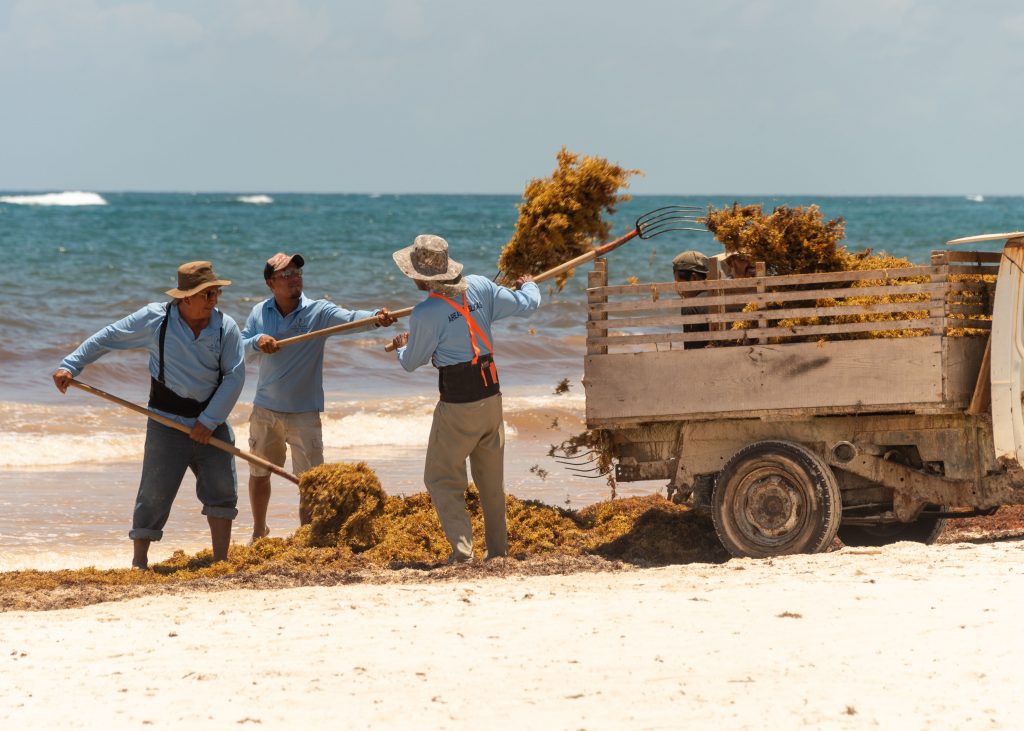 The seaweed in Mexico, Florida, and the Caribbean isn’t just off-putting; it’s also an incredible burden on the environment and economies of many of these destinations. The seaweed mats are harmful to marine life like sea turtles, who struggle to surface underneath their mass.

Many hotels and other hospitality-related businesses are worried the seaweed will discourage tourism. At major resorts and in popular beach towns, workers utilize heavy machinery to gather the seaweed on the beaches, but the task has to be repeated daily as more seaweed washes up. In Florida and Mexico, sargassum removal boats attempt to collect the seaweed before it reaches the shore, though at best, this just reduces the amount of seaweed that makes it to the beach.

Even with the united efforts to clear the seaweed, the question remains—what do you do with it? In many places, such as Belize and St. Vincent and the Grenadines, burying the sargassum is the best solution and can actually help prevent beach erosion. However, in June, Barbados declared the influx of seaweed a national emergency, urging local businesses to find a commercial use for the seaweed, either as fertilizer or as an energy source. If a money-making use is found for the seaweed, that will be plenty of incentive for many to make a business out of cleaning up the beach.

Making the Best of It

While it’s unclear if and when the seaweed will clear out, travelers shouldn’t let the presence of the seaweed derail their vacation plans.

If you’re already booked for the Caribbean, Florida, or Mexico and the seaweed is overwhelming, use this opportunity to travel in a new way. Instead of hitting the beach, you can sign up for a boat excursion or city tour. And if you must have your lounge time, you can book a hotel with a seaweed-free pool. If you haven’t booked yet and don’t want to take your chances, consider this your opportunity to finally book that dream trip to Hawaii or to explore the beaches of Europe.

And take heart: It might be ugly and it can sometimes get smelly when it starts to decompose, but this seaweed isn’t toxic. Aside from its off-putting appearance and texture, sargassum is harmless to humans.

Jamie Ditaranto is writer and photographer always looking for her next adventure. Follow her on Twitter @jamieditaranto.