European bathrooms can be quirky. Just keep an open mind, and remember that nothing beats a good bathroom story when you get home.

First, don’t expect big spaces. Over the years, hotel owners have carved out chunks of elegant bedrooms to shoehorn in prefab private bathrooms—and they can be very tight. Be careful bending over in the shower to pick up a dropped bar of soap—you might hit your head on the sink or toilet.

Toilets come in many forms. Older ones may flush with a pull string; modern ones may be more green, with two buttons to flush: one for lighter jobs, the other with more oomph. Some toilets—in lands where locals don’t use toilet paper—come with a little squirter for rinsing. In Great Britain, you’ll likely come across the “pump toilet,” with a flushing handle that doesn’t kick in unless you push it just right or several times. (Be decisive but not ruthless.) Some countries like Greece and Turkey have very frail plumbing. If you see an adjacent wastebasket with dirty toilet paper in it, that’s a sign that the local sewer has a hard time handling TP. (The rule of thumb in those places: Don’t put anything in the toilet unless you’ve eaten it first.)

At some point, you’ll probably encounter a mysterious porcelain thing that looks like an oversized bedpan. That’s a bidet, which never functions as a toilet but as a place for a quick sponge bath. Go ahead and give it a try. Just remember the four S’s—straddle, squat, soap up, and swish off. 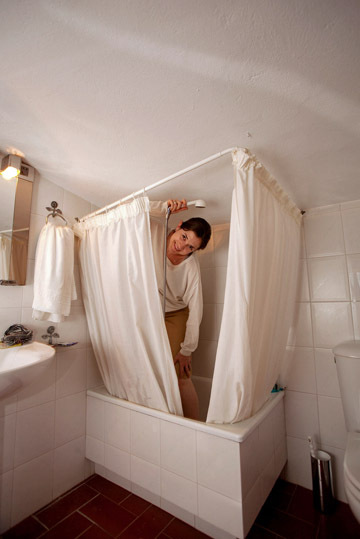 Showers can be equally mysterious. The dangling cord is not a clothesline; it’s to alert the front desk if you’ve fallen and can’t get up. This might not bring anyone to your aid, though. One of my tour guides in Croatia, lingering at the reception desk as his group went to their rooms, saw the room lights flash on one by one as the guests pulled these emergency cords. The hotel staff, figuring each flash was just another tourist mistakenly pulling the wrong string, just shrugged and ignored it.

Back when I was a student sleeping in dives, just getting a warm trickle to shower in was a challenge. These days getting hot water isn’t an issue, but be speedy. To save energy, some hotels use little-bitty water heaters—after five minutes, your hot shower may turn cold.

If you start out with cold water though, it’s often just a matter of figuring out the system. The red knob is hot and the blue one is cold—or vice versa. There are some peculiar tricks. For instance, in Croatia, look for the switch with an icon of a hot-water tank (usually next to the room’s light switch). If you can’t find the switch to turn on the shower, it may be just outside the bathroom. In Italy and Spain, “C” is not for “cold” but for caldo/caliente—hot.

Handheld showers are common. Sometimes the showerhead is sitting loose in a caddy or mounted low on the tub. Not only do you have to master the art of lathering up with one hand while holding the showerhead in the other, but you also have to keep it aimed at your body or the wall to avoid spraying water all over the bathroom.

One night in Spain, as I was crowded by my hotel’s shower curtain, it occurred to me that no hotel in Europe has invested in the wonderful bent curtain rods that arc out—giving big Americans in need of elbow room a more spacious place to shower.

Even in top-end hotels, I find some things poorly designed. Once, I used a particularly narrow shower stall with the hot/cold lever directly in the center. If I nudged it accidently while washing, it would either scald or freeze me. And even worse, there was no place to put soap but on the floor or balancing precariously atop the sliding door. In Montenegro, I stayed at a trendy hotel on the Bay of Kotor. My bathroom was far bigger than many entire hotel rooms—but the toilet was jammed in the corner. I had to tuck up my knees to fit between it and the sink cabinet. The room was dominated by a Jacuzzi tub for two. I’m certain there wasn’t enough hot water available to fill it. I doubt it will ever be used, except for something to admire as you’re crunched up on the toilet.

Your hotel’s WC may come with luxurious heated towel racks—or a rattling fan and leaky sink. Either way, my advice is to wash up quickly and get out and about in the place you came to enjoy.