When I visited Berlin recently to update my guidebook, I also scouted locations for a new TV show. I found the city as vibrant as ever—with massive infrastructure projects in progress all around town. The cranes speckling the horizon in every direction put an end to the idea of filming anytime soon—but the commotion is not a problem for visitors. If anything, seeing all the changes in the works made me eager to come back soon to see the Berlin of the future.

But even as the city busily builds itself into the 21st century, Berlin has made a point of acknowledging and remembering its past. A series of thought-provoking memorials installed throughout the city center directly confront some of Germany’s most difficult history of the last century. Lacing these sights into your Berlin sightseeing is a way to learn from those difficult times.

Close to the iconic Brandenburg Gate is the Memorial to the Murdered Jews of Europe, the first formal Holocaust memorial to be sponsored by the German government (in 2005). Nearly 3,000 gravestone-like pillars, all roughly the same size but of different heights, spread out in a grid over an open field. There’s no central gathering point to the memorial, and visitors can enter it from all sides. Because the ground is unevenly inclined, a visit can be disorienting, as points of reference shift or disappear as one walks among the pillars. It’s an effective way to force visitors to reflect on this inhumane chapter in human history. 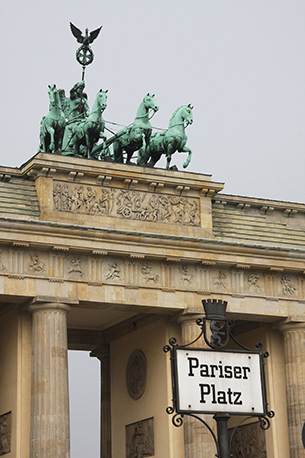 Nearby, among the trees at the edge of Tiergarten Park, are two more memorials. The first, erected in 2008, remembers homosexuals victimized under the Nazi regime. There’s no inscription or signage of any sort on this stark memorial—just a small window through which you can watch a film loop of a same-sex couple kissing. The message: Life and love are precious, regardless of whom we love.

The second memorial, unveiled in 2012, commemorates the roughly 500,000 Sinti and Roma people victimized under Nazi rule. The relatively humble memorial, a simple circular reflecting pool surrounded by stone slabs, has a ragtag feel. “Do you speak English?” ask beggar ladies—bussed in by traffickers from Romania—who hit up visitors here at their own memorial. It’s a chance to appreciate the plight and struggles of this fragmented community who refuse to conform to modern norms.

As you stroll through Berlin’s residential neighborhoods, you might notice small bronze plaques in the pavement. These are a different sort of memorial, called Stolpersteine—”stumbling blocks.” Meant to commemorate in a more personal way those persecuted by the Nazis, the stones are placed in front of the spot where victims resided. Each stone begins with “Here lived”—giving one name, remembering just one person. The inscription ends with the place—usually a concentration camp—and the date on which the individual died. Thus far, more than 5,000 Stolpersteine are installed around Berlin.

The most historic square in Berlin, Bebelplatz, has a glass plate set into the pavers at its middle. Beneath it is a room with empty bookshelves. This is the memorial to the notorious Nazi book burning of 1933. It was here that staff and students of Germany’s top university threw 20,000 newly forbidden books (by writers such as Einstein, Hemingway, Freud, and T.S. Eliot) into a huge bonfire on the orders of Nazi propaganda minister Joseph Goebbels. The Prussian heritage of Frederick the Great—who built this grand square—was one of culture and enlightenment. Hitler chose this spot to thoroughly squash any notions of tolerance and acceptance. A century earlier, the German poet Heinrich Heine had written, prophetically, “Where they burn books, in the end they will also burn people.”

Crowned by the Brandenburg Gate, the ultimate address in Berlin is the square called Pariser Platz. Within 100 yards you have the ultra-high-security American Embassy, a big Starbucks, the hotel balcony where Michael Jackson dangled his baby, and the glass dome capping the Reichstag roof, from where Russian troops quelled a furious Nazi last stand in May 1945. Crossing Pariser Platz, I found it hard to avoid a burst of sadness, thinking of the horror and violence that has visited this place. But I was jolted out of my dark cloud by strains of lively music. A group of string musicians had set up here, on ground that was once a nightmarish no-man’s-land. As I listen to them play with deep passion and joy, I reminded myself to embrace the world constructively and positively, remembering how much is not wrong. In so many ways, a visit to Berlin can be an inspirational reminder to never forget.