Among the mangroves and mimosa trees, away from the skyscraping high-rises, the old Caribbean can still be uncovered. This is a low-key Caribbean, a natural Caribbean, where you won’t get white-glove service (or even in-room televisions), but you will find comfortable spaces in settings so serene they feel a part of the very islands on which they reside.

This is Laurance Rockefeller’s Caribbean.

A member of the American philanthropic family, Rockefeller was also an ardent conservationist and a firm believer that public lands should be protected. He applied his vision to a kind of do-gooder venture capitalism, forming RockResorts in the 1960s on the idea that luxury needn’t be destructive and resorts should celebrate their natural surroundings rather than bulldoze their way in.

With the construction of Caneel Bay Resort on the then-unexplored island of St. John, Rockefeller combined the summer family vacationing that was popular in the midcentury (think Dirty Dancing‘s Catskills retreat) with the island’s lush tropical vegetation and pristine beaches, indulging the landscape and its quirks but never erasing them.

Caneel Bay was, and is, eons away from the multinational chain all-inclusives that dot other Caribbean islands. The resort, now independently owned and operated, still retains the subdued charms its founder intended.

In many ways, the resort, which is set on a 170-acre peninsula that juts into the Caribbean, feels like a secluded, sun-kissed playground for grown-ups. There are no concrete expanses, mega ultrapools, or neon-lit dance clubs. Instead, small cottages and single-level buildings blend into the resort’s seven beaches, gentle rolling hills, and lush green forests. Donkeys, deer, and large iguanas roam the property, but as a general rule, crowds do not: Six of the seven beaches are for resort guests only.

Seclusion comes naturally in rooms free of telephones or televisions. While they’re not luxuriously appointed, the rooms are comfortable, with panoramic views from big windows. To visitors looking for all-you-can-eat meal plans and in-room butlers, Caneel Bay may lack comfort. But for others, the free kayaks and snorkeling gear are all that is needed. Forest trails thread through the resort grounds and lead to sugar-mill ruins and dense vegetation packed with cactus plants and echoes of birdcalls. Coral reefs teeming with schools of tropical fish ring the property’s beaches, rivalling nearby Trunk Bay’s world-famous underwater trail. Clusters of hawksbill turtles nibble on and float serenely above the reefs. Who needs that ultrapool anyway? 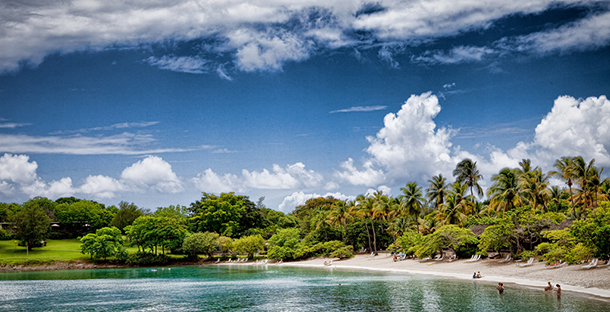 Travelers can only access St. John via ferry, which makes the island a cruise-ship-free refuge. Like St. John itself, Caneel Bay has a similar attitude about the everyday cacophony of the maddening crowds. This disconnected paradise of national parkland has no use for them, or timetables, or television sets. The resort is also curiously modest about its green values; at dinner, there is no Portlandia-esque recitation of the exact origins of ingredients. But this is somehow fitting. Everything at Caneel Bay, even the resort’s own environmental aims, is subtle and subdued.

Just 40 miles away, on the British Virgin Island of Virgin Gorda, you’ll find another Rockefeller hideaway. Here, on a half-mile crescent-shaped beach in what was once an isolated agricultural community, Rockefeller established the resort of Little Dix Bay. The area flourished when Rockefeller began building in the ’60s, a rare turn of events in a time when tourism infrastructure often meant natural destruction.

Little Dix Bay, now owned by Rosewood Hotels & Resorts, is smaller and more elegantly appointed than its St. John cousin, with large rooms clustered around the wedge of white-sand beach. It, too, seamlessly celebrates the island on which it resides, with buildings made from indigenous materials and a layout that follows but does not cut into Virgin Gorda’s landscape. A five-year multimillion-dollar renovation of the resort led to creature comforts more in tune with current luxury-travel expectations (a two-tiered free-form swimming pool, a spa with local-goats-milk-and-honey treatments). Still, the main draw here is the land: Unique geographical formations (including the island’s eponymous baths) and gin-clear water are the reasons to visit Virgin Gorda, and Little Dix Bay honors its setting admirably.

“In the midst of the complexities of modern life, with all its pressures, the spirit of man needs to refresh itself by communion with unspoiled nature. In such surroundings—occasional as our visits may be—we can achieve that kind of physical and spiritual renewal that comes alone from the wonder of the natural world.”
—Laurance Rockefeller

Rockefeller couldn’t have foreseen the technological advances that have come with the 21st century—the constant connectedness, the almost never-ending status updates, the marathon strings of text messages. But he did appreciate that humanity would need a few places to unwind, to cut the ties and cables and power cords that bind, and to refresh ourselves in the wonder of the natural world.

Have a question for Dara about her trip? Planning a trip yourself and need advice? Want to share your own St. John or Virgin Gorda experience? Leave a comment below or contact her via editor@smartertravel.com. You can also follow Dara on Google+