Istanbul is too big and too diverse to limit yourself to just one neighborhood. But getting around in a car can take a painfully long time—it’s one of the largest cities in the world, and it has the traffic to prove it. So it makes sense to spend a few nights in different areas of the city, taking time each day to explore a different side of Istanbul. Here’s how I did it, by staying in three different hotels on a recent trip.

Tourists often skip the Asian side of Istanbul or relegate it to a quick stop on a Bosphorus cruise just to tick off another continent. That’s a shame. This is where you’ll get a real taste of local life, minus the tourist crowds. Plus, you’ll have glittering city views of the more built-up European side.

The Asian side’s answers to the Grand Bazaar are the Sali Pazari and the Kadiköy markets, both much less stressful than the infamously high-pressure Grand Bazaar. You’ll be able to buy anything you need here, from cheap clothes to antiques to delicious eats, such as lahmacun (flatbread topped with lamb), fresh fish, and authentic Turkish delight.

The 360-degree views of the city from the Maiden’s Tower, just a few hundred yards offshore in the Bosphorus, are also noteworthy. (You may recognize the Maiden’s Tower—it’s been in two James Bond movies.) It’s easy to get to the tower by boat, and afterwards, you can stroll along the promenade up the water, watching the fisherman and locals relax.

If you’re in a partying (or eating) mood, head to the neighborhood of Kadiköy. Here you’ll find bars and nightclubs that are slightly less frenetic (and cheaper) than those on the other side of the strait. You’ll also find plenty of coffee shops and cafes to sample.

Stay: Hotel Sumahan on the Water

This portion of your trip is all about the Bosphorus. Sleep on its shores at Hotel Sumahan on the Water. This contemporary boutique hotel is located right on the shore, and it offers unobstructed views of the water and city from your room. There’s no better way to end your evening than with a cocktail at the hotel’s waterside restaurant (complete with outdoor heat lamps that keep away the nighttime chill on the patio) as you watch the Bosphorus Bridge’s lights come on for the nightly twinkling show. Breakfast is served in this space, too, so you can watch the sunrise while you munch on fresh-baked simit, a Turkish specialty that’s similar to a sesame-seed bagel. 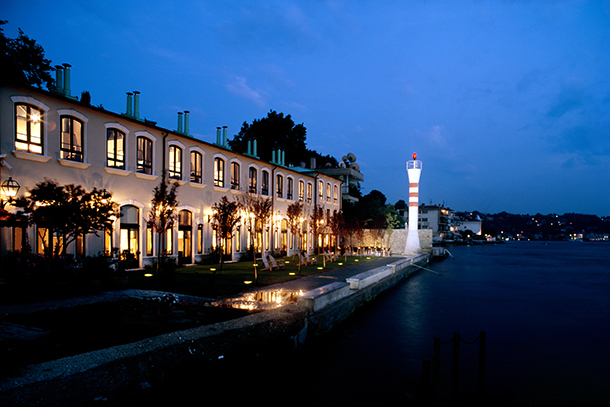 The design of the hotel embraces the water from every angle. It also has a unique history: Sumahan was once a 19th-century distillery that produced suma, which is used to make raki, a favored anise-flavored spirit that’s very popular in Istanbul. Each of the property’s 24 rooms has an individual design scheme, but all feature up-close-and-personal views of the Bosphorus strait. 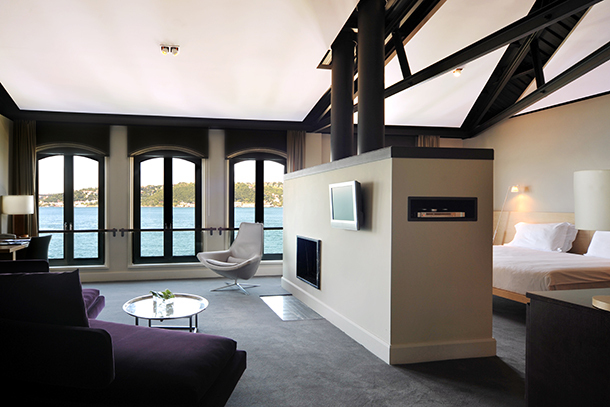 Take advantage of Sumahan’s complimentary boat shuttle when you’re ready to move on to your next location: the European side.

The Pera Palace Hotel Jumeirah is famous for its grandeur and history. Built in 1892 to accommodate the passengers of the Orient Express, it has hosted icons like Agatha Christie (who is said to have written Murder on the Orient Express here), Alfred Hitchcock, Greta Garbo, and Ernest Hemingway (whose main character stays at the hotel in The Snows of Kilimanjaro). Smack in the heart of the Beyoglu district, it’ll put you in a prime position for exploring Istanbul’s most famous sites.

The hotel overlooks the Golden Horn and the historical old city, and you’ll be within walking distance of the Bosphorus and the Galata Tower. The Atatürk and Galata bridges make it easy to walk everywhere you want to go, or you can use the city’s metro, which stops near the hotel.

Best of all, you’ll be close enough to Taksim—home to most of the city’s liveliest bars—but far enough away that you won’t be disturbed by the loud music and crowd noise when you’re trying to sleep. Wander down Istiklal Street, which is packed with rooftop bars and street-side restaurants for colorful people-watching opportunities. Rooftop bars are everywhere in Istanbul, with everything from small cafes to luxe hotel bars featuring amazing city views. 360 Istanbul, one of the most famous rooftop bars, can be skipped in favor of some of the less frequented ones, as the view isn’t any better than what you find at other bars and the service is slow (and overpriced).

My favorite rooftop bar in Istanbul is at The President Hotel (which is, surprisingly, owned by Best Western). It offers panoramic views, as well as little lookout areas perfect for photo ops. There were hardly any other patrons there during my visit. 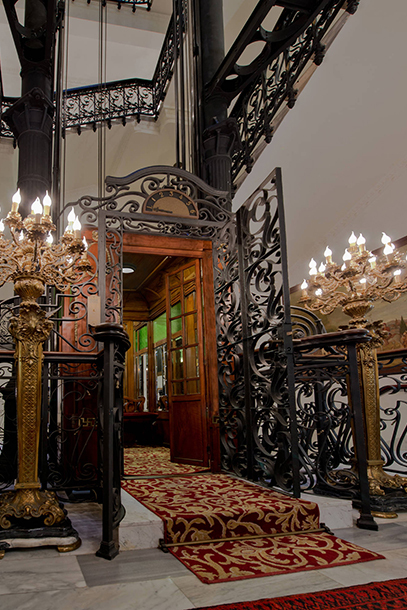 Don’t expect dated furnishings at the Pera Palace Hotel Jumeirah, despite its age and history. The property closed in 2008 for a two-year, $30 million renovation and reopened with all the modern amenities. I enjoyed riding the historic elevator to my room: An old-fashioned lift with a cage that you have to close to operate, it was the first electronic elevator in Istanbul. (There are modern elevators too, if you’re claustrophobic.) Be sure to take a tour of the Atatürk Suite, which has been converted into a museum. Here, you’ll find memorabilia from the founder of modern-day Turkey, Mustafa Kemal Atataturk

Don’t leave without sampling the pastries at the Patisserie de Pera, where you’ll be transported to Paris—especially if you get the macarons. Hit the Orient Bar, which has kept all of its original glamour and is full of dark wood and velvet fabrics. When you drink here, it’s easy to imagine that Hemingway just vacated the bar stool you’re currently occupying. Even if you’re not staying at Pera Palace, it’s worth visiting the hotel to take English-style afternoon tea in the lobby lounge. It’s the ultimate in indulgence (especially if you opt for champagne over tea). Breakfast is served in the classy Agatha Restaurant and offers a buffet of Turkish dishes, great for sampling local flavors, as well as more English breakfast items like eggs and fresh-squeezed orange juice.

Rooms are thankfully modern, with well-insulated glass that buffers any noise from outside. The bed, outfitted in crisp linens and a feather duvet, was one of the most comfortable I’ve ever slept on. The bathroom feels like your own private Turkish bath. All rooms are spacious, and some are themed around the famous guests who’ve stayed here (like the rose-hued Greta Garbo Corner Room). 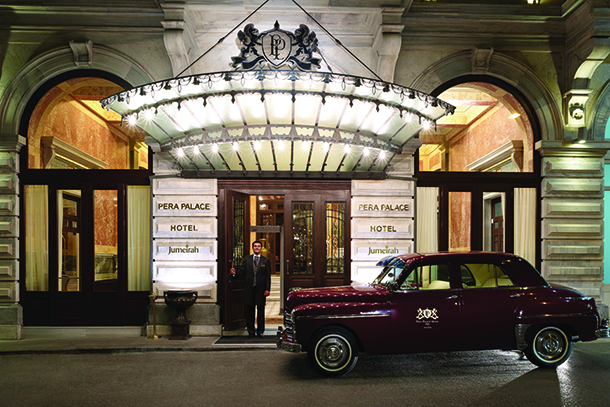 There’s no better way to take in Istanbul’s booming luxury industry than by splurging on a night at the brand-new five-star Raffles Istanbul, located in the Zorlu Center, a $2.5 billion open-air complex that houses apartments, retail shops, and eateries. This is where you’ll find the fashionable locals. Spend time checking out the open-air concerts and performances and wandering around all of the high-end stores, from Tiffany to Burberry. You’ll also find all the big names in cuisine here, such as Mario Batali’s Eataly and Jamie Oliver’s Jamie’s Italian. The center houses a metro stop, so you can quickly hop back into the old city. If nothing else, just wandering around this gleaming new concept (complete with requisite Apple store) will provide an interesting dichotomy to the old city. 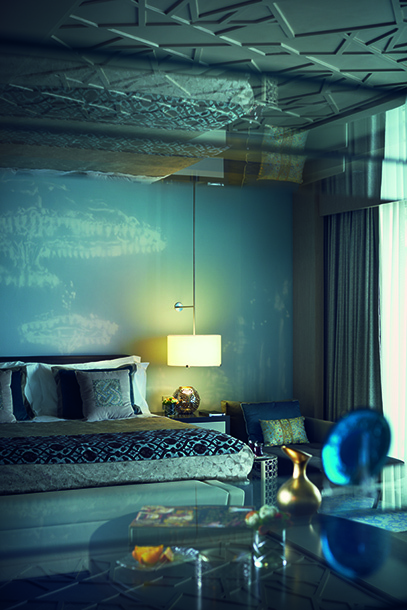 Raffles is emblematic of the new Istanbul. This large hotel (132 guest rooms and 49 suites) is so fancy that it even has a heated heliport on the roof, in case you really don’t want to deal with the city traffic. There will be an open-air rooftop movie theater by next summer. An indoor pool offers the perfect place to relax in the winter—the design uses skylights to let in natural light so you feel like you’re outside. There are private hammams if you want to experience a real Turkish bath without the discomfort of sharing with others. The lobby offers a jaw-dropping welcome. When I arrived, a live harp player was on duty and plenty of staff were on hand to ensure that guests never had to wait.

Although there are many dining options just next door at the Zorlu Center, Raffles holds its own. The hotel’s Long Bar mixes up inventive drinks, served with complementary bar snacks that go way beyond stale peanuts (think spicy beetroot crisps). Pair them with one of the bar’s signature cocktails, such as the Stamboul Sling, a play on the Singapore Sling. The Raffles breakfast is also not to be missed. It’s a buffet that looks like something out of a culinary magazine, with the option of hot dishes cooked to order (try the omelet, paired with asparagus and roasted potatoes—you won’t regret it). The hotel opened in September 2014.

Its rooms are massive: The most basic rooms start at 645 square feet, and suites stretch up to more than 3,700 square feet. Modern is the key word here: Think touch-screen panels located by the bed so that you can open and close the curtains, set the temperature, and dim the lights in your bathroom, all with the swipe of a button.

All rooms come with 24-hour butler service, and each room has an individual design theme that ties back to the city itself. Everything from the lobby to the art inside the elevators features touches of Istanbul’s classic sites. The rooms have artwork inspired by the chandeliers of the Blue Mosque. 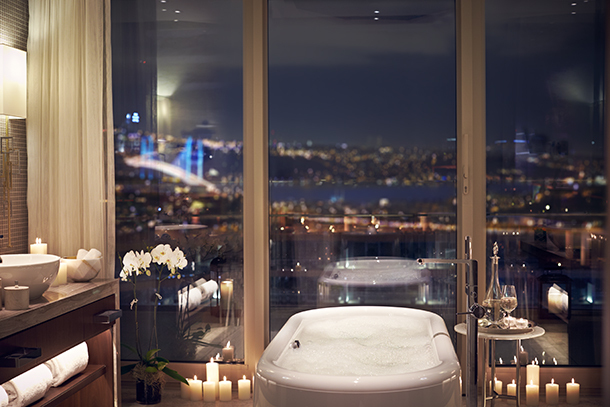 The location adds to the appeal, as the hotel sits atop a hill, making the views from the higher floors even more spectacular, especially from your private balcony. You can see all the way across the water to the Asian side.

Istanbul deserves to be explored fully, so take our advice and visit each of its distinct areas.