On our first day in Antarctica, we rescued a shipwrecked yacht, and things only got more exciting from there.

The morning dawned bluebird bright and the scene looked orchestrated. Cue the penguins porpoising just below. Enter diving whales, stage right. Set it all against a backdrop of the most beautiful golden light you’ve ever seen. If it were a movie set, it would be too perfect, too over-the-top. But that’s Antarctica for you. The natural reality is better than anything humanity could design.

Antarctica makes you feel small, and humbled, and incredibly lucky to be here at all. The climate can be harsh and unforgiving, and heart-breakingly beautiful at the same time. The land and the ice in Antarctica have been here for millions of years before I was born, and will be here for millions more after I’m gone.

Our boat is old too, and has already lived many lives. Around since the 1980s, the Ocean Atlantic has been a Russian spy ship, car ferry, rumored private charter for Vladimir Putin, floating bordello, casino, and, most recently, our newly refurbished expedition ship chartered by Chimu Adventures for its 10 Day Discover Antarctica cruise. In an increasingly disposable modern world, the Ocean Atlantic keeps making itself useful.

The thing about Antarctica is it makes you throw away your plans and gifts you with a better one. Not many Antarctica cruises pass by Melchior Island, but the Ocean Atlantic had stopped there for an excursion, where we discovered the stranded yacht, and added three more guests on to our cruise.

If we hadn’t stopped to help, we never would have shared a delicate, golden sunset with thousands of tiny penguins on Danco Island. If there had been enough snow to go snowshoeing as planned, I never would have gotten to kayak through Antarctic waters and witness a seal surprise itself as it rolled off an iceberg and belly-flopped into the ocean. If our Zodiac group hadn’t voted to speed around the entire Half Moon Island, we never would have had the chance to see a rare white fur seal play-fighting with ordinary gray ones.

On the white continent, you’re at the mercy of the weather. The daily itinerary is announced in hopeful terms. “We plan to … ” “We hope to … ” Never “we will.” Before I left, that’s also how I talked about my Antarctica trip, as if speaking the words I’d dreamed of for so long: “I’m going to Antarctica” would somehow pop the magic bubble and something would jinx the trip, keeping it as just a wish.

I didn’t think anything could top our first day in Antarctica. Waking up to icebergs outside my porthole feeling incredibly alive as we raced around Melchior Island in Zodiacs, the crisp and pristine air nipping at my face as if to say: You’ve arrived. Feel it. Try to take it all in as the day rushes by all too quickly. Hold onto each rare moment tightly, knowing that you’ll never have this precious time again.

Sitting on the top deck, basking in the rare Antarctic sunshine and watching the cloudless sky slip by, I thought for sure the trip had peaked here.

And then came the second day. I had barely woken up, and then I was at Port Lockroy, where curious penguins waddled over to nibble my ski pants to see if they were worth eating. Afraid to move or breathe and break the moment, I nearly cried with happiness over being near these adorable animals in their natural habitat.

Back on the boat, sailing through the Lemaire Channel. This narrow section of water is often too ice-choked for ships to traverse, but on this day, conditions were good and our captain was confident that we would be the second ship to make it through in the past few months.

Our vessel was the only man-made thing in sight. On the Lemaire Channel, 3,000-foot mountains tower on each side of the ship, looking close enough to touch. I had to crane my neck back to see the summits, jaggedly piercing the clear blue sky above. Pristine white snow spilled down the sides, collecting in icy-blue glaciers leading to the water.

Wandering albatrosses with their elegantly long wingspan swooped around our boat, and every so often, a minke whale would surface in the waters below, giving us just a glimpse of its tail or offering us a blow from its spout. Penguins swarmed in formation just off our bow, jumping in and out of the water in a graceful show diametrically opposed to their clumsily cute waddles on land.

In the afternoon, we reached Pleneau Bay, the “iceberg graveyard” where all the glacial chunks collected, like a museum of expertly curated natural beauty. These glaciers had birthed massive icebergs, the site of which anywhere else in the world would be singularly awe-inspiring; but here, they were more common than the penguins. I discovered a new shade of blue every time a new one went by. How could today be anything but the best day of the trip?

And then came day three. A quick Zodiac ride from the Ocean Atlantic, swinging my legs over the big rubber sides, splashing through the water, climbing over the rocks, and I was finally setting foot on continental Antarctica. (Our earlier stops on the voyage had been Antarctic islands.) After dreaming of this for so long, I was flooded with joy to be standing here on this remote continent. Throaty cries of penguins trumpeted a congratulations and welcomed me on shore. 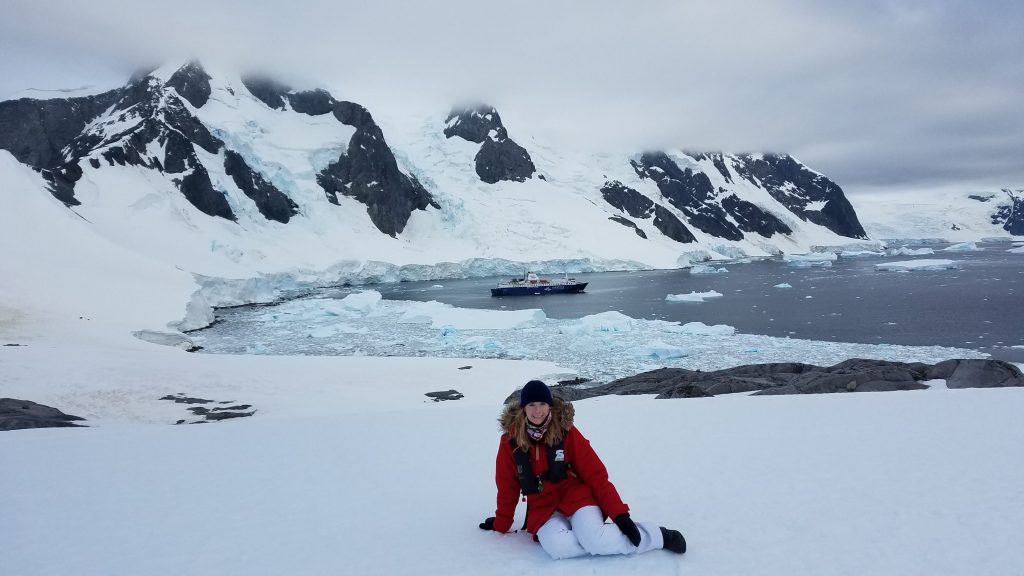 A short walk up a steep hill, and a staggeringly beautiful Antarctica scene spilled out before us. Starched-white, pillowy snow framed a bay of clear blue water studded with fluorescent blue icebergs. Mountains beyond the bay reached up to the cloudy sky, and both were infinitely reflected on the surface of the mirror-like water.

A slippery hike up a bigger, snowy hill gave us even better views. The penguins looked like tiny black dots and our boat looked like a toy off in the distance. I sat in the snow and took in all the elation and thankfulness of being here in this moment.

All too soon, it was time to head down. But I’d go the fun way. I got a running start and sledded down the bumpy track carved out by those who had slid before me. Crisp and clean Antarctic wind rushing past my face, the continent beneath me, until I landed laughing in a graceless heap at the bottom of the hill.

The water in Antarctica is incredibly pure and unspoiled. For the last week, we’d been surrounded by the inescapable ocean. You start to imagine jumping in, and today, we’d get the chance. The French call it “l’appel du vide” (“the call of the void”). That strange longing to throw yourself off a cruise ship into the waters below, even though you don’t want to die—you just want to feel what the fall would be like.

The polar plunge was held just off the coast of the continent, in the calm waters of Neko Harbor. The waters may look bath-like, but the temperatures were not. Icebergs could be seen bobbing in the distance. An orca whale and a leopard seal had been spotted hanging around. The water temperature was 35 degrees, and the air temperature was 33.  Barefoot, bathrobe-clad guests lined up in the mudroom, where normally, we’re bundling up in as many layers as possible before putting on our jackets and boots and boarding the Zodiacs. Today, we’d be hurling ourselves off the gangway and into Southern Ocean.

Seventy brave cruisers were lined up, buzzing with nervous excitement. As I got closer to the watery exit, the cold air crept in, curling up around my feet and under my robe, making me reconsider my plans for a swim. The crew fastened a belt and rope around my waist, already wet and frigid from the plungers before me. At least if I literally froze upon entry, they’d be able to fish me out quickly. My body went into autopilot. The crew guided me to the gangway and told me to give a wave to the parka-wearing spectators on the top deck. There was nothing left to do but freeze on the landing in indecision or quickly fling myself off the ship. I plunged down into the depths of the clear blue water and surfaced, surprised that the shock of the water wasn’t nearly as bad as I was expecting. Temporarily numbed, I managed to enjoy a moment or two of paddling in Antarctic waters before making a beeline for the ladder back to the warmth of the ship. The adrenaline kicked in and I was greeted with a towel, robe, and congratulations from the crew. Judging from the post-plunge photos of my star jump, it was probably for the best that I forgot to check my scores from the judges out on the Zodiac, who were raising paddles marked on a 1-10 scale.

The elation and excitement of the accomplishment overwhelmed any feelings of shivering cold. It was by far the best day of the trip … until tomorrow.

Caroline Morse Teel was hosted by Chimu Adventures on their Discover Antarctica Cruise. Follow her on Instagram @TravelWithCaroline for more photos from her trip.