After 20 years working in the travel industry, and 15 years writing about it, Tim Winship knows a thing or two about travel. Follow him on Twitter @twinship.

Is premium-class service on U.S. transcon flights on the verge of reinvention?

On June 15, JetBlue will launch its long-anticipated Mint service with a single daily A321 flight between New York and Los Angeles. What will distinguish the new service is its singular combination of business-class seating and affordable pricing. Here’s the value proposition, as described in a promotional email from JetBlue:

Sit back—all the way back—and relax! Mint is JetBlue’s refreshing take on a premium transcontinental experience—it’s top-notch service and stylish seats without the curtain and four-digit fares you might find on other airlines. With Mint’s fully lie-flat seats, fresh dining options and revitalizing amenities, we’re certain you’ll be kept in mint condition.

The price? Between $599 and $999, each way. For comparison, business-class fares on American’s New York-Los Angeles flights ranged from $1,384 to $2,972. And first-class fares were considerably higher. Here’s a look: 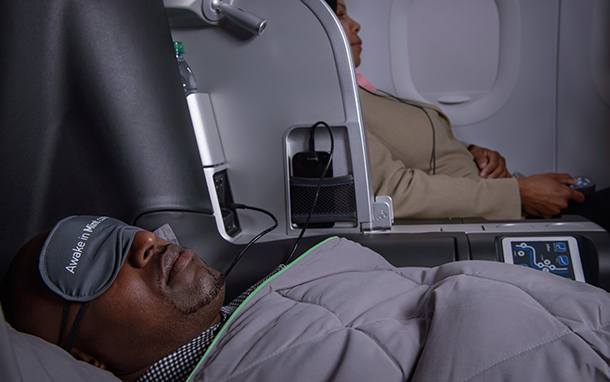 Since its founding in 1999, JetBlue has staked out a place for itself midway between the no-frills low-cost carriers and the legacy full-service airlines. Prices are good, if rarely rock bottom. And although the airline has had no first class and lacks an extensive network of airport lounges, its coach seating boasts more legroom than most other carriers, and its live TV inflight entertainment was brag-worthy.

Although the airline enjoys fierce loyalty among certain flyers, it was never going to be all things to all people. And competition has eroded its initial advantages. The full-service airlines have consolidated and streamlined, undermining JetBlue’s cost advantage and ability to price-compete. And the “new and innovative” mantle JetBlue once owned has been largely usurped by Virgin America.

Mint, then, is both eminently sensible and very risky. When the new service is fully in place, it will be available on JetBlue’s flights between New York and both Los Angeles and San Francisco (beginning on October 26). The fleet of 11 dedicated A321s will feature premium cabins outfitted with 16 lie-flat seats. Twelve of the seats will be side-by-side; four will be single seats in “private suites.” Naturally, the cushy seats are complemented by upgraded meal service, amenity kits, and other front-cabin niceties as well. (Although I’m referring to Mint as a business-class product, it could be argued that it’s comparable to first class, especially if it’s one of the suite seats.)

The risk is that JetBlue could disenfranchise its loyal coach-class customers. To accommodate the bigger seats up front, the airline will be putting the squeeze on passengers in coach and Even More Legroom seats, trimming an inch of pitch from both of those seating configurations. JetBlue claims that its new slimline seats allow for closer spacing with no loss of legroom, but it remains to be seen whether that squares with flyers’ seat-of-the-pants experience.

Whatever happens in coach, if JetBlue’s Mint pricing continues to severely undercut prices for comparable transcon service from American, Delta, and United, we could be on the brink of a new era of affordable premium-class airfares on one of the country’s most-contested air routes.

Reader Reality Check Would you pay $599 each way to fly in JetBlue’s new Mint cabin? This article originally appeared on FrequentFlier.com.