Many travel-hungry nomads will take whatever time they can get in a new city. One night in Amsterdam between European destinations? Sure. Twelve hours in Buenos Aires on a layover? Absolutely.

But that flexibility falters when it comes to huge cities. For example, London.

I recently jumped at a last-minute opportunity to spend a full weekend in the British capital, and after the excitement of a freshly-booked flight faded, I realized: It’s impossible to see all that’s worth seeing in just three days. Not to mention on a budget.

So I changed my approach. I decided to think of this as a first trip of many, on which I could only scratch the surface of London. I found that the best way to visit a massive city of 8 million people and countless sites in just a weekend was best accomplished by mixing some of the more authentic, lesser-known spots with a few of the bigger tourist attractions. I knew that a marathon of long lines and sky-high ticket prices was sure to turn me off from a city that has so much more to offer, so I opted for free and low-price attractions (of which there are many) and spots that came locally recommended.

Here’s how I introduced myself to Britain’s capital in three days. 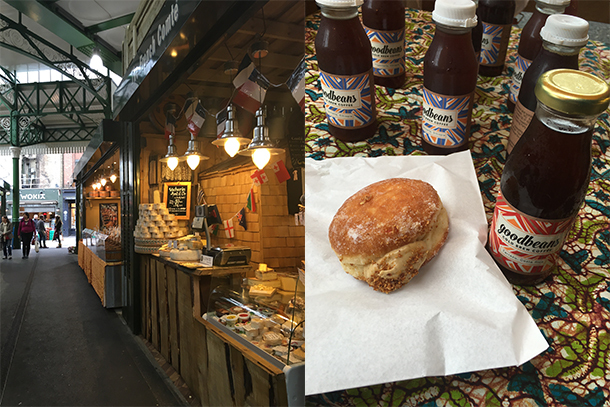 Starting my adventure on a weekday (Friday) was convenient, since I had a lot of touristy sites to see. It’s wise to prioritize popular attractions for weekdays, as the biggest crowds will be out in force on weekends.

I started at Borough Market, where Southwark’s open-air array of vendors serve up local cheeses and meats, imported oils and herbs, pastries, sandwiches, seafood, and so much more. Arrive hungry and taste flavors from all around the world in a centrally-located, 4.5-acre space. The market has existed as a trading and commerce spot since the 11th century, and is now home to over 100 vendors, offering everything from proper fish and chips to Croatian delicacies and Indian food.

I then took the short walk to the nearby Tate Modern museum for a chance to be cultured without the cash. The museum is free, with a small donation recommended, and offers a picturesque view of the Thames River and Millennium Bridge. In addition to its seven floors of modern art and dining spaces, a new three-story wing is opening in July 2016. Pay to see one of the visiting exhibitions like The World Goes Pop, wander the minimalist galleries to spot Picasso and Kandinsky pieces, and enjoy tea at the museum’s cafe. 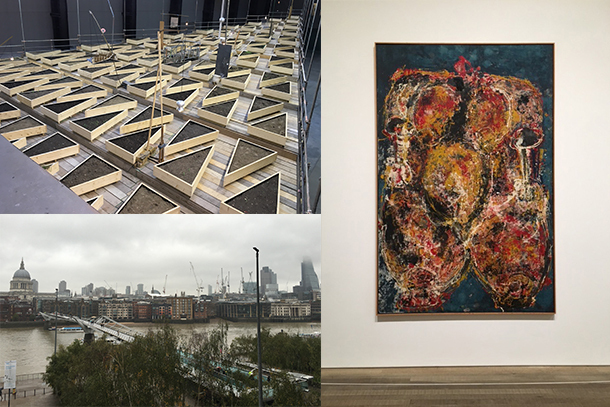 London is home to many centuries of history, but South London is relatively new to tourism. Just a few hundred years ago, locals and visitors alike avoided anything south of the Thames because the South Bank was home to smelly factories and unsavory neighborhoods. Fast forward to the post-war modernist movement, the Tate Modern’s emergence in 2000, and the Shard popping up about a decade later—South London is now a hub of art, entertainment, and commerce. While the neighborhood’s modern and minimalist architecture may not quite feel like the London you see on postcards, a short walk north to the Globe Theater on the Thames can change that.

Shakespeare’s Globe burned down during a 1613 performance of Henry VIII, but a fully functioning replica theater next door to the Tate Modern and steps from the Globe’s original Southwark location can take you back in time—if you can get your hands on tickets. The performances often sell out months in advance, but just seeing the original site and the replica are sure to exhilarate any Shakespeare fanatic or history buff. Passersby can enter part of the Globe’s grounds, and I hung around long enough to get a peek into the playhouse as a crowd exited a production. I’m saving for an actual show on my next London trip. 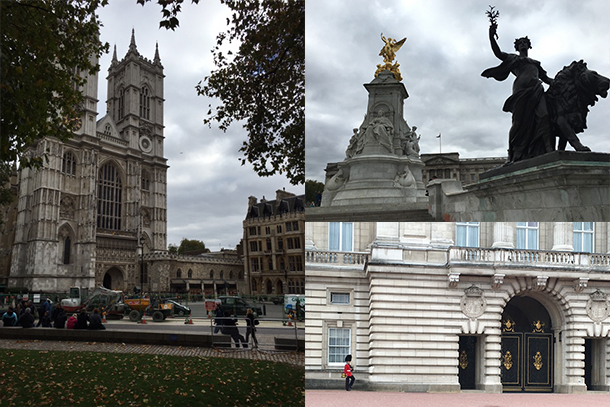 The key to seeing as much of London as possible is the Tube—the city’s metro system. Hopping on public transit from the Globe will be the easiest way to get to the city’s hat trick of infamous tourist sites: Buckingham Palace, Westminster Abbey, and the Houses of Parliament (best known as home to Big Ben). Take in Buckingham Palace’s architecture and iconic guards before strolling Birdcage Walk—a scenic route lined by gardens, ducks, and swans—to Westminster Abbey. You can tour the infamous, 925-year-old church, which is also the resting place of some of Britain’s biggest names (read: Queen Elizabeth I, Charles Darwin, Mary Queen of Scots), and hear Big Ben ring out on the hour. Before leaving, snap a photo at one of the red phone boxes on St. George Street. They’re back-dropped by the enormous clock tower and passing double-decker busses, making for the ultimate London photo-op.

Next, take the tube to Covent Garden, a shopping and restaurant hub near Piccadilly Circus—the Times Square of London—that’s ideal for souvenir browsing (see Whittard’s for all your tea and hot chocolate needs).

This area is perfect for late-night entertainment. In nearby Leicester Square you’re likely to find comedy club promoters passing out flyers for discounts on show tickets and drink specials. Relaxing and laughing at a dark basement show is the perfect way to cap off the day. 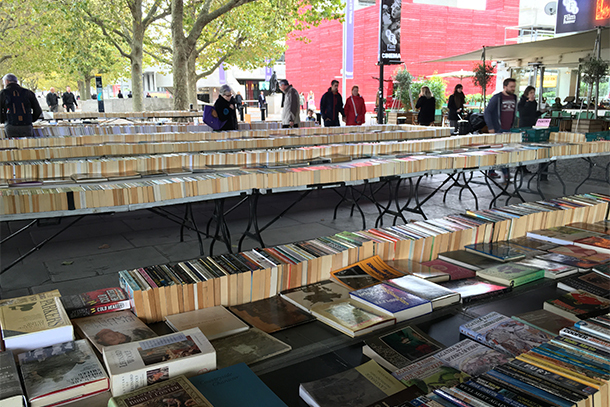 While taking a walk along the Thames is a great way to see the Globe, London Bridge, the Tower of London, and Tower Bridge, it’s also ideal for taking in some smaller spots, like the Southbank Book Market. I stumbled upon it on my way along the Thames one morning, and became caught up in a treasure hunt through used novels and comics, as well as handmade prints, and postcards. Continuing along the Thames you’ll find a skate park, stunning pieces of street art, buskers (street-performers), and restaurants overlooking the water. Exploring this area is a great way to take in impromptu charms, like this Millennium Bridge street performer:

But the best way to see all of London in such little time is to get high. No, not like that.

Head to one of London’s tallest perches to truly see the entire city in as little time as possible. While the View from the Shard is the highest observation deck in the city, it’s also extremely pricey—£25, (about $37 U.S. dollars; see XE.com for current exchange rates). A spot on the London Eye is similarly expensive. But it is possible to get great view of the Thames for free. Peer out of the sky-scraping Walkie Talkie building for free with a reservation to visit the Sky Garden.

The Sky Garden at 20 Fenchurch (better known as the Walkie Talkie for its wonky shape) offers spectacular views of London’s center from its indoor garden, outdoor observation deck, cafe, and restaurants. Reservations to get upstairs are required and can be made online—but again, they’re free, and you’re not required to dine or drink anything. Time your visit depending on whether you prefer a daytime or night experience, but know that both will include a breathtaking view as long as heavy clouds stay away. 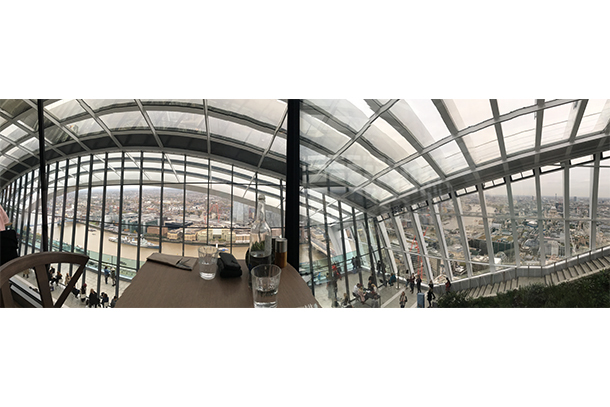 Want to mix a great view with an adrenaline rush? Across town, Up at the O2 offers a chance to fit some adventure travel into an otherwise urban trip, but is beginner-friendly and great for most ages. Tickets are £28 and include a climb suit, sneakers, and a locker, so you won’t don’t have to dress prepared for the activity. You’ll be attached to a cable stretching over the building’s towering dome and guided up a stable—albeit steep at times—walkway over the roof, with a ten-minute pit stop at the peak for an educational observation deck experience. 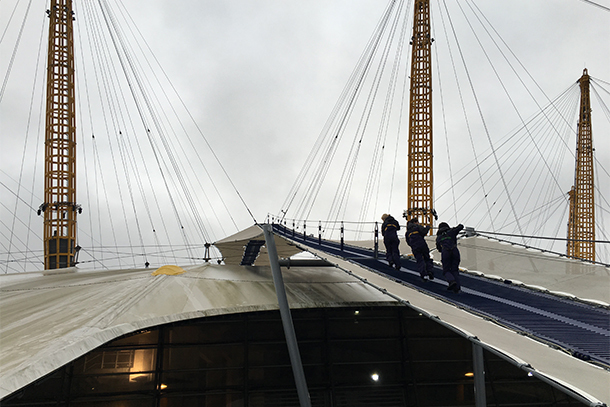 If adventure travel and indoor gardens aren’t your cup of tea, however, try dining at the UK’s highest restaurant, Duck and Waffle. This chic spot—named for one of its best dishes—is open 24/7 and sits on an even higher floor than any of the restaurants in the Shard. Try to get a reservation around sunset to beat the dinner rush and see the city both during daylight and all lit up at night.

After you’ve seen the British capital in all its glory, head to another free museum to see some of the world’s most celebrated artworks. The National Gallery in Trafalgar Square is free of charge and houses timeless icons like Claude Monet’s Water-Lilies, Jan van Eyck’s Arnolfini Portrait, and Vincent Van Gogh’s Sunflowers. Outside, Trafalgar Square often hosts public events like the Rugby World Cup viewing that was being held during my visit.

RELATED: 10 Classic Cocktails You Can Make on the Plane

Saturday night is also an ideal time to taste one of London’s trademark flavors—gin. If you don’t make it to one of the many distilleries for a tour and tasting during the day (City of London Distillery, Beefeater, London Distillery Company, Sipsmith), you can still drink gin as Londoners do … with the right bartender. Head to the Hilton London Bankside’s restaurant and lounge, Distillery, to learn about gin and gin drinks from bartender Ricky Wing. Ask what a gin fizz is and he’ll dive into its Prohibition-era roots as he makes you one, or go for a Queen Elizabeth II for some British history and egg whites to end your night. 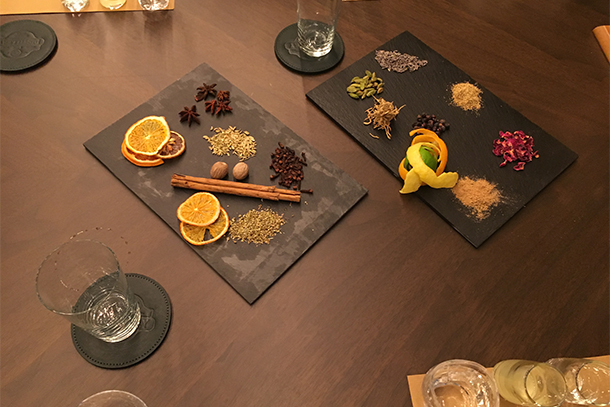 After two-thirds of a weekend in bustling London, Sunday is for slowing down. The Tube opens later, so don’t bother flying out early. 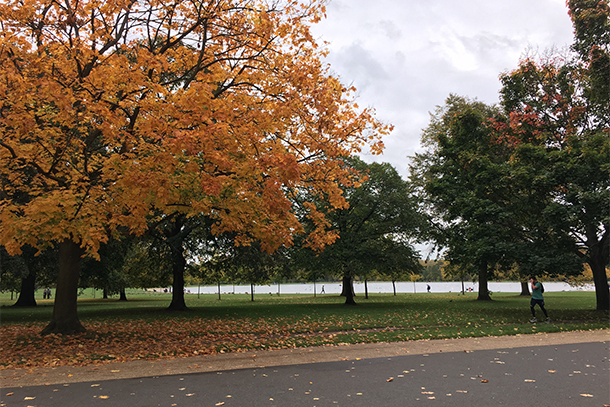 Instead stay for some down time in a gorgeous park like Kensington Gardens, home to the royal palace of Prince William and the Duchess of Cambridge. Sunday is also a good time to break for afternoon tea, which will fill you up with enough pastries and finger sandwiches to make up for the bad plane food on the flight home.

Take advantage of any spare Sunday hours to fit in one last site or explore a neighborhood. What London lacks in walkability it makes up for with an adventure around each and every corner. There’s something unique in every nook of this city, and wandering the centuries-old streets is the only way to find them.

Associate Editor Shannon McMahon visited London courtesy of the Hilton London Bankside Hotel. McMahon is a former news reporter who’s lived in Spain and is always planning her next trip. Follow her travels on twitter @shanmcmahon_ or on Instagram @shanmcmahon.