Briggs joined SmarterTravel in 2012 and became a member of the editorial team in 2015. She has lived in Ireland and has worked in the hospitality, tourism, and online travel industries for more than a decade. She loves scoping out new hotels, promoting unfamiliar destinations, and writing about niche travel topics.

The Handy Item I Always Pack: "The Baggallini Zipper Cross-Body Travel Bag. This is a great travel bag because it's small, compact, has many compartments, and can be worn across your body for added security."

Ultimate Bucket List Experience: "Snowboarding through the Alps and staying in a chalet overlooking the mountains."

International travel has been rising steadily for the past six years, and 2015 was no exception. A record-breaking 1.2 billion travelers spent at least one night in an international destination last year—that’s 50 million more than in 2014, or a 4.4 percent increase—according to the United Nations World Tourism Organization (UNWTO), which initially predicted only a three to four percent growth in 2015.

RELATED: 6 Countries That Rely on Tourism (and Why That’s Good for Your Wallet)

The top regions visited last year were Europe, Asia-Pacific, and the Americas—all of which received about a five percent year-over-year increase in tourism. Europe led with 609 million visits (a 29 million increase from 2014) while a reported 13 million more people traveled to Asia and the Pacific last year than in 2014. Additionally, the Americas saw an increase of nine million visitors from the year before.

Arrivals to the Middle East increased by three percent, while Africa saw a three percent decrease.The most popular destinations visited in 2015 were France, followed by the United States, Spain, and China. 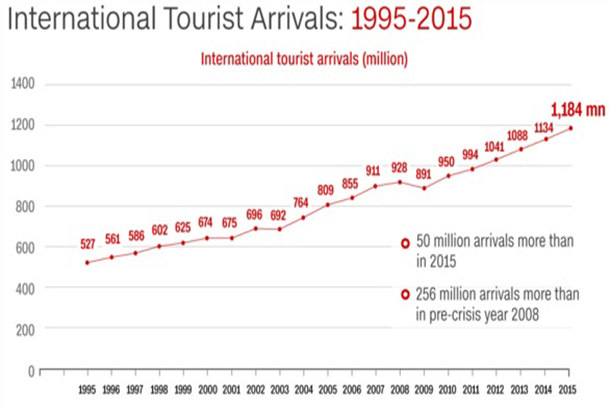 “2015 results were influenced by exchange rates, oil prices, and natural and manmade crises in many parts of the world,” says UNWTO Secretary-General Taleb Rifai in a press release.

While the U.N. is predicting that 2016 will have the lowest growth rate since 2009, global travel is expected to be steady with a four percent growth this year.

RELATED: 5 Awful Trends That Should Worry You in 2016

In the long-term, the UNWTO predicts that international tourism will average roughly a 3.3 percent increase and that by 2030 we can expect a whopping 1.8 billion people to be traveling outside of their home country.