Lately, I’ve really been enjoying what I consider to be the “second cities” of Europe, such as Naples in Italy, Marseille in France, and Hamburg in Germany. These places often have a rough, Industrial Age heritage and a rust-belt vibe that keeps them honest, unvarnished, and nonconformist. Even though Glasgow is Scotland’s largest and most populated city, I consider it to be that country’s second city behind Edinburgh, which wins first place for its capital status and tourism appeal.

A century ago, Glasgow was one of Europe’s biggest cities, an industrial powerhouse producing 25 percent of the world’s oceangoing ships, but in the mid-20th century, tough times hit the city, giving it a run-down feel. Today Glasgow is on the rise again. Its flair for art and unpretentious friendliness make it more popular than ever to visit.

You can sense Glasgow’s wonderful energy on its streets and squares. At the heart of the city is George Square, decorated with a Who’s Who of statues depicting great Scots, from Sir Walter Scott to James Watt, who perfected the steam engine that helped power Europe into the Industrial Age.

Nearby is Buchanan Street, part of a pedestrian shopping zone called the Golden Zed (Brit-speak for “Z,” named for the way it zigzags through town). Glaswegians also refer to this district (with the top shops in town) as the Style Mile. It’s a delight to just stroll up this street—listening to buskers, enjoying the people-watching, and remembering to look up at the architecture above the modern storefronts.

It’s also worth meandering through the Style Mile’s alleys, which are filled with huge, fun, and edgy murals. Rather than letting graffiti artists mess up the place with random or angry tagging, the city has given top street artists entire walls to paint. These murals are almost sightseeing destinations in themselves. 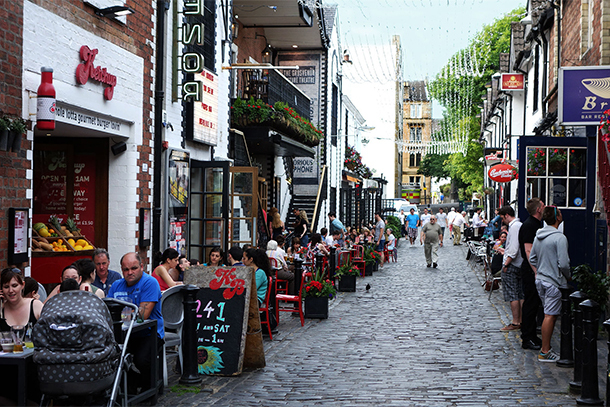 Glasgow’s artsy vibe can also be seen in its architecture. During the late 1800s and early 1900s, Glasgow-born architect Charles Rennie Mackintosh brought an exuberant Art Nouveau influence to this otherwise practical, working-class city. Travelers can enjoy his work (and a meal) at the Willow Tea Rooms, a delightful black-and-white space that Mackintosh designed right down to the furniture, lighting, and cutlery. But his crowning achievement is the Glasgow School of Art. Still a working school, it’s only viewable via a guided tour. From a fireplace that looks like a kimono to the remarkable forest-like library to windows that soar for multiple stories, the building is an Art Nouveau original.

Near the Glasgow School of Art is the Tenement House, a perfectly preserved 1930s-era middle-class residence. This typical row home was owned by Miss Agnes Toward, who for five decades kept her home essentially unchanged. The kitchen calendar remains set for 1935, and canisters of licorice powder (a laxative) still sit on the bathroom shelf.

Two excellent museums are worth the trek away from the city center. Housed in a grand, 100-year-old Spanish Baroque-style building, the Kelvingrove is like a Scottish Smithsonian, with everything from a stuffed elephant to fine artwork by the great masters. The Riverside Museum focuses on transportation, featuring stagecoaches, locomotives, a recreation of a circa-1900 street, and a shipping exhibit that commemorates Glasgow’s shipbuilding era.

At night, I enjoy the hip, lively West End district, including the fun eateries and bars lining Ashton Lane. A great place to end a West End evening is at Oran Mor, featuring an atmospheric bar, an outdoor beer garden, and a brasserie in a converted 1862 church (the former nave is decorated with funky murals). Downstairs, there’s a nightclub with everything from rock shows to traditional Scottish music nights.

Despite recent improvements, there is still a rough-and-tumble side to Glasgow, and locals seem to come in two stripes: those who live to drink beer and cheer their soccer team, and those who are hardworking, cosmopolitan, and cultured (even though they don’t sound like they are, given their hard Glaswegian accent). If you venture into a rough neighborhood after dark—as I did one night—it seems the entire world is populated by angry people with dead-end lives. Crammed into bars, they leer at passersby who don’t want to join the mosh pit. But the next morning, with the sunshine comes a world of that second type of Glaswegian: people with a vision for renewing Glasgow.

Edinburgh may have the royal aura, but I find Glasgow’s down-to-earth appeal captivating. One Glaswegian told me, “The people of Glasgow have a better time at a funeral than the people of Edinburgh have at a wedding.” In Glasgow, there’s no upper-crust history, and no one puts on airs. In this revitalized city, friendly locals do their best to introduce you to the fun-loving, laid-back Glaswegian way of life.