Sarkis joined SmarterTravel in 2003. She's always on the lookout for authentic local experiences and her next great meal. She loves discovering new destinations, predicting trends, and turning amazing travel experiences into inspiring stories.

Her stories have also appeared online at USA Today, Conde Nast Traveler, Yahoo! Travel, Huffington Post, Business Insider, and other publications. Her work has also been published in Spain from a Backpack and The Best Women's Travel Writing 2008. She is currently working on a travel memoir.

The Handy Item I Always Pack: The J Pillow Travel Pillow. It's a bit bulky and noticeably phallic, but it's the best inflight sleep aid I've ever found.

I recently wore a Blynk camera, a wearable hands-free camera that makes little time lapse movies by taking one picture per second for up to 16 hours (or one picture every five seconds for up to 56 hours), on an afternoon exploring Tokyo. After reviewing the footage I captured wearing the camera on my jacket lapel while taking the subway, exploring the backstreets of the Omote-sando neighborhood, and visiting the nearby Meiji Shrine, I came up with this short-list of things to do and not to do:

Be doing something interesting: Exploring a neighborhood, taking the subway; these are definitely interesting things while you’re doing them, but documenting these activities at a one-image-per-second rate can yield some pretty dull results. Instead, use the camera to capture an exciting event or something with a beginning, middle, and end. You’re capturing real life, yes, but real life is so much more interesting to replay when you can tell a story. 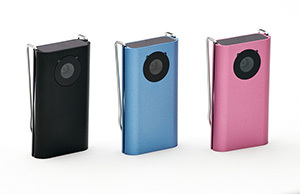 Get the angle exactly right: You can clip the Blynk to your clothing, belt, bag, or anything else, which seems great. But the truth is, unless your angle is exactly right, you’re going to end up with hundreds or thousands of pictures all taken at a funny tilt. Not only do you want the angle to be right, but you’ll need to pay attention to the height as well. Because, for instance, a belt-eye-view of a fire-dancing festival is only going to capture half the action.

Walk in front: Unless you want to film the back of someone’s head, you’re going to need to make sure you’re positioned to allow the camera the most interesting view all the time. Similarly, if you’re talking to someone but there is interesting stuff going on around you, you may have to orient your body, or at least the camera, away from your conversation.