Though Frankfurt is often avoided by tourists (who use only the city’s airport), its modern energy makes it a unique, entertaining city. Linking the wine-and-castles stretch of the Rhine to the north with the fairy-tale Romantic Road to the south, Frankfurt is just a 12-minute train ride from its airport, and even a two- or three-hour visit can make a powerful impression.

You can get a feel for Frankfurt’s Jewish history with a visit to the Holocaust Memorial, at the site of the old Jewish ghetto, where the city’s main synagogue once stood. Commemorating 12,000 murdered Jews, it’s a moving and evocative collection of images. Around the cemetery is the Wall of Names, with a tiny tombstone for each Frankfurt Jew deported and murdered. This gives each victim the dignity of being named; a data bank inside the adjacent museum holds everything known about each person to keep his or her memory alive. The pebbles atop each tomb represent Jewish prayers.

While Frankfurt, bombed mightily in World War II, is low on Old World charm, this trade and banking capital offers a good look at today’s no-nonsense Germany. Ever since the early Middle Ages, when, as its name hints, Frankfurt was a good place to ford (-furt) the river, people have gathered here to trade. Frankfurt, a pragmatic city, makes decisions based on what’s good for business. Destroyed by WWII bombs? Take it as an opportunity to rebuild better than ever for commerce.

With its forest of skyscrapers perched on the banks of the Main River, Frankfurt has been dubbed Germany’s “Mainhattan.” The city leads the country in high-rises (mostly bank headquarters), and you can’t help but notice the striking architecture.

For a commanding view over the whole cityscape, take an ear-popping elevator ride up to the 54th floor of the Main Tower—the skyscraper with the red-and-white candy cane on top. For about $10, you can enjoy the best (and only public) city viewpoint from the top of a skyscraper, 650 feet above the city. (For a cheaper—but still grand—city view, nurse a drink on the Galeria Kaufhof department store’s rooftop.) Looking down, you can see the city’s vast green spaces arcing out from the river and the city’s huge convention center—the size of 40 soccer fields.

With all the businessmen coming into town, there’s no way to outlaw prostitution. The city takes a compassionate and seemingly effective “harm reduction” approach to this challenge. A couple of blocks from Frankfurt’s train station is a row of five-story “eros towers,” where the city has decided to contain and control prostitution (perfectly legal since 2002). Within about a block of this “tolerance area” are about 20 of these brothels in original late-19th-century apartment flats.

The sex workers here, mostly from Eastern Europe, Latin America, and Thailand (and only about 2 percent German), essentially run their own businesses. They get health care and pay taxes (on an estimated €14 billion of declared income each year). As I marveled the poignant sight of high-rise banks and office buildings towering above Frankfurt’s brothels on my last visit, my guide said, “Prostitutes, who pay about €130 a day to rent their rooms, cover their rent by the end of the businessmen’s lunch break.”

Frankfurt’s pragmatism extends to drug use as well. The city’s “pump rooms” provide hard-drug users with clean needles, medical help, and a place to stay if needed. They’re strictly not for first-time users, and no dealing or sharing of drugs is allowed. Two decades later, overdose deaths are down 75 percent, and there’s never been a death in a “drug consumption room.” 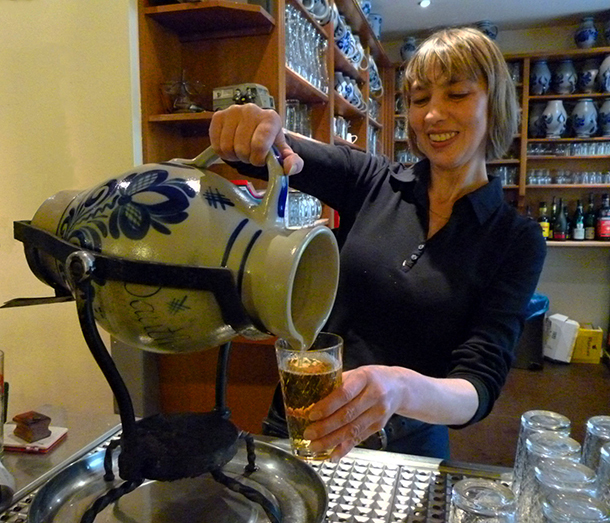 If visiting Frankfurt, you’ll notice apple-wine pubs. Instead of beer, the city tries to entice visitors with this unusual drink. It’s about the strength of beer (5.5 percent alcohol), and can be served spiced and warm in winter. You’ll see locals, who’ve spent a lifetime learning to like it, grasping their apple wine in characteristic hatched glasses (which go back to its early days, when the hatching helped greasy-fingered sausage munchers keep a grip on this this tax-free drink).

Locals line up for sausage sandwiches in Frankfurt’s wonderful Kleinmarkthalle, an old-school market hall that was saved from developers by popular demand. The culinary pride of Frankfurt is Grüne Sosse, a green sauce made of sour cream blended with seven herbs, frequently served with beef, schnitzel, or hard-boiled eggs. You can also satisfy your craving for leiterchen here (“mini-ladders,” or spare ribs—surprisingly meaty and salty).

From slick, modern skyscrapers to junkie cafes, nouveau German cuisine to old-fashioned wurst, Frankfurt is a city of paradoxes. While most pass through, those who visit will find it time well spent.