My guide Roberto met me at Madrid’s airport, we rented a car, and minutes later, we were southbound on the freeway, immersed in the vastness of La Mancha. It’s a tough terrain. A windmill—weathered into a rough little useless nub—still capped its blustery hill.

We popped into a rustic truck stop for lunch. As I leaned into my ham sandwich, my traveling spirit did a little leap and I thought, yes, España! My passport had been stamped, but I hadn’t really arrived until that moment, when my teeth broke through the crisp crust of my fluffy fresh baguette … and hit jamón.

That ham, dry-cured and aged from happy, acorn-fed pigs, is an example of the rustic intensity of the Spanish culture. Cured ham hocks—toned legs with pointed toes—are found in every bar. Like connoisseurs of fine wine, Spaniards debate the merits of different breeds of pigs, their diets, and the quality of the curing. In Spain, jamón is more than a food; it’s a way of life. Spaniards treasure memories of Grandpa during Christmas, thinly carving a ham supported in a jamonero (ham-hock holder), just as we prize the turkey carving at Thanksgiving. To sample this delicacy without the high price tag you’ll find in restaurants, go to the local market and ask for 100 grams of top-quality ham; enjoy it as a picnic with red wine and a baguette. 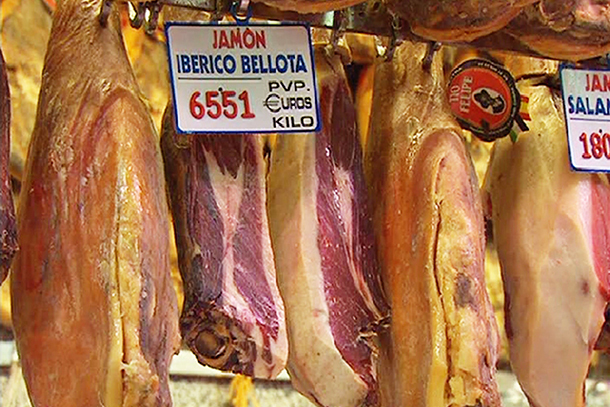 To complement all that ham, 700 years of no-pork Muslim rule left its mark on the Spanish cuisine. The Moors, who were great horticulturists, introduced new herbs and spices. The Moorish legacy is well represented by one of Spain’s best-known dishes, paella, combining the traditional Middle Eastern flavor of saffron with rice and seafood, sausage, and chicken.

Every region of Spain has specialties worth savoring. In Catalunya, there’s fideuá, a thin, flavor-infused noodle served with seafood, and arròs negre, black rice cooked in squid ink. Along the North Atlantic, Asturias combines seafood with hearty mountain grub, including giant white fava beans and the powerful Roquefort-like cabrales cheese. Green, rainy Galicia in the northwest is known for octopus, chopped up and served dusted with paprika. The region’s deep-fried green peppers de Padrón are tasty and tricky, offering a kind of Russian roulette—about one in ten is spicy hot.

Arguably the culinary capital of Spain is San Sebastián, in Basque Country, with inviting tapas bars (they’re called pintxos here) that display a stunning array of help-yourself goodies. Top dishes include spider crab, tasty anchovies, and seafood stew. Just grab what you like from the platters at the bar; when it’s time to settle up, the server will count the toothpicks on your plate.

On my trip with Roberto, I blitzed restaurants and tapas bars throughout the hill towns of Andalucía.

Restaurants are only open when they serve meals, but tapas bars are open all day.

Many visitors find the Spanish eating schedule frustrating. Lunch, the largest meal of the day, is eaten between about 2 and 4 p.m. Many Spaniards have a bocadillo (baguette sandwich) around 11 a.m. to bridge the gap between their coffee-and-roll breakfast and late lunch (hence the popularity of fast-food sandwich chains such as Pans & Company). Because most Spaniards work until 7:30 p.m., a light supper at 9 or 10 p.m. is typical. Generally no self-respecting casa de comidas (“house of eating”—when you see this, you can bet it’s a good, traditional eatery) serves lunches and dinners at American hours.

Not only are mealtimes different in Spain—the portions are, too. It’s unusual to find a restaurant that distinguishes between “starters” and “main dishes.” Instead, most restaurants serve their dishes in full portions called raciones, or in smaller half servings, or media-raciones. Ordering media-raciones is an easy way for you and your travel partner to broaden your tasting experience (two people can fill up on four media-raciones). Don’t wash it down with a glass of basic red wine (tinto); instead, ask for un crianza—for only a little extra, you’ll get a quality, aged wine.

To eat well any time, and within even the tightest budget, duck into a tapas bar and build a light meal out of appetizers. While I generally go for the rustic old bars, Roberto introduced me to a place that puts a contemporary spin on traditional tapas. We just about ate our way through the entire list of daily specials: asparagus snowed in with Manchego cheese, delicate cod-cheek sandwiches, and spicy pulled pork.

And three days into my Spain trip, it was clear I was settling in just right. I struggled to the top of a hill-capping castle ruin in Castille. Catching my breath, I surveyed the vast terrain and it seemed my sweat came with a faint whiff of jamón.