The days of boiled vegetables and stodgy puddings are long gone. London now ranks as one of the world’s top food cities, and its menu is endless. Like an immersion blender, the city melds flavors from a diverse range of cultures (from around 70 different countries and regions), allowing you to taste the world in a matter of hours. And nowhere is this more possible than in London’s transitioning (but trendy) multi-ethnic neighborhoods like the East End and Brixton.

To lead you to the best options (and eat as much as possible in one day), tour companies like Eating London and Fox & Squirrel will walk you through it all, bite by bite. 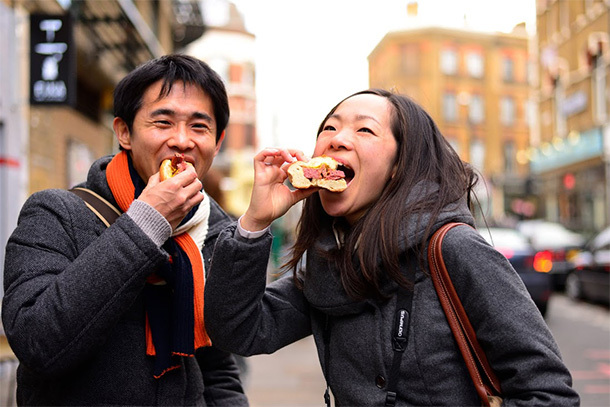 Once associated with gritty slums and the notorious Jack the Ripper, it’s hard to think of London’s formerly dodgy East End as tantalizing, but it is. In just a few blocks, you can essentially tour the world, sampling anything from Bangladeshi curries and French cheeses to proper British fare with contemporary twists.

Old Spitalfields Market: There has been a market on the grounds of this revamped indoor collection of trendy eateries, boutiques, and clothing and craft stalls for more than 350 years. Not to miss: Androuet cheese shop, where Alex Guarneri sells mostly raw-milk French cheeses aged in cellars below the market.

The English Restaurant: The name says it all at this classically English dining spot on the corner of Crispin and Brushfield streets. With sections dating back to 1670, its dark paneled interior complements traditional menu items like steak and onion pudding and guinea fowl au jus. Just don’t end your meal without trying the to-die-for bread and butter pudding baked with vanilla, orange, and brown sugar, and then doused with a rich custard sauce. 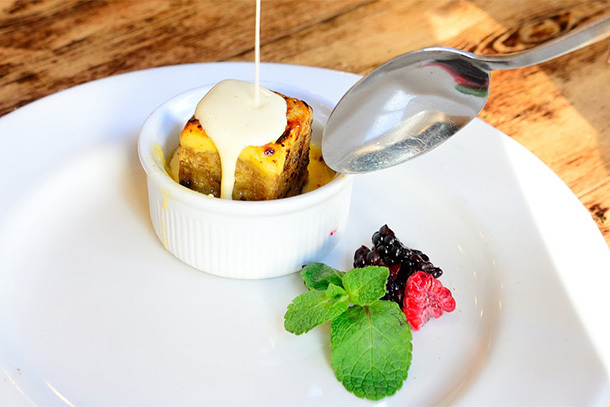 Bricklane: Slum-like and grimy turned artsy and edgy, this eclectic, ever-changing ethnic neighborhood is now pleasantly overrun with galleries, street art, hip bars, and Bangladeshi and Indian restaurants. In fact, there are more than 50 curry houses on one street—such as Aladin, favorite of Prince Charles—dishing out some of the best masala and vindaloo London has to offer.

Poppies: Travel back to the 40s and 50s at this award-winning fish and chips bar designed to evoke the thriving post-WWII era. Fried in a perfectly crunchy batter, the sustainably caught fish (such as cod, haddock, and halibut) wouldn’t be complete without the traditional sides of fries, bright green mushy peas, and homemade tartar sauce. 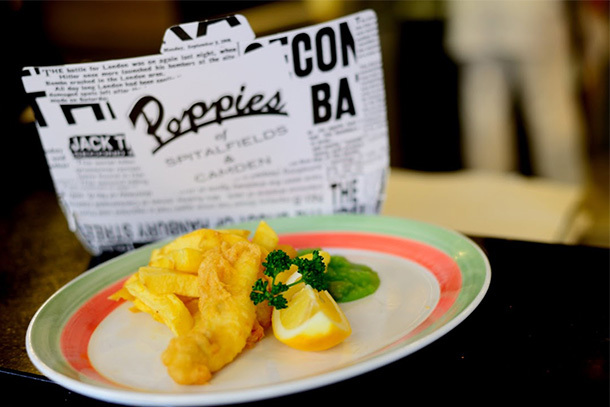 Pizzaeast: In the sub district of Shoreditch, across from BoxPark and its hipster-filled pop-ups, this “industrial chic” pizza joint set in a former tea warehouse entices with its fine wood-oven pies, antipasti plates, and salads. You could also just stop in for a decadent dessert; the salted chocolate caramel tart stands alone.

Craving more East End? Sample these spots and others on a walking tour with Eating London. 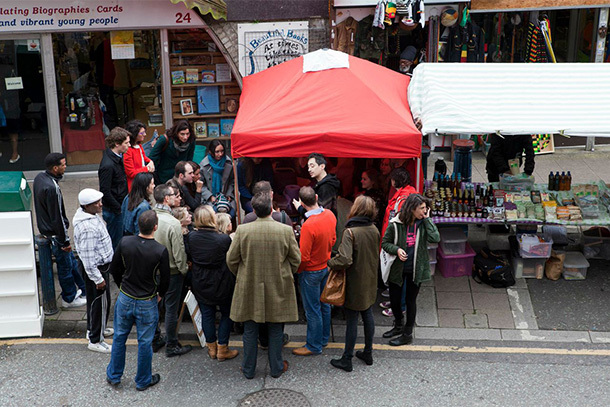 If you’re headed to up-and-coming Brixton, one of the city’s most vibrant retail sectors, you’re gonna have to rock down to Electric Avenue, the first street in London to have electric lighting (and yes, subject of the ’80s pop Reggae hit). To take it higher, delve into the eclectic Brixton Market and neighboring cafes emanating a mélange of African, Asian, Caribbean, and other ethnic flavors.

Brixton Market: A maze of shopping streets and covered arcades, this culinary enclave is more than just one market to behold. It’s an entire market village. Indoors or out, you could easily get lost for days perusing exotic produce stalls, rummaging through bric-a-brac, and eating yourself into a stupor at dozens upon dozens of cafes, bakeries, and takeaway joints. 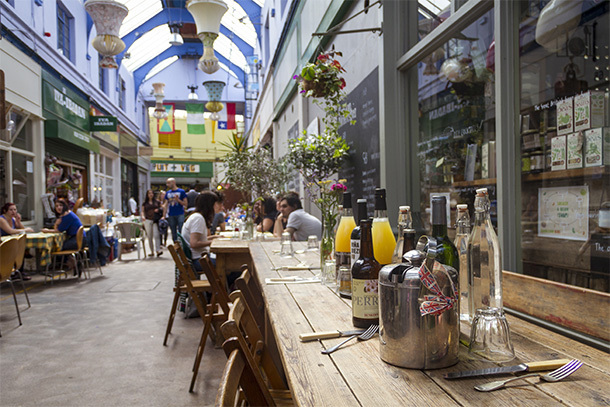 Brixton Brewery: Compared to U.S. standards, this independent craft beer maker might be considered a “nano” brewery, but its style is equally as hoppy (especially compared to the more bitter and less bold traditional English ale style). Stop in for a tour and taste the unfiltered, unpasteurized brews, including the Electric I.P.A., inspired by the famous street.

Abashawel Habesha Cafe: Indulge the senses by sipping on coffee brewed from quality Arabica beans while inhaling the piney aroma of frankincense burning softly on the table. When digging in, use your hands Ethiopian-style by picking up bits of stewed lentils and vegetables with thin, spongy injera bread made from a gluten-free teff flour sourdough that’s been fermented and cooked in a crepe pan.

Fish, Wings N Tings: Feel the beat of Reggae on the streets as you approach this tiny restaurant at the entrance of Brixton Village Market. Outdoor picnic tables and a cheerful Caribbean vibe brighten even the grayest of London days. Trinidad-born chef-owner Brian Danclair cooks the simple menu of jerk chicken, goat curry, and rotis with a lot of love. And although some dishes come with a healthy dose of heat, it’s easy to cool it down with a Red Stripe or glass of homemade ginger beer.

Lab G (Laboratio Artiginale Del Buon Gelato): In Granville Arcade, this bright yellow gelato parlor heightens the natural chemistry between cream and sugar, scoop by scoop, with its homemade artisan ice creams and sorbets. Flavors like tutti fruitti, stracciatella (with flecks of chocolate) and the ever-popular salted caramel are a finale to any Brixton food tour.

Eat your way through more of Brixton with Fox & Squirrel’s food walk.

Have a question for Anne about her trip to London? Want to share your own London experience? Leave a comment below! You can also follow Anne on Google+.

SmarterTravel contributors occasionally accept free or subsidized travel in exchange for our unbiased opinions. We never accept compensation in exchange for a positive review.