Nothing says summertime like a creamy, fruity tropical rum cocktail—preferably sipped while lounging on a sandy beach. To celebrate National Rum Month, let’s raise a glass to some of our favorite rum drinks and the Caribbean countries from which they originated. Bottoms up!

The origins of the piña colada are as muddled as the fresh pineapple that’s blended with cream and ice to make the base of the drink. Three San Juan bartenders claim to have invented it: Ramón ‘Monchito’ Marrero Pérez and Ricardo García both contest that they first poured the fruity cocktail while working at the Caribe Hilton, and across town at the Barrachina Restaurant, Ramón Portas Mingot claims it as his own original concoction. Clearly, the only way to help settle this argument is to try all three, right?

Getting to the Soggy Dollar Bar on the island of Jost Van Dyke requires a bit of effort, but once you taste the bar’s signature rich, fruity cocktail, all your troubles will melt away. Purportedly created at the Soggy Dollar in the ’70s, the Painkiller is a blend of dark rum, cream of coconut, and pineapple and orange juices topped with fresh grated nutmeg and best enjoyed from one of the bar’s beachside hammocks.

Tucked away in the secluded grounds of the Rockhouse Hotel in Negril, the open-air Pushcart Restaurant concocts island-themed drinks that are as delicious as the accompanying Jamaican dishes (try the escovitch fish and curried conch). The namesake Pushcart cocktail combines house-made pineapple-ginger syrup and soda water with a healthy does of Jamaican white rum from nearby Appleton Estates.

We’re not talking about those slushy-machine-made frozen daiquiris that taste like artificial strawberry product and give you a cold headache. Classic daiquiris are made with just three ingredients: white rum, simple syrup, and lime juice. Serve in a chilled glass, and toast to Jennings Cox, the mining engineer who is said to have created the drink in the late 19th century in the Cuban town of Daiquiri. 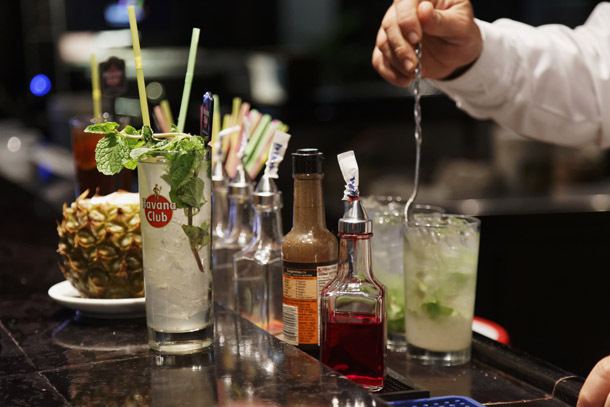 Five simple ingredients come together to create this refreshing cocktail: fresh mint, sugar, lime, white rum, and sparkling water. It’s a winning combination on a summer day—so delicious, in fact, that it’s said to have been one of the favorites of booze-loving author Ernest Hemingway. If that’s not an expert recommendation, we don’t know what is.

Next time your cocktail comes with one of those fun, colorful swizzle sticks that nowadays are used more for decoration than function, you can thank the rum swizzle. This drink, which has many variations but always includes rum, was originally stirred with stems cut from bushes: the original swizzle sticks. They were used to vigorously incorporate ice into this frosty concoction, often referred to as the national drink of Bermuda.

One type of booze isn’t enough for the Bahama Mama: This tropical drink is a combination of dark and white rums, plus coffee and coconut liqueurs. That heavenly combination acts as the base on top of which bartenders often add pineapple and lemon juice, grenadine, and a cherry garnish. Talk about the taste of the Caribbean!

Tour the Casa Bacardi Distillery in Puerto Rico, the River Antoine Rum Distillery in Grenada, the La Mauny distillery in Martinique, or Appleton Estate in Jamaica for an up-close look at the rum-making process. At the end of the tour, you can take home a bottle or two as a souvenir from your trip.

A number of Caribbean hotels and resorts are running rum-themed experiences throughout the month of August and into the fall. All-inclusive Barceló Bávaro Beach Resort in Punta Cana is offering a complimentary bottle of Barcelo rum in each of its Club Premium guest rooms, plus cigar-and-rum pairings and tours of local distilleries. In San Juan, at the Caribe Hilton, guests can book the Piña Colada Fest Package, which includes two welcome piña coladas, daily buffet breakfasts, mixology classes, and sweepstakes.