There’s no better way to spend the summer than on a windows-down, music-blasting, cross-country road trip. But as peaceful as it is to watch the countryside speed by, sometimes it’s nice to take a break from the driving, too—especially if you’re driving through Kentucky. Make your way towards south central Kentucky to visit Bowling Green, a small city that really knows how to pack in the summer fun.

Sure, it may not seem like much more than a small town spread across grassy hills, but between the baseball and beer (and the all-American sports car culture … and the odd underground wonder or two), Bowling Green will take you at least a couple of days to fully discover.  Here’s how to spend those days. 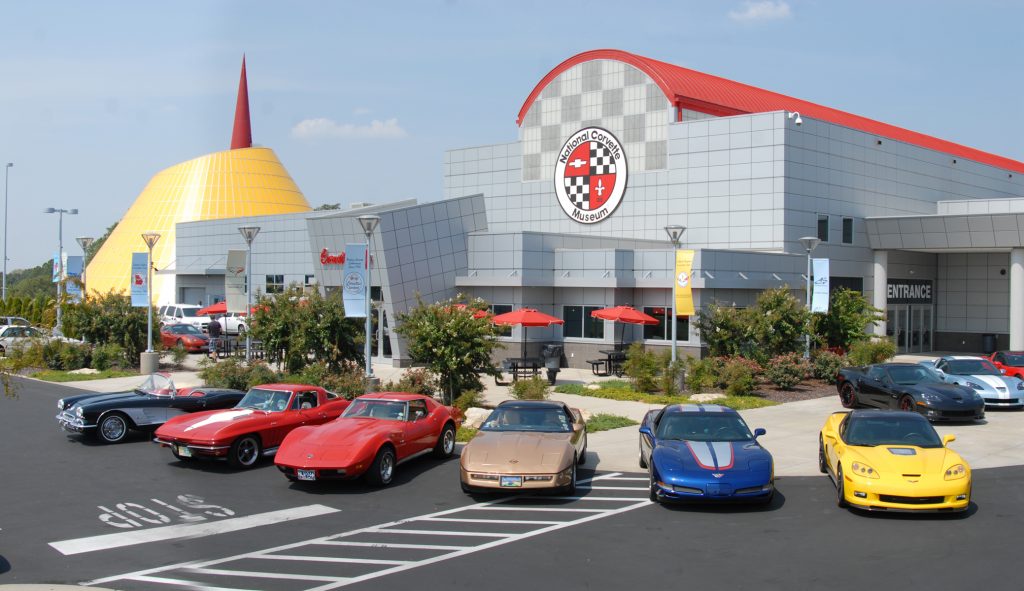 As the mecca of the Corvette world, Bowling Green draws in dedicated enthusiasts all year round to see the only factory in the world that manufactures the iconic sports car. After taking a plant tour, you’ll only need to cross the highway over to the National Corvette Museum to explore the Corvette’s deep impact on American culture. (You can also check out the rarest and most beautiful Corvettes on display.)

If you’re lucky, you might witness and take part in a Corvette “delivery,” where new Corvette owners come to personally pick up their Corvettes inside the museum and drive out to the cheers and applause of the museum staff and visitors.

New to the museum is the Skydome Sinkhole exhibit, which tells the story of the large sinkhole that opened up beneath the museum in 2014, swallowing eight Corvettes collectively worth millions. The sinkhole has now been covered up and the floor reinforced, but you can still peek through a window to the cavern below. The recovered Corvettes are a little worse for the wear, but are still on display in the Skydome.

And if simply seeing the museum isn’t enough to get your engine going, head across the way to the NCM Motorsports Park, where you can break away from those pesky speed limits. Get on the track for some hot laps, either with a professional driver or in your own car.

Native Americans sought its shelter. Notorious fugitive Jesse James holed up in it. A mysterious and deadly blue hole swallowed a Confederate soldier inside it.  And by “it” I mean Bowling Green’s Lost River Cave, once home of the city’s most popular “Nite Club” and currently the organization that rescued this neglected marvel from a local landfill, and transformed it into a thriving nature center.

Here you’ll find the only underground river tour in Kentucky and the shortest and deepest river in the world, according to Ripley’s Believe it or Not. As you duck below the low-hanging entrance and glide into darkness, you can admire the growing stalactites and the sound of dripping water.

You’ve got the choice to explore the cave by boat tour, kayak, or—if you’re willing to get down and dirty— a cave crawl, but above ground there’s still plenty to see in the 60-acre park filled with walking trails, campgrounds, and  nature-focused activities for the kids (don’t forget to keep your eye out for upcoming events). No trip to Bowling Green can be considered complete without a trip to this remarkable place, which is not only a natural wonder, but a cornerstone of the community and a monument to its history.

Also worth checking out is the nearby Mammoth Cave National Park, just a 45-minute drive from Bowling Green.

Between braving the cave and speeding around in a Corvette, you’re going to need some fuel. Head downtown to explore the food and drink scene, from the upscale Bistro to the down-to-earth White Squirrel Brewery. If you’re lucky enough to be there on game night, check out the action and fun at the Bowling Green Ballpark, where the minor league Hot Rods always put on a good show for the crowd, and the concession stands are a hiding a treasure trove of actually good stadium food and craft beers.

Downtown is a great place to walk around, but there’s a lot more to be discovered as you explore Bowling Green by car. If you’ve got a hankering for ice cream, Chaney’s Dairy Barn is the best place to go. This dairy farm and creamery, which has been own and operated by the Chaney Family since 1888, not only offers deliciously perfected ice cream recipes, but also fun farm tours for families. And if you’re looking for something a little bit craftier, grab a drink at Wino’s Depot, a cool local spot where you can sample the beers on tap, or pick up some wine and beer for later.