When the Southwark Cathedral bells toll, it can only mean one thing: The bread is ready to come out of the oven. In late 2013, Bread Ahead bakery and cooking school entered London’s Borough Market with religious enthusiasm. Bakers Matt Jones and Justin Gellatly had their sourdough starter blessed inside the Gothic church, and they time their large, crusty “Cathedral Loaves” with the sounds and rhythms of its clock tower. Offering a slice of British life with its artisan baked goods, Bread Ahead isn’t just part of the market, it’s the essence of the market.

Like many other shops and stalls before it, Bread Ahead has added a new chapter to Borough Market’s culinary history book. Here, on the southern end of London Bridge, food “traders”—the butcher, the baker, and the aged English cheddar maker—have been hawking and selling for more than 1,000 years, keeping a tantalizing legacy alive.

Considered the oldest food market in London, Borough Market has undergone many transformations over the years as both a wholesale and retail food hub, from a medieval trading center riddled with criminals to an independent market built by decree “for the convenience and accommodation of the public.” Today, it remains a blend of old and new, traditional and trendy. Under the railroad tracks leading to London Bridge Station, old Dickensian architecture intermixes with sharp, modern angles and glass entranceways, while celebrity chefs commingle with local farmers.

Borough Market is now owned by a charitable trust and boasts more than 100 British and international food purveyors selling anything from fresh fish, meats, vegetables, and dairy products to breads, pastries, ciders, and other prepared foods. The market also has a conscience: Its recycling rate is 100 percent (meaning no food waste goes into landfills), and many vendors carry local and sustainable items.

Open for retail Wednesdays through Saturdays, Borough Market offers travelers a taste of England (and the world) in one lively communal setting. So dive into its wonderful chaos, taking in the competing smells and sounds while meeting the passionate traders (many of whom offer free samples).

Bread Ahead: Peek through the large glass windows to see bread dough being kneaded in 50-year-old vintage mixers, or come inside and join a baking class such as “Wild About the Yeast” or “Oath to the Loaf.” At the stall inside the market, purchase Eccles cakes, gingerbread, Gellatly’s famed doughnuts, and, of course, Cathedral Loaves, fresh from the shop’s ovens around the corner.

Gelateria 3Bis: Conceived by owner Francesco Prati and Italian ice cream maker Paolo Raffaelli, this Slow Food-approved gelateria proves you don’t have to fly off to Italy for authentic gelato. Using British cows’ milk and fruits, the silky ice creams are made in the traditional way, in fresh batches every day. Each waffle cone gets a drizzle of liquid chocolate before taking on scoops of up to two different flavors, such as fig and mascarpone, panna cotta, cherry, and pistachio. 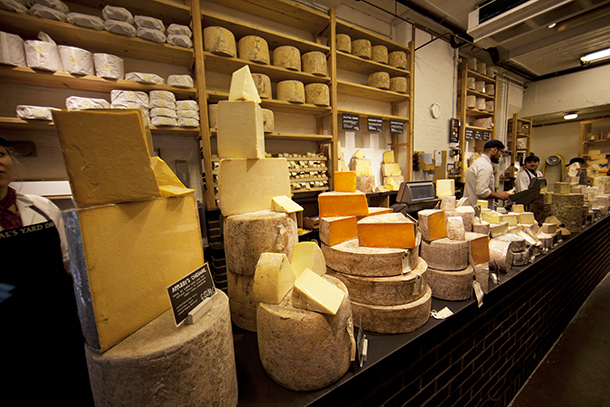 Neal’s Yard Dairy: Stand in awe at the enormous cheese wheels stacked high on shelves and along the seemingly endless counter as you choose from classics like Cheddar, Stilton, and Red Leicester from around 70 cheese makers in the British Isles (many are aged in Neal’s Yard Dairy’s own maturing rooms). Must try: the gloriously runny Stinking Bishop washed-rind cheese from Gloucestershire.

Rubies in the Rubble: Jenny Dawson has a thing for “ugly” fruits and vegetables and brings them to Borough Market every Saturday in the form of fine homemade chutneys and jams. By using surplus—but still delicious—ingredients, she’s not only preserving produce but also the environment by combating food waste. 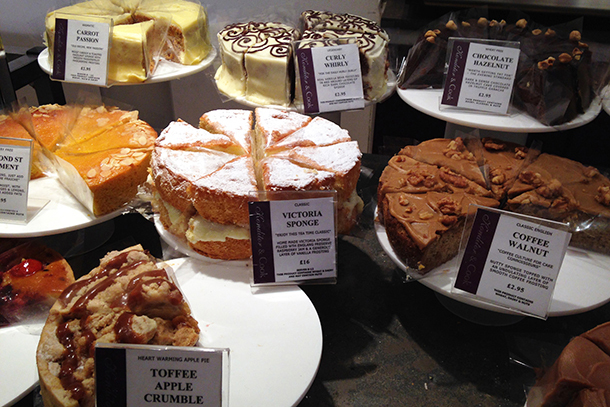 Konditor & Cook: At this popular London cakery, German baker Gerhard Jenne brings a touch of whimsy to English-style cakes such as the Curly Whirly, Victoria Sponge, and Almond St. Clement. For those super-special occasions, indulge in the cheeky, made-to-order “Blow Me” cake (referring to the candles, of course). Baking classes are also available.

Shellseekers: Darren Brown and his team of divers collect scallops by hand off the Devon coast and sell them fresh, along with crabs, prawns, and other types of sustainably caught shellfish, on beds of ice. Want a quick bite? Then look no further than his cooked scallops with stir-fried vegetables and crispy bacon, portioned onto beds of bean sprouts.

Learn more about Borough Market and other things to see and do in London at VisitLondon.com.

Have a question for Anne about her trip to London? Want to share your own London experience? Leave a comment below! You can also follow Anne on Google+.