With the start of fall nearly here, another summer travel season is in the books for the travel industry. It has been a controversial few months for Airbnb, an alternative accommodation website, amid a few safety concerns and allegations against hosts.

Airbnb was in the national news this summer, when a 19-year-old Massachusetts resident made allegations against his Airbnb host, leaving some questioning the company’s safety procedures and policies. However, Airbnb’s Summer Travel Report paints a rosier picture. On the last page of the report (view here), the company states that of the 17 million travelers it connected with hosts this summer, there were only 300 calls into their Trust and Safety team that were considered “urgent situations.” How the company defines “urgent” is unclear but they do guarantee that their “Trust and Safety team” is available 24/7 in every time zone with over 250 employees handling issues.

The main focus of the report is the site’s growth in the past five years—which has grown an incredible 353 times over the 47,000 travelers it hosted in 2010. As pictured below, that is more than the population of Greece, Sweden, or Switzerland. Travelers came from all over the world and traveled to 57,000 cities according to the report. It was also a big summer for unique accommodation—from tree houses to castles, thousands of people chose alternatives to a standard room, house, or apartment. 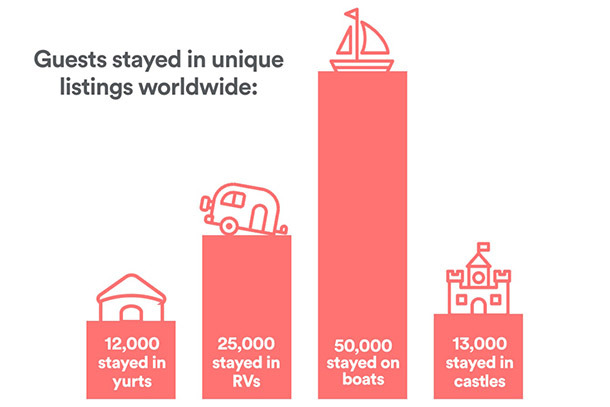 RELATED: How the Sharing Economy Opens New Doors for Travelers

Airbnb also continues to be a major boost in cities with world events; from soccer tournaments, the Olympics, and music festivals/concerts, cities hosting celebrities, political figures, and major events see growth on Airbnb. For example, right now Philadelphia and Cuba are the two fastest-growing cities on Airbnb according to the report, due to the Pope’s visit later this month.

Ashley Rossi is always ready for her next trip. Follow her on Twitter @ashley_stravel for more advice about travel hacks and destination ideas.