The story of New York, including its most beloved food traditions, is a story of immigration to America. Cherishing memories of home and determined to become part of the great melting pot, immigrants have introduced and mingled flavors from around the world. The most famous New York foods reflect this heritage while showing off the innovation and experimentation for which the city is known.

The Best Foods to Try in New York City

Sampling New York foods should be as much a part of your itinerary as visiting the city’s best-known sights. Below are 11 foods to try in New York City on your next trip. 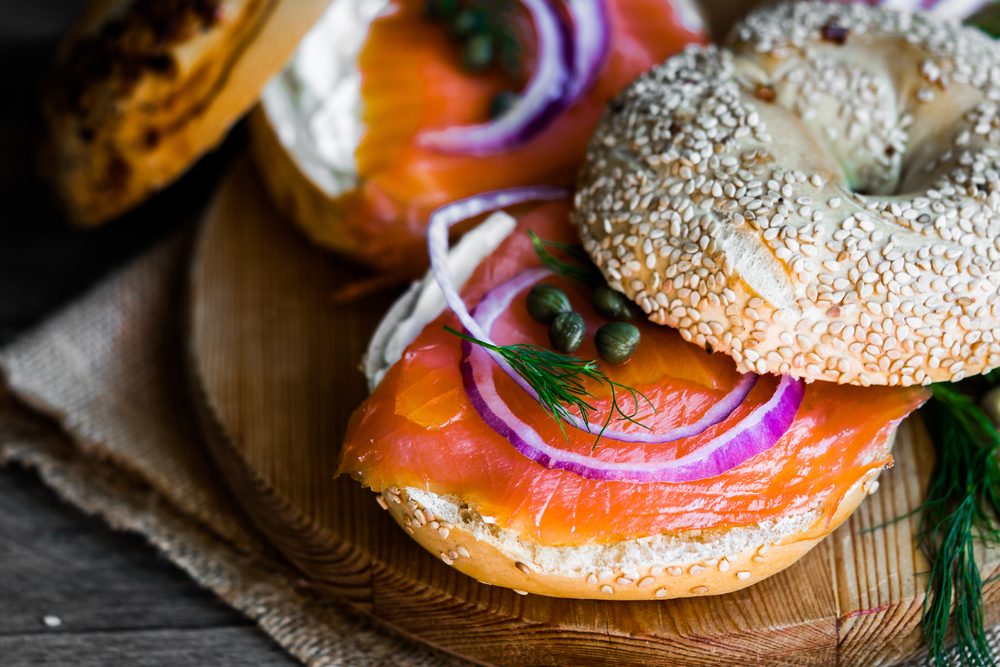 New York’s favorite breakfast-to-go initially took root with Jewish immigrant communities in New York’s Lower East Side. Lox is salt-cured or brined salmon, often thought of interchangeably with its less salty cousin, smoked salmon. To taste the difference and sample a classic untoasted bagel and lox, head to East Houston and the beloved Russ & Daughters. Jewish food pioneer Joel Russ launched this general store and carving counter more than a century ago, and still thrives with a dizzying variety of smoked fish and delicious trimmings like caviar cream cheese.

New York pizza has no equivalent. Some say it’s the mineral composition of the city’s tap water that gives the dough its pliable texture and unique taste. To others, it’s the dogged focus on simplicity of ingredients or the traditional method of eating, folded over like a sandwich. Likely, it’s all of the above.

There’s hardly a New York block without a pizza joint, but for a taste of the original, choose America’s first pizzeria. Lombardi’s, opened in Little Italy by Naples native Gennaro Lombardi in 1905, serves large pies cooked in a coal-brick oven. If you can’t deal with the oft-long lines, pop across the street to try the unique vodka pizza at Pomodoro.

Whether they’re Blue Points, Chesapeakes, or Cape Blues, New Yorkers love slurping raw oysters from the half shell. New York Harbor was once renowned for its bounty of oyster beds, with bivalves being shucked everywhere from fine restaurants to street carts. Though those beds have long closed due to over-harvesting and pollution, the city still devours oysters in impressive numbers.

For a grand tasting experience, visit the mother of all New York oyster bars at Grand Central Station. Since 1913, Grand Central Oyster Bar has elevated the oyster to tasty art. Today, dozens of varieties are served daily, offering a sampling opportunity akin to tasting fine wines. Try several varieties raw or take your oysters pan-roasted, baked, or simmered in a hearty stew.

Among the most popular foods to try in New York are Cantonese dumplings, noodles, and buns served dim sum style. These mid-morning and lunchtime meals are meant for savoring and socializing, thus the lengthy parade of small plates and copious amounts of house-blend tea for palate cleansing between courses.

In traditional restaurants throughout Chinatown and beyond, servers weave through dining rooms with push carts loaded with steam baskets of delicacies like steamed and pan-fried dumplings and buns filled with pork, seafood, and vegetables. Rice noodle rolls, short ribs, turnip cakes, chicken feet, and egg custard buns are other dim sum staples.

In most restaurants, you will be given a punch card or color-coded plates to identify selections and easily calculate the tab. A good rule of thumb is two to three dishes per person. Try local favorites Sunshine Seafood on Division Street or ultra-popular Jim Fong’s for the full experience.

Everyone knows New York is a hot dog-crazy town, and ways to take your dog are as diverse as the City’s population. Grab a classic all-beef wiener topped with sauerkraut or sauteed onions and spicy brown mustard from vendors on any block. Better yet, savor one of New York’s most original pairings, hot dogs and tropical drinks, at Papaya King, where Greek immigrant Gus Poulos created a phenomenon in 1932 by combining his passion for fruit and meat. Locals and celebs can’t get enough of this Upper East Side institution (even Martha Stewart admits to the guilty pleasure).

Since one dog is never enough, make the journey to Coney Island to enjoy a hot dog from Nathan’s Famous while strolling the historic boardwalk. Or go upmarket with The NoMad Bar’s bacon-wrapped black truffle wiener.

New Yorkers have a major passion for pastrami, and it’s one of the essential foods to try in New York City. Raw meat, cured and seasoned to perfection, then smoked and steamed, is cut by hand into thin slices and stacked onto rye bread with spicy brown mustard. When it’s done right, the first bite can be religious.

For more than a century, Katz’s, New York’s best-known Jewish deli, has served slow-cured and hand-carved pastrami to legions of locals and visitors alike. The Lower East Side legend is the place to go for classic pastrami paired with Dr. Brown’s Cel-Ray soda.

For old world meets new school, try Harry and Ida’s Meat and Supply Co., a general store and sandwich counter in the East Village on Avenue A. The tiny space serves up big sandwiches (Pops) as well as half portions (Ida) from slabs of brined and smoked brisket. Get creative with fermented cucumber kraut and anchovy mustard.

New York is a city of historically big appetites, so it’s no wonder steakhouses are a local food tradition. Power, wealth, and exclusivity are flavored in every bite of juicy steak, no matter the cut.

Three NYC classics offer a quintessential steakhouse experience. Since 1887, Peter Luger Steakhouse has lured Manhattanites over the bridge to Williamsburg for the highest quality beef, dry aged on site. The Luger lunchtime burger, made with steak trimmings, is the stuff of foodie legend.

During Prohibition, a former Ziegfeld girl and her gambling-prone partner opened a speakeasy on 52nd Street that would become Broadway’s first steakhouse (once booze became legal again). Gallaghers is still one of the Theater District’s most heady destinations. The meat cooler where prime steaks are aged is visible from street.

If America’s hamburger has an equivalent in China, it might be the pork belly bun, a tasty snack food served in street food stalls across the country. No American restaurant does the dish justice quite like David Chang’s Momofuku Noodle Bar, where the New York craze began. Pork, cured and roasted on site, is sandwiched inside a billowy bun with cured cucumbers, scallions, and hoisin. Warning: This dish will inspire cravings long after your trip is done—just another reason to plan a return trip to NYC. 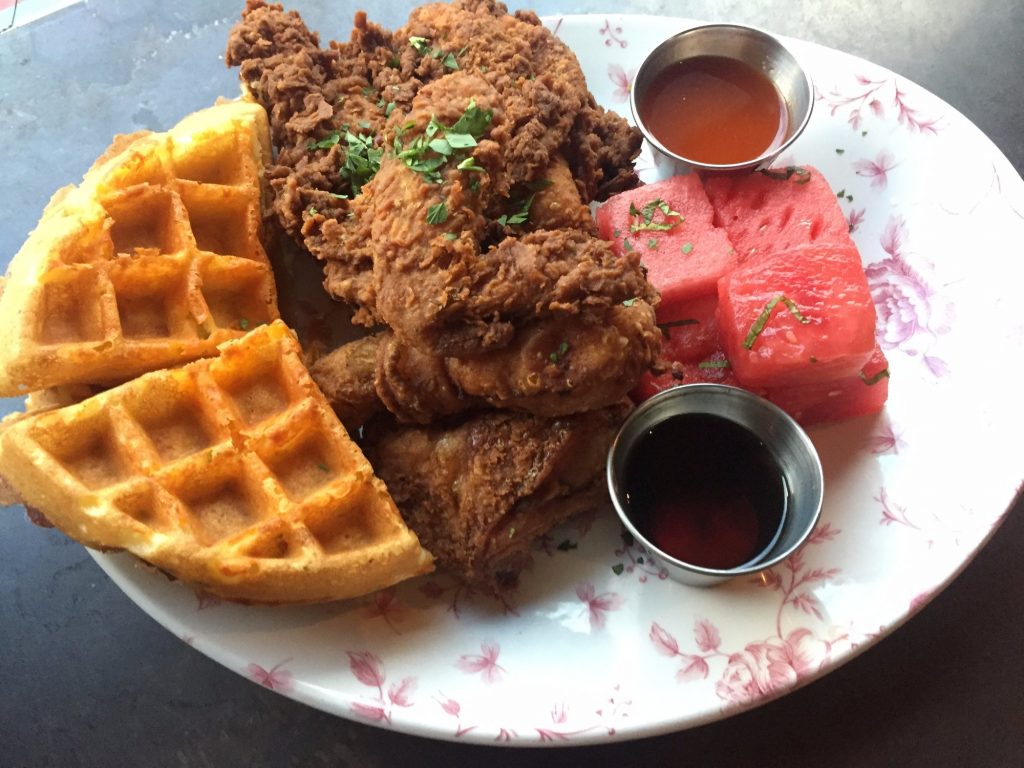 Some say the popularity of this savory/sweet soul food staple originated when hungry jazz musicians coming home after late-night sets couldn’t decide between dinner and breakfast, so they requested both. Harlem supper and jazz clubs have served the decadent combination for generations since, often with a side of live music.

At Sylvia’s, where waitress-turned-entrepreneur Sylvia Woods earned the moniker of “queen of soul food” after establishing this restaurant in Harlem in 1962, you can get chicken deep-fried or smothered in gravy. Portions are large and the atmosphere is classic Harlem.

The cocktail named for the city’s best-known borough is one of the key foods to try in New York City (because “cocktails” are a food group, right?). The Manhattan Club is believed to have invented the whiskey cocktail in the late 19th century. Traditionally, the drink is two parts rye whiskey, one part sweet vermouth, and a dash of bitters, stirred and garnished with a maraschino cherry.

“What’s a cronut?” you ask. The answer: a small croissant-donut hybrid that’s created an extra-large craze. The creation of the pastry chef behind Soho’s Dominique Ansel Bakery, the cronut takes three days to make from letting the dough ferment overnight to creating the cronut shape and filling.

The bakery only makes 350 per day, but the cronut is only the delicious beginning; be sure to try Ansel’s other pastries and creations.