Consumer advocate Ed Perkins is traveling in Europe this week, sending tips and tales from the road. Follow along here.

I’m not the first SmarterTravel contributor to ride the 787. But as far as I know, everyone has found it to be unusually comfortable, largely because of the low cabin altitude and high humidity. Those big windows are nice, too.

The technical element is also good; the 787 performs very well. I was amazed that our flight on Norwegian’s 787 Dreamliner climbed right to 40,000 feet before we flew over Vegas. Most jets can’t get that high that fast, but apparently it’s routine for the 787. Also, according to trade reports, the 787 is meeting its ambitious goals of low fuel consumption.

Norwegian’s offer to the traveling public is alluring. At least so far, Norwegian offers a substantial price advantage over other airlines, even after adjustment for the a la carte pricing. Economy class is the now-standard nine-across seating (three by three by three) and  the standard 31- to 32-inch seat pitch, but with modern seats and large touch-screen display at each seat. The for-fee economy meal seemed a bit better than the free options you get on major airlines, and Norwegian offers snacks for purchase via the touch screen. 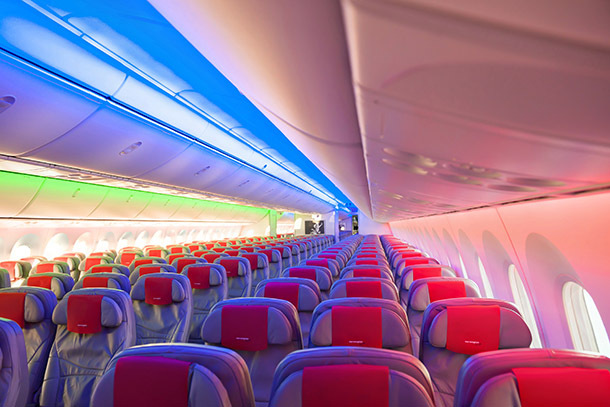 Its top-of-the-line option is premium economy, which, at seven-across (two by three by two) and 46-inch pitch, is among the roomiest in the industry. The meal service there is an upgraded economy meal. It’s not comparable to business class on the giant airlines, but the beverage service is excellent.

All in all, Norwegian’s offer to the public is very attractive. So far, I’ve seen no retaliation from the giants, but if Norwegian gets much bigger, you may see some interesting action. Stay tuned.