While Germany sits in the driver’s seat of Europe’s economy, it doesn’t take a cultural backseat either. Here are a few of the latest developments for 2014.

In Berlin, a multiyear renovation project continues at Museum Island, filled with some of the city’s most impressive museums. Beginning in the fall and continuing until 2019, the star of the Greek antiquities collection in the Pergamon Museum—the Pergamon Altar—will be closed to visitors. The museum’s north wing (formerly home to other Classical antiquities) is already closed. In the meantime, some Classical Greek artifacts can be seen at the nearby Altes Museum. In other Museum Island news, reserved timed-entry tickets are no longer required at the Pergamon and Neues museums.

Although Berlin opened its new main train station (Hauptbahnhof) in 2006, construction is likely to begin again in 2014 to extend its roof. Many travelers may be diverted through other stations—such as Bahnhof Zoo and Ostbahnof—for the duration.

Berlin is also trying to finish construction of its new €5 billion airport, Willy Brandt Berlin-Brandenburg International. But the project has been perennially delayed by a faulty fire-safety system, glitches in the baggage-sorting equipment, and other technical problems; even a partial opening in 2014 is not likely.

Each year it seems Berlin, the scene of so much tumult in the 20th century, has new memorials. Near the powerfully evocative Memorial to the Murdered Jews is a memorial dedicated to the homosexual victims of Hitler’s rule, and a new Roma and Sinti memorial. The latter is to remind all who mourn the slaughter of 6 million Jews during the Holocaust that Hitler aimed to exterminate Europe’s Roma and Sinti (a.k.a. Gypsy) population as well. While Berlin has done what it can to keep the focus off of Hitler himself, the parking lot that sits over the site of Hitler’s bunker is a few minutes’ walk from these other memorials. The site (where he committed suicide just days before the end of World War II in Europe) comes with an information board to explain the significance of the spot. 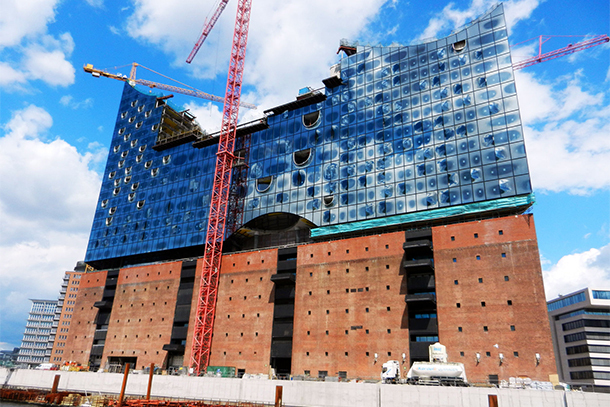 Hamburg is not your grandmutter’s port town: The northern metropolis is one of Germany’s wealthiest cities and a major financial, commercial, and media center. As is the case with port cities all over Europe, Germany’s leading port saw its docklands abandoned as freighters needed to be accommodated in a more modern setting outside of town. The run-down (yet central) real estate of the old harbor has been given new life with a massive renewal project—HafenCity. Its shining glory is the new Elbphilharmonie concert hall, which looks like a glass palace resting on top of an old warehouse. However, like Berlin’s airport, the concert hall has hit major snags—it’s about €270 million over budget and won’t be opening until 2017—about seven years late.

To the south, travelers sleeping in the Bavarian town of Fussen are now entitled to the Fuessen Card, paid for by the hotel tax. This card allows free use of public transportation in the immediate region (including the bus to “Mad” King Ludwig’s famous castle—Neuschwanstein), as well as discounts to major attractions. Similarly, the Aktiv-Card for the Reutte area just across the border in Austria includes free travel on local buses and free admission to some attractions. Also new in Reutte, the Alpentherme Ehrenberg is an extensive swimming pool and sauna complex, featuring two indoor pools and a big saltwater outdoor pool, as well as two waterslides.

In Frankfurt, the new European Central Bank building, with its glistening twin towers topping out at 607 feet, is scheduled to open in 2014. The “New Frankfurt Old Town” construction project, stretching from the cathedral to the city hall, is also underway. It will include up to 35 new buildings, several of which will be reproductions of historic structures destroyed during WWII air raids.

In Nurnberg, the Imperial Castle (Kaiserburg) has reopened after a restoration. Visits to the castle’s “Deep Well” (which, at 165 feet, is … well, deep) are now accompanied by a guide. Wittenberg’s Town Church of St. Mary’s—which was Martin Luther’s home church for many years—is being renovated. From early 2014 to early 2015, the nave of the church will be closed, and no organ concerts will be held. By the way, Germany’s many Luther sights (especially in the Luther cities of Wittenberg, Erfurt, and Eisenacht) are gearing up for a very festive 2017 (on a Lutheran scale anyway)—the 500th anniversary of Luther kicking off the Protestant Reformation in 1517.

Despite a few construction-related delays and closures, Germany remains one of the easiest places to travel—offering efficient public transportation, state-of-the-art museums, and locals who are ready and willing to give travelers a hearty “Willkommen.”