Can an airline “democratize” business-class? New French boutique carrier La Compagnie is going to try. While they’re at it, lie-flat premium seats to Europe are yours for economy prices. This is not a drill.

Kicking off with five weekly flights between Newark Liberty and Charles de Gaulle in July, La Compagnie is advertising fares to Europe starting at around $1,600; that’s before any introductory promotions, which I’ll get to in a minute. The carrier is operating a Boeing 757-200 aircraft entirely equipped with business-class seating: a single-class cabin that has 74 seats that recline flat in a two-by-two configuration. Each seat is positioned in a private shell, passengers receive pre-loaded Samsung entertainment tablets, and the entire plane has free Wi-Fi. Here’s how it will look: 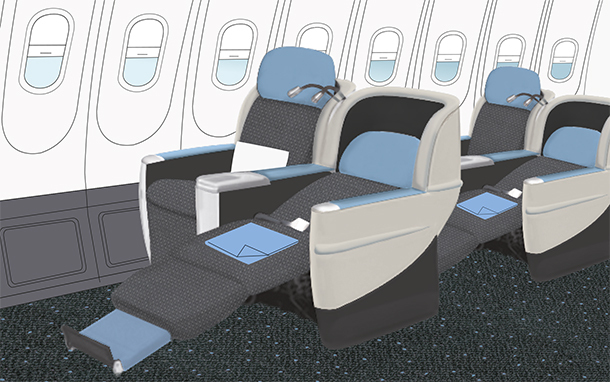 I tested fares on the airline website, which isn’t yet available in English. My rudimentary college-level French got me through most of the booking process. I found weekday flights from New York to Paris in August for 1,011 euros, or $1,376.95 roundtrip (based on today’s exchange rate on xe.com). Comparatively, nonstop economy fares from Newark to Paris in August will run you roughly $1,400 on American Airlines, and about $1,500 on United or Lufthansa, according to a search on Kayak. This is a fantastic deal.

La Compagnie is also offering a two-person summer flight deal: two roundtrip tickets between Paris and New York for 1,776 euros (a nod to the United States’ Declaration of Independence) or about $1,209.22 per person. This deal covers travel from July 11 through September 5, and bookings must be made by mid-August.

There’s a catch, though. You knew it was coming. Fares aren’t available for purchase in the U.S. yet. The company is waiting on government approval. I spoke with a representative for the airline, who told me that La Compagnie expects tickets to be available in the States within “a few days.” La Compagnie’s English-language site appears to be still in the works.

In the meantime, I’m on the edge of my seat. Will affordable and comfortable across-the-pond flights become a reality for leisure travelers? Since La Compagnie has just the one plane, tickets could sell out rather quickly. (The company has plans to acquire a second jet later in the year.) Moreover, there’s certainly no guarantee that this business-model will thrive over the long term.  Open Skies, Silverjet, and Eos are some of the transatlantic-flying boutique airlines that have come and gone over the years. The business-class-only model isn’t typically gangbusters.

I asked consumer-advocate Ed Perkins what he thought about the new carrier. Perkins told me, “Frankly, I wouldn’t bet on long-term success, but I suspect that, at least for a few months, vacation travelers from the New York-area to Paris will find a really great deal.” Perkins also told me that he knows of only one airline that has had success with an all-business-class transatlantic service; that would be British Airways A319 flights, which conveniently fly to tiny London City Airport.

We’ll let you know when tickets go on sale in the U.S.