Lobster rolls, clam chowder, fisherman’s platters, clam balls. Hungry yet? When in the Boston area, a northbound trek is a must for any seafood lover. Check out these Cape Ann seafood shacks when the urge for a lobster roll kicks in.

Not just a restaurant but an institution, Woodman’s is celebrating its centennial this year. One hundred years ago, Chubby Woodman opened the doors to the popular Essex seafood shack. But the pivotal moment came two years later in 1916, during the Essex Fourth of July parade, when Chubby served up shack-style fried clams—claiming to be the first to do so. Five generations later, the year-round restaurant has expanded to include a successful clambake and BBQ catering service, an ice-cream stand, and an online seafood-purveyor business. A few of the many national accolades dotting its walls include “Best Seafood in America” by Forbes FYI magazine, “Best New England Restaurant” by About.com’s Readers’ Choice Awards, and “World’s Best Fantastic Fast Food” by the Travel Channel. 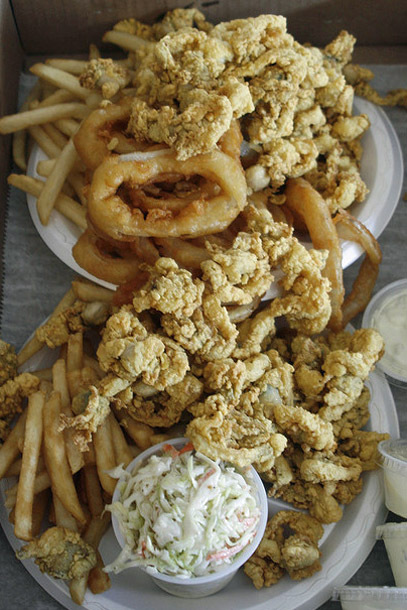 Menu Highlights: Though famous for its deep-fried clams, there are plenty of other not-to-be-missed menu items, including award-winning onion rings and clam chowder and scrumptious clam balls. Most dishes are gluten-free. Pair these rich specialties with one of many draft beers, most from local breweries. In fact, Woodman’s had the vision to be one of the first restaurants in the Merrimack Valley to serve Samuel Adams craft brews.

Come summer, there is never a shortage of seafood joints in Massachusetts’ quaint North Shore towns, but J.T. Farnham’s is a local favorite that stands out. This Essex River haunt screams New England charm, and while many may enjoy the striking marsh views and friendly service, everyone’s really here for the food, especially those whole-belly fried clams.

The best seafood shacks use the freshest ingredients, and you can taste this dedication in the J.T. Farnham’s seafood chowder, which distinguishes itself from the competition with a thinner broth bursting with fresh seafood.

The good people over at The Lobster Pool Restaurant pride themselves on dishing up a “no nonsense, no celery lobster roll.” We’re talking straight-shooting piles of lobster meat, without any of the fillers that only get in the way of your taste buds enjoying the subtly seasoned crustacean delight.

Menu Highlights: Crab cakes, steamers, and, ahhh … that view. Seafood always tastes better with a chaser, so bring your spirits, because The Lobster Pool is BYOB.

Continue on the Food Trail

After hitting these popular North Shore seafood shacks, continue northbound to gorge on lobsters at the Maine Lobster Festival in Rockland. Celebrating its 67th anniversary this year, the festival runs from July 30th through August 3rd.

Salem, too, celebrates the season’s marine bounty with the Salem Willows Seafood Festival running from July 11 through 13. Beside food, the fest has music performances, chef demonstrations, and fireworks.

What’s your favorite seafood shack and meal when on the North Shore?

(Photo Credits in Order of Appearance: Patricia Magaña and dbking via flickr/CC Attribution)