Icelandair tempts visitors with good fares to Europe and free stopovers, which I took advantage of on my way from Europe back to the U.S. recently. Besides touring the capital city, Reykjavik—where 60 percent of Iceland’s 317,000 citizens live—I took time to explore the more isolated areas. The country’s interior is basically uninhabited, but its perimeter is encircled by an 850-mile-long Ring Road, also known as Route 1. This road—not completed until 1974—makes it possible to visit the country’s more remote geological oddities.

With my guide Arnar at the wheel of a sturdy “super Jeep,” I spent a day in volcano country in Thorsmork (Thor’s Woods), a nature reserve in the southwest surrounded by mountains, rivers, and lagoons. The weather was terrible, but it was still a glorious day as we ventured up a long lava-flow valley in the shadow of Eyjafjallajokull, the famous volcano only Icelanders can call by name. Non-Icelandic speakers are invited to refer to it by its first letter and the number of letters that follow: E15. In our jeep, Arnar and I climbed crumbly hills, forded rivers and a wet volcanic desert, and eventually parked at the foot of a mighty glacier for a picnic.

The valley landscape has plenty of moss and green scrub covering black volcanic lava flows. Even when the first settlers came to this island—some 500 miles from Scotland, its nearest neighbor—Iceland was nearly without trees. Those early immigrants were Vikings, thousands of whom came in the ninth and 10th centuries. (With my Norwegian heritage, I felt surrounded by cousins.) Icelanders established a national parliament in 930—considered the first of its kind. Shortly after that, while under extreme pressure from the Norwegian king, Iceland converted to Christianity—so they’ve been church-goers for a thousand years. Rather than wars, Icelanders weathered centuries of brutal winters—and volcanic eruptions. 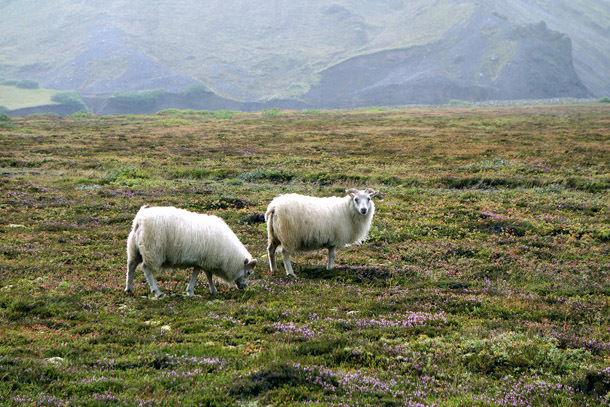 These eruptions are a by-product of location. This island—a little smaller than the state of Kentucky—is where the North American and Eurasian tectonic plates do the bump. The western half of the island with the capital Reykjavik is on the North American side, the eastern half of the island is on the Eurasian plate, and the Mid-Atlantic ridge down the middle is a fault with plenty of geological indigestion.

Living on an island of live volcanos in the middle of the ocean is not easy. One of the biggest lava flows in recorded history came from the Laki volcano in 1783, decimating 20 percent of Iceland’s population. The volcanic dust impacted weather and crops in Europe for several summers, causing widespread hunger. Some historians say those conditions contributed to the economic unrest that led to the French Revolution at the end of that decade. Though most eruptions aren’t so devastating, Iceland weathers an average of one every five years. The eruption of Eyjafjallajokull was big news in 2010, when it stopped air travel across Europe, inconveniencing a lot of travelers—including me.

All the geological activity does have its benefits though. Geothermal power plants tap into the heat spilling out from deep in the earth. Across Iceland, you’ll see an infrastructure of pipes and power plants tapping into that natural source of energy. And ever since the advent of thermal-powered greenhouses—which you see glowing in the mist around Iceland—local boys no longer have an excuse not to buy their girlfriends fresh flowers.

With so much geothermal energy, Iceland is a culture of swimming pools and hot tubs. It seems nearly every visitor who can afford the steep entry fee decides to kick off or cap a visit to Iceland with a luxurious soak in the famous Blue Lagoon. This giant spa complex is just 20 minutes from the airport and 45 minutes from the center of Reykjavik. Locals say soaking in a warm, cozy tub loosens people up and gossip flows freely. Floating around in the toasty seawater surrounded by an undulating landscape obscured by steam, I eavesdropped on lots of conversations … but don’t understand a word of Icelandic.

Whether or not you can speak the language, a visit to Iceland is fun—and English is widely spoken. With steamy pools amid a bracing North Atlantic wind, grand views, and fascinating history, there’s plenty to make it worth a stop.