You could spend a whole week exploring Central Park’s 843 acres of green lawns, cultivated gardens and man-made lochs—and you’d still miss out on the secret spots that we locals have come to love. Here, Chelsea Stuart reveals where to track them down. 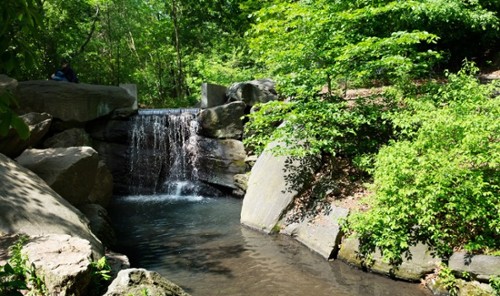 The Ravine and Loch

Tucked away in Central Park’s most sheltered corner—the 90-acre North Woods—are the Ravine and Loch, a forested canopy and stream so seemingly rural that you’d never guess they were only a short ride from Times Square. Walk along the Loch’s cascading waterfalls, (fun fact: this is NYC drinking water) and let the natural white noise drown out the city. Central Park designers Frederick Law Olmsted and Calvert Vaux cleverly channeled the Adirondacks when laying out blueprints for the Ravine, using a thick forest of oak, hickory, maple, and ash to camouflage the city’s skyline.

Where to find it: Mid-park at 103rd Street 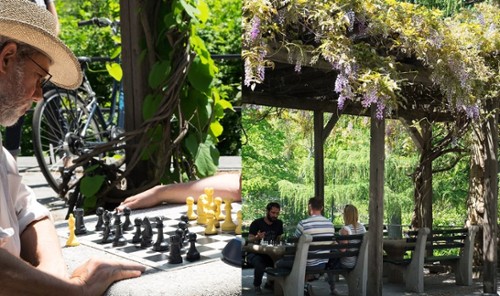 The shaded octagonal brick structure near the Heckscher Playground and Ballfield and Wollman Rink is none other than Chess & Checkers House. After the park opened in the 1860s, it faced some major criticism for a supposed lack of children’s activities (apparently providing a massive park in the middle of the concrete jungle wasn’t enough). A century later, in 1952, the park opened a visitors center where guests could sit on a wraparound porch and play chess, checkers, backgammon and dominoes on mosaic-tiled tables. If you or your little ones don’t have the patience for bishops and knights (right there with you), modern additions on lend include soccer balls, frisbees, wiffle balls and bats.

Where to find it: Mid-park at 64th Street 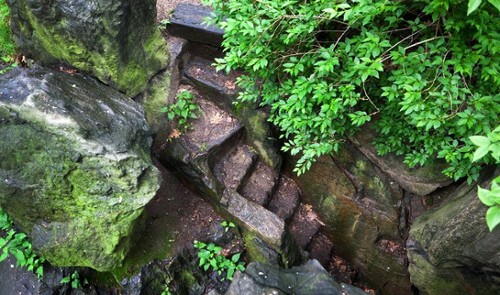 The artificial 36-acre Ramble was one of Central Park’s first undertakings. Right in the middle of the park, the remote (well, as remote as you can get in Manhattan), wooded area is known for its winding paths and bird population (230+ species can be seen throughout the year). But a lesser-known spot in the wild garden is Ramble Cave. During the 20th century, the covert cave became a criminal hotspot, and park management decided to close it off from the public. Though you can’t access it today, the descending stone steps are still visible if you know where to look.

Where to find it: The Ramble can be found mid-park from 73rd to 79th Streets, the cave is on the west shore of the Ramble, north of Gill Bridge and south of the Oak Bridge.

67 Things to Do for Free in New York 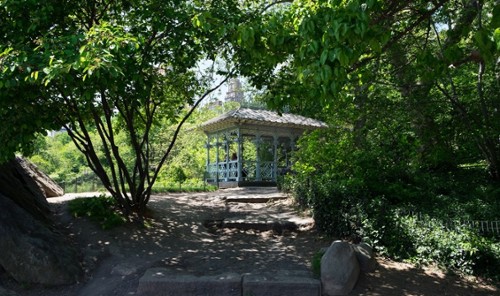 Back in 1871, the ornate Victorian-style Ladies Pavilion served as a shelter for trolley passengers waiting to catch a ride at Central Park West and 59th. In its second life, it was relocated to a secluded section of the Lake. Otherwise known as Ladies Pond, it was home to a women’s-only ice skating rink (no boys allowed!). When the 1920s rolled in, “progressive” women began inviting their beaus to skate with them and scandalously hold hands in public. The park management wasn’t pleased and shut the place down. Today, only the gray slate roof and elaborate cast iron design of the Pavilion remains.

Where to find it: West side between 75th and 76th Streets 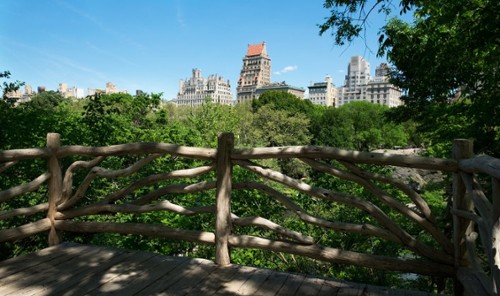 We’ve already pointed out the Ramble and North Woods, but let’s not forget the Hallet Nature Sanctuary, which rounds out Central Park’s three-piece woodland collection. Despite its location, just steps from 59th and 5th avenue, in one of the park’s busiest areas, the sanctuary has remained largely untouched. Previously inaccessible to the public and ignored even by the groundskeepers, it wasn’t until the Central Park Conservancy took an interest in restoring the area that it caught the public’s eye. Thanks to the Woodlands Initiative—a cool $40 million to be invested in Hallet, the Ramble and the North Woods—Hallet opened with regular visiting hours just this past April. Check out its brand new pathways, rustic timber-carved gate, and the sweet little sanctuary-within-the-sanctuary.

Where to find it: East Side from 60th-62nd Streets just south of Wollman Rink 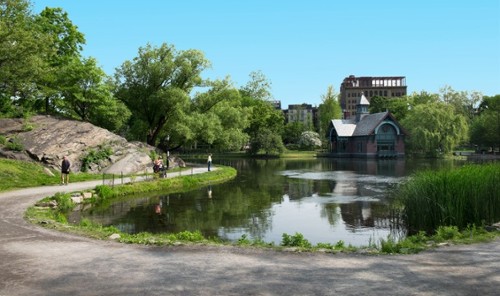 Way up at the tippity-top of Central Park is the 11-acre Harlem Meer, a nod to the neighborhood’s 17th-century Dutch settlers. The oak, bald cypress and ginkgo trees hugging the small man-made lake’s edge are worth the short subway ride. Families come out in droves for catch-and-release fishing and annual celebrations like the Halloween Parade and Pumpkin Flotilla and the winter Holiday Lighting held at the nearby Charles A. Dana Discovery Center.

Your Hot Summer in NYC 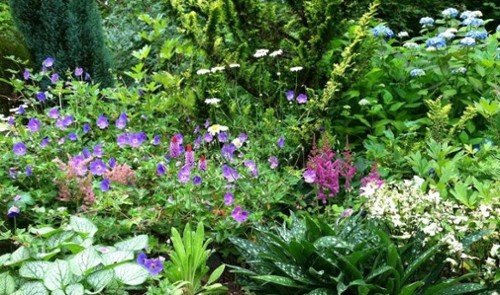 The English countryside-esque Shakespeare Garden was the 1913 pet project of Shakespeare-admirer and Parks Department entomologist Dr. Edmond Bronk Southwick. While he and the Shakespeare Society originally took care of the fledgling garden, the four-acre display owes its current glory to volunteers and the Central Park Conservancy. After it fell to complete disarray, they came to the rescue introducing new plants of Shakespeare’s choosing (columbine, primrose, wormwood, and cowslip—all lifted from his prose), freshly paved paths, rustic wooden benches and fences, and bronze plaques with some of the author’s most well-known quotations.

Where to find it: West Side between 79th and 80th Streets 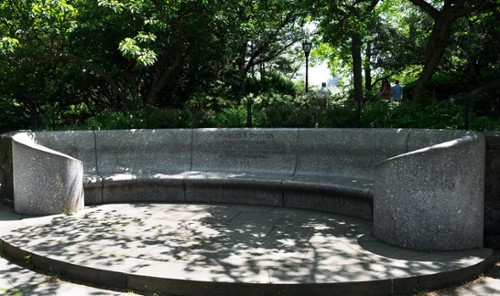 The Charles B. Stover Bench

If you’ve ever stood nose-to-wall in one of Grand Central Station’s magical whispering arches, then you’ll love the Charles B. Stover bench—affectionately known as the whispering bench. Let me break it down for you: You stand on one side of the seemingly inconspicuous bench and have someone wait on the other end. The game of telephone starts as you quietly mumble into the curved stone, and it ends with your message traveling the length of the seat, straight into your friend’s ear. Call us naive, but the 20-foot granite feat of architectural genius amazes us time after time.

Where to find it: In Shakespeare Garden, West Side between 79th and 80th Streets 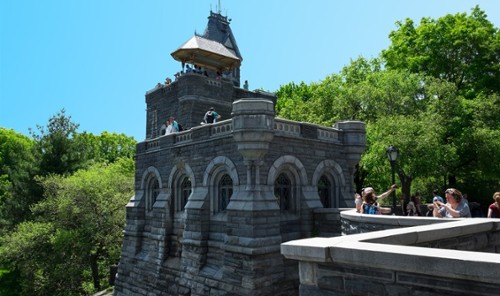 Ok, so maybe it’s not Central Park’s best kept secret, but for spectacular views and historic Central Park broadcasts, Belvedere Castle is your one stop shop. On top of Vista Rock, the circa-1869 turreted mini-castle is afforded the highest lookout point in the park, with two balconies for panoramic views of the Great Lawn, Delacorte Theater, Turtle Pond and the Ramble. Since 1919, the National Weather Service has been making use of the locale to record temperatures, rainfall and wind speed, all which can be heard via the signature “Right now, the temperature in Central Park is…” segments on local radio and TV programs. You can also pop inside to the Henry Luce Nature Observatory to take a peek at natural history artifacts or listen to an astronomy talk.

Where to find it: Mid-park at 79th Street 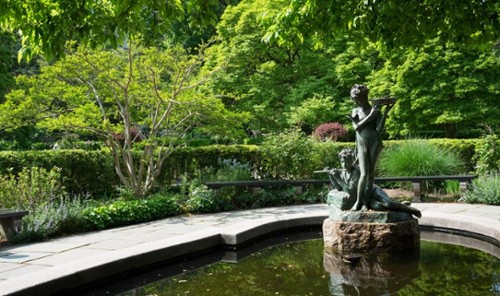 Quick history lesson: Back in the day—aka the 1800s—Central Park grounds actually belonged to the village of Seneca (news to us, too). Before the predominantly African American, German and Irish community was uprooted in 1857, they set up churches, a school and all of your typical village stuff. While there’s not much left today (just some stones and a bit of foundation) history buffs should still stop by the field where the Academy of Mount St. Vincent (which also served as a Civil War hospital, convent and art gallery) once stood.

Where to find it: East Side from 104th-106th Streets, near Conservatory Garden. Enter at Fifth Avenue and 105th Street, or 106th Street gate inside the park 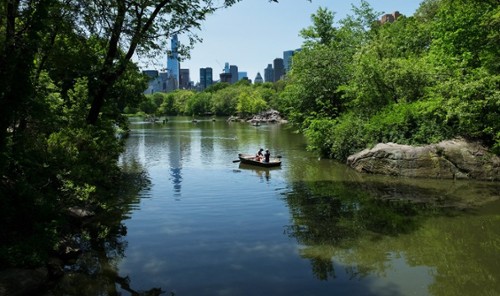 Head past the carved oak and cast-iron of Oak Bridge, to the very northern tip of the Lake, and you’ll stumble onto the small Bank Rock Bay inlet. The narrowest section of the Lake, and part of the Ramble, the area is popular among bird watchers who tote binoculars in hopes of spotting hawks, kestrel and osprey. Since 2009, the charming cove has been on the up-and-up after receiving a major bridge facelift and thousands of new plants.

Where to find it: West side of the Ramble between 77th and 78th Streets 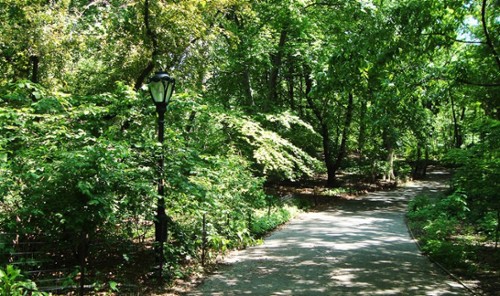 Rumor has it that deep in the thick of the Ramble lies a Christmas tree dedicated to pets who’ve passed on. Decked out in laminated photos, cherished toys, ornaments and bows, the tree attracts Central Park regulars who come to memorialize dearly departed dogs, cats and other four-legged family members. It’s become something of a holiday tradition, with touching tributes and mementos strung at the start of December and taken down at the end of the season. We’re not sure who’s behind it, but a mysterious someone stores the collection each year and returns at the start of each winter to hang them up again.

Where to find it: Deep in the Ramble

This article was originally published by Jetsetter under the headline Hidden Gems of Central Park. It is reprinted here with permission.